Apical buds were isolated from aseptically grown seedlings of pepper (Capsicum annuum L.), then they were cultivated on MS medium (Murashige and Skoog), with different concentrations and combinations of hormones. After four weeks, pepper shoots were obtained from apical buds in culture tissue in vitro conditions. After eight weeks the plantlets were transferred from sterile conditions in the laboratory to the outside conditions where the regenerate plants became adapted to the environment. Growth regulators affect the translocation of mineral substances in the vegetative organs of plant species. The aim of this research was to determine the content of certain biogenic elements and some photosynthesis pigments in pepper produced in vivo and in vitro conditions. The results showed that the plants obtained of conventional production produced in vivo, which were used as a control, compared with in vitro produced plants were significant differences in only a few of the examined features. Differences occurred primarily due to different hormonal treatment in the stages of preparation of the seedling. In vitro obtained plants have tended to preserve the juvenility characteristics i.e. rejuvenating, which characteristic is proved with the obtained results from examinee parameters

In vitro regeneration of Capsicum species has been achieved in many different tissues and organs,such as hypocotils [1,2],cotyledons [3-6],apical buds explained [7-9],stem segments [10-12] and mature zygotic embryos [13].

With using of meristem culture successful production of free of viruses could be obtained as well as elimination of some bacteria and fungi. The most important race of bacteria such as Erwinia,Pseudomonas,Xanthomonas and Bacillus as well as the most important races of fungy Fusarium,Verticillium,Phytophthora and Rhizoctonia are eliminated only with the tissue culture of meristem. There are literary data,which indicate that regulators of growth have also an impact on translocation of mineral substances in vegetative organs in different plant species [15].

Therefore,one of the main aims of this research was to determine the content of certain biogenic elements and some photosynthetic pigments in pepper produced in vivo and in vitro conditions.

In our analysis,the culture of apical buds was set in order to introduce the feature of the tissue in in vitro conditions,in particular its potential for organogenesis and regeneration in a whole plant. The fact that different growth regulators,used in different concentrations and combinations act differently to the regeneration of plantlets was confirmed.

Apical buds were isolated from seeds that are germinated in aseptic conditions (Figure 1A). The seeds were washed 15 seconds in 70% ethanol,kept 10 minutes in 1% Izosan G,than stirred 15 minutes in Na-hypochlorite and rinse three times in sterile distilled water. 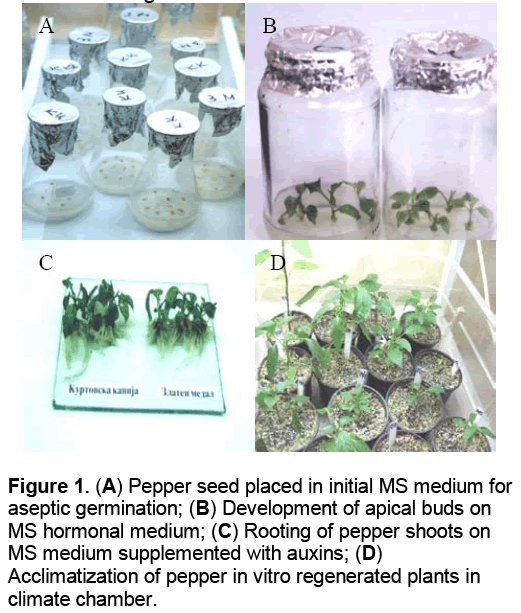 From the aseptically grown seedlings,apical buds were isolated and then they were cultivated on MS medium [16],mineral solution with 3% sucrose,0.7% agar,100 mg·l-1 inositol and 200 mg·l-1 casein hydrolysis. In the MS media plant growth regulators IAA,IBA,GA3,NAA,BAP and KIN were used and were added in different concentrations and combinations in the medium (Figure 1B,1C).

The pH of the medium before autoclaving was 5.8. Cultures were kept in a climate chamber in controlled conditions:

Well-rooted plants were transferred to plastic plate filled with sterile mixture of sand,peat and perlite (1:1:1),and their acclimatization took place in two phases: climate chamber (Figure 1D),and then transferred to greenhouse.

2.2 Determination of some biogenic elements and photosynthetic pigments

The material for analysis was taken twice in the vegetative period in the flowering phase and in the fruitful phase. The plant material (roots,steams,leafs,flowers and fruits) collected from in vitro regenerated plant and from the in vivo,conventionally grown plant,was dried until it was dry mass at the temperature of 60-80°C.

The dray plant material is used for determination of examine physiologic characteristic. The percentage of water and dry matter was calculated as the difference of the measured mass of fresh and dry condition of the plant material.

The contents of biogenic elements K,Ca,Mg,and Fe was determined in parent solution with atomic absorption spectrophotometer Perkin Elmar 5000,and the content of the P with ammoniumvandat molybdate method.

3.1 The effect of growth regulators on in vitro pepper morphogenesis

Pepper explants cultivated in the MS medium,enriched with BAP and IAA,have had a faster recovery,than those cultivated in the same medium with hormones KIN,GA3 and IAA. GA3 showed inhibitory effect on formation of plant shoots,influencing on the proliferation of callus in the medium. Root-formation of well-shaped shoots was performed on MS medium with low concentration of auxin (0.1 – 0.04 mg·l-1 IAA + 0.1 mg·l-1 IBA),which were essential for the root-formation of the plantlets. The results of the influence of different combinations and concentrations of growth regulators on callus formation,leaf rosettes and roots formation are given in Table 1.

After eight weeks,the plantlets were moved from sterile to non-sterile conditions where they adapted to the external environment. All further analyses of in vitro obtained plants,for the content of biogenic elements and some other physiological characteristics,were comparatively analyzed with the control group of in vivo plants. Significant differences showed only a few of the investigated characteristics

The results of the content of analyzed biogenic elements (P,K,Ca,Mg and Fe) indicate that there is a difference in the presence of analyzed elements in separate organs,in in vitro obtained and control plants obtained by conventional procedure in the in vivo conditions (Table 2).

The dynamic of phosphorus has a completely normal stream both in in vitro obtained plants and control plants obtained in in vivo conditions. The content of phosphorus is greater in phase of flowering unlike phase of fruiting and its accumulation in flower and fruit is evident. These element translocations in generative organs in a larger extend then in the vegetative organs,which are shown by our results too.

The content of calcium in both examined phases is the lowest in the roots and has better value in the leaf and stem. Translocation of this ion goes from the roots to the elevated parts of the plant. Affinity for calcium to the roots is less than the affinity towards other ions although its concentration in soil solution is usually eight to ten times greater than that of potassium.

The largest presence of magnesium is observed in leaves in both groups of plants. It is known that photosynthetic activity in in vitro obtained plants is started later,behind the control that is shown also with the content of exanimate chloroplast pigments in our experiment. Therefore the lower content of magnesium in leaves of regenerated plants in phase of blooming is quite logical.

In phase of flowering the value of iron in the over ground organs of regenerated plants is higher,and the content of plant pigments in the leaves have larger values in the control group plants. In phase of fruiting there is a positive correlation of these two physiological parameters,where regenerated plants have a greater value of these two parameters compare with the control.

With the exception of leaves in the phase of flowering,all other organs have greater water content in in vitro obtained plants. Regenerated plants thus containing a greater percentage of water throughout the vegetation in terms of control tend to preserve its juvenilities (Table 3). The content of the dry matter is in inverse correlation with the water content.

According to Swartz [19] and many other authors,a feature of plants obtained in in vitro conditions are often described as a "rejuvenation" where blooming is delayed (occurs later). According the same author growth regulators and their synthetic derivatives cause rejuvenation of plants obtained in in vitro conditions,and in particular gibberellins and cytokines who have the ability to extend the juvenile stages.

According to the results concerning the area of researching in the in vitro pepper production form meristem tissue,and comparing with the conventional obtained plant,the following conclusions can be made:

The development of shoots in pepper apical bud culture has shown that cytokines,in the presence of auxins in smaller concentrations,effected stimulating on the organogenesis. In this regard BAP overrides the kinetin and BAP sows the best effect on shot formation.

In vitro regenerated plants have all sort characteristics of pepper.

Biogenic elements P,K,Ca,Mg and Fe have a normal dynamic in regenerate group of plants and in the control group of plants. The content of potassium is higher in in vitro obtained plants throughout the vegetation (with the exception of the leaf in flowering phase and fruit and stem in fruiting phase),indicating that regenerated plants have the capacity for prolongation the juvenility.

Regarding the fact that the region is mainly agricultural oriented the interest for in vitro culture of some vegetable crops could be used for mass production as well as for further researches concerning tissue culture methods.