Microorganisms are omnipresent. They may be useful (e.g. Lactobacilli) or harmful (e.g. Pseudomonas, Salmonella etc) for human beings. The warm and moist environment of our surroundings including floors provides optimal conditions for their growth. There are many microbial species commonly present on the floor surfaces (Serratia marcescens, Staphylococcus aureus etc), most of which are nonpathogenic or pathogenic at higher concentrations. In order to control growth of such organisms floor disinfectants like Lizol, Dettol, Domex are commonly used. According to the Indian Medical Association, Lizol and Dettol are claimed to be the most effective disinfectants. Reports from our laboratory using in vitro analysis to check efficacy of various floor cleansers suggested Dazzl to be equally effective disinfectant as Lizol. In practice, it is impossible to maintain the conditions of the floor as it is maintained in vitro. Therefore, in the present study, experiments were designed using in vivo analysis to confirm the findings. A survey was conducted to determine consumer’s preference and preferred products were further analyzed for their effectiveness in inhibiting the growth of floor microorganisms (in vivo). Attempts were also made to study the longevity of these floor disinfectants using turbidometric analysis. Our results suggested Dazzl to be the more effective as compared to other products used for the investigation.

Drought stress comprises physical stresses that known as the most important limiting factor for plant growth and yield in most parts of the world [1]. Blum A [2] has stated drought is a multi-dimensional stress that affects plants in different levels of organization. In plant level,response to drought stress is complex because it is reflection of the combined effects of environmental stresses and corresponding reactions at all levels of organization plant in terms of time and place. From other research reported that the drought as the main factor for controlling the productions,is almost effective on all of the growth process of plant [3].

Researchers` study results shows that with increasing drought stress,amount of RWC is reduced [4,5]. Loon C D [4] stated RWC values for irrigated plants are between 100 and 80 percent and for plants not irrigated are between 76 to 87 percent. Nasri et al [5] study also showed that the tolerant cultivars are better in relative leaf water content. Bansal K C and Nagarajans S [6] expressed RWC changes in different cultivars depends on inflation leaves under stress conditions at result,leaf area and photosynthesis amount are be effected. Their I D and Pitt M M [7] concluded that the amount of RWC with transpiration rate is a correlation,so this component can be used for determination of the different cultivars in terms of drought tolerance. One of important factors on canola yield,includes premature aging effect and the amount of pigments (chlorophyll) on accumulation of seed storage substances. Loss of green pigments causes reduction of production substances such as proteins (sap raised) that have direct contact with chlorophyll [12].

This research was conducted at the Agricultuaral Research Station of Islamic Azad University,Khorasgan (Isfahan) Branch in North-East of Isfahan located in Khatoonabad village. This station is at 12 km North-East of Isfahan,longitude 51° 48` E and latitude 32° 40` north with altitude 1555 meters above sea. The climate based on Koopan classification is very hot-dry with dry summers. Long-term average annual rainfall and temperature of this region are 120 mm and 16°C respectively. Soil texture was medium with mean salt and electrical conductivity 4.3 ds/m (EC=4.3) and pH was in the normal range (pH=4.7) in 0-30 cm depth.

This experiment was performed as split-plot in the layout randomized complete block design with three replications in 2009-2010 as autumnal planting. In this study,three irrigation periods considered as the main-factor levels,including irrigation after 50,100 and 150 mm evaporation from class A pan and Zarfam,Elite,Okapi and SLM 046 canola cultivars as the sub-factor levels. Area cultivation was considered 1800 m2,length of each main plot 11 m,each sub-plot includes four 3m planting rows. Distance between rows was considered 60 cm. Density was 30 plants per square meter. Planting operations performed on October 7th 2009. Operation of bed preparation were done by goose paw plough,field cultivator and leveler. Based on soil analysis results,30 and 20 kg Urea fertilizer added simultaneous with operation of bed preparation and before renewed growth in late winter,as hand spray form and with water irrigation,respectively.

Irrigation was done four days before planting with 0.5 L Treflan herbicide. Weed Control was conducted chemical and mechanically. Five normal plants were randomly sampled from middle row in each sub-plot with considering border effects. Leaf area was measured by using “Am200 portable” model leaf area meter. To measure amount of chlorophyll a,b and total the standard method proposed by Arnon A N [11] was used. Therefore,1 gr sample of total leaf samples of each sub-plot was prepared and with 5 ml acetone 80% were beaten in the porcelain mortar. Obtained extract was purified by filter paper. Remained leftovers in the mortar was completely washed by 10 ml of acetone and passed through from filter paper. Obtained samples were as completely homogenized liquid to 10 ml volume. By spectrophotometer device read optical absorption in wavelengths 663 and 645 nm. For this,first,device was calibrated by control sample of acetone 80%. Chlorophyll a,b and total for each sample were determined by using the following formulas:

Where,“V” volume of purified solution,“W” wet weight and “D” are optical absorption in wavelengths 663 and 645 nm. In order to measure the Relative Water Content (RWC) and Water Saturation Deffiecient (WSD) five leaves randomly selected from each sub-plot and weighted. All sampling from farm was done in one day with maximum speed. Then samples put in distilled water and refrigerator temperature for 24 hours to leaves get inflammation fully. After weighting,the samples put in oven temperature 80°C for 72 hours to calculate dry weight of samples. Finally below formulas was considered to calculate RWC and WSD.

In this formula “FW” fresh weight,“DW” dry weight and “TW” are Turgor weight. 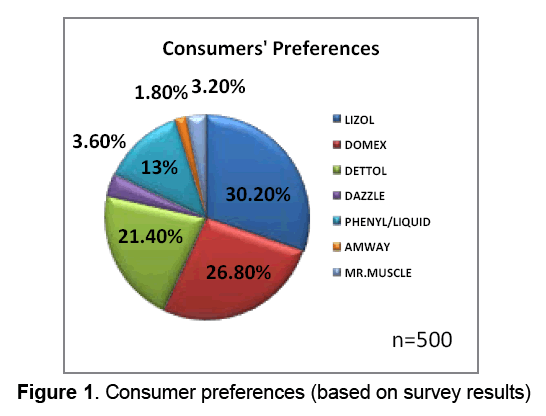 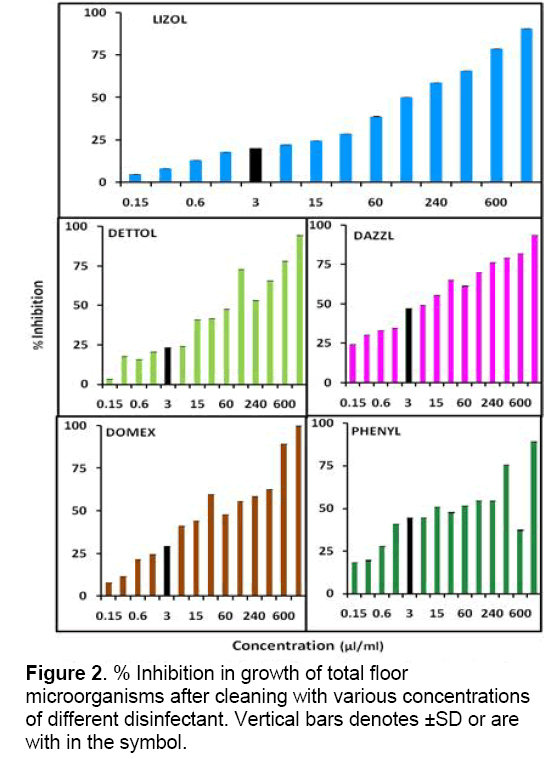 Figure 2: % Inhibition in growth of total floor microorganisms after cleaning with various concentrations of different disinfectant. Vertical bars denotes ±SD or are with in the symbol. 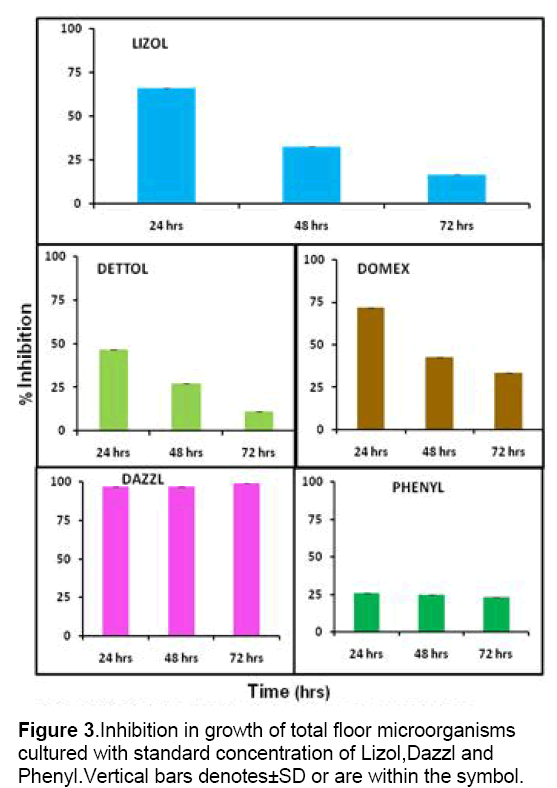 Figure 3: Inhibition in growth of total floor microorganisms cultured with standard concentration of Lizol,Dazzl and Phenyl.Vertical bars denotes±SD or are within the symbol.

In severe drought stress conditions chlorophillase and peroxidase enzymes increased,at result,chlorophyll content decreased. In results obtained by Shariat A and Assareh M H [12] and Delkhoush B et al [10] has pointed the same reasons. Also,Shahriari R and Karimi I [9] were reported amount of chlorophyll leaves of resistant cultivars get increase in stress conditions. Results of Nasri M [5] indicated increasing content of chlorophyll-a,b in autumn rapeseed resistant cultivars under drought stress. Mean comparison for the effect of different irrigation treatments on the amounts of chlorophyll showed with increasing of drought stress severity,concentration of chlorophyll-a,b and total in leaves has increased however,all of the numbers were put in same group (Figures 1,2,3,4). Taize L and Zeiger E [8] expressed that water losses causes to increasing of contraction cells that at result,causes to increasing cell concentration solution. Maybe,mild stress may increase the concentration of chlorophyll per unit leaf area,but severe stress will stop making chlorophyll. These findings are in agreement with the results given by Shahriari R and Karimi I [9] and Ward K et al [13] results. 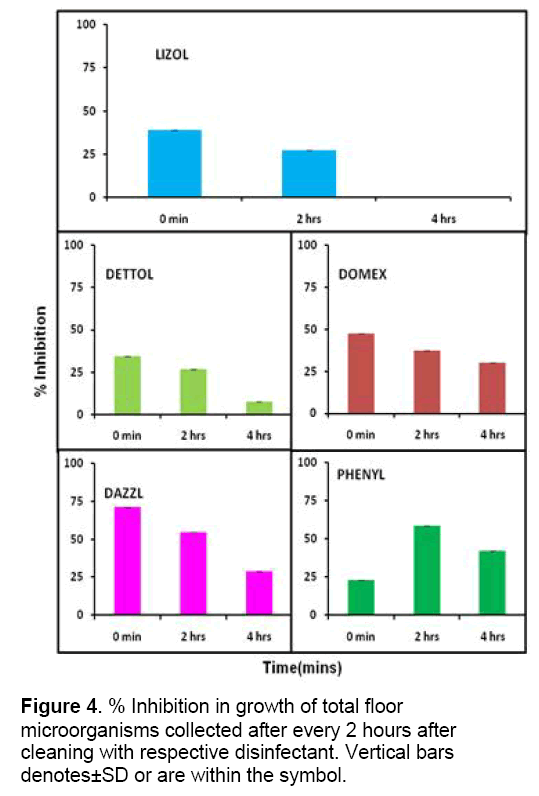 Figure 4: % Inhibition in growth of total floor microorganisms collected after every 2 hours after cleaning with respective disinfectant. Vertical bars denotes±SD or are within the symbol.

Analysis of variance showed that the affect of main factor on amount of Relative Water Content of leaves (RWC) and Water Saturation Defficient (WSD) is significant (P≤0.05) Also,the interaction of irrigation and cultivars were significant at 1% probability level.

Lowest average of RWC (Figure 5 ) observed in irrigation 150 mm and the highest in treatment 50 mm. Based on mean comparison,highest percentage RWC related to Elite and lowest related to Zarfam. Combined irrigation 150 mm and cultivar Zarfam,lowest and combined SLM and irrigation 50 mm produced highest amount of RWC (Figure 5 ). Also the highest and lowest amount of WSD were observed in Zarfam (23.12%) and Elite (16.63%) respectively. Cultivar Zarfam affected by treatment 150 mm produced most and cultivar SLM affected by treatment 50 mm produced lowest amount related to WSD (Figure 6 ). Because,Relative Water Content (RWC) contains amount of available water in leaf,increasing stress causes to decreasing it. Nasri M et al [5] declared that simple correlation coefficient between RWC and drought resistance was %99. Kaiser W M [14] findings also shows that sever reduction in RWC (less than 35%) that occur under extreme stresses can cause to cell death. Bansal K C and Nagarajans S [6] and Clarke J M and Coig M C [15] showed that stress-resistant cultivars have higher RWC,which is in agreement with the results of this study.

Comparison averages showed that highest leaf area (Figure 4 ) and SLA (Figure 7 ) is obtained in treatment 50 mm,about this,Elite and SLM had highest values. Comparison average of LWCA index showed that highest level was related to cultivar Elite (0.054 g/cm) and lowest level was related to SLM (0.039). Treatment 100 mm (0.054) had highest and control treatment (0.04) lowest amount,although this difference won't significant. As observed,cultivar Elite had more amount of chlorophyll-a and total than other cultivars; However,this cultivar possessed highest levels of chlorophyll-b,after cultivar S.L.M. highest leaf relative water content (RWC) and amount of LWCA and lowest WSD (Figure 6 ) related to this cultivar. Overall,considering the results of this research,Elite recommended as more tolerant into drought stress and irrigation after 50 mm evaporation of A pan recommended as appropriate pattern for irrigation in dry and semi-dry regions.