In present study, 37s fungal strains were isolated on PDA plate containing the 0.02% guaiacol. Out of these 37 isolates, only eight fungal isolates showed reddish brown zones on the medium. The most potent fungal strain for laccase production was screened on 0.06% guaiacol containing PDA medium. On the basis of cultural characteristics, morphological and microscopic sporulating structure it was determined that the isolated fungus belonged to the Apophysomyces sp. This novel laccase producing fungal isolate can be used for large scale production of laccase and in the treatment of various industrial effluents.

Laccase (EC1.10.3.2) is the member of the polyphenoloxidases enzyme family and it is a multicopper- containing enzyme. Laccase reduces molecular oxygen to water and oxidize substrates (diphenols, methoxy-substituted monophenols, aromatic and aliphatic amines) into free radicals [1-3]. The reducing substrate loses an electron and usually forms an unstable free radical which may undergo further chemical changes by laccase-catalysed oxidation or nonenzymatic reactions including, hydration, disproportionation and polymerization [4,5]. Laccase was first detected in the sap of the Japanese laquer tree Rhus vernicifera by Yoshida in 1883. Presence of Laccase enzymes have been widely reported in fungi, bacteria, plants and insects. Among Ascomyceteous, Deuteromyceteous and Basidiomyceteous fungi, white rot Basidiomyceteous fungi have been widely studied for laccase production and characterization [6]. White rot Basidiomyceteous fungi mostly secrete laccase and other oxidative enzyme such as peroxidise which depolymerise lignin [4,7].

Different isoenzymes of fungal laccases have been identified. Most of the isoenzymes are monomers of protein [8-10]. Fungal laccase are mainly glycoproteins with 10-20 % carbohydrate providing high stability to fungal laccase enzyme at average molecular mass of 60-70 kDa [11]. In the present study, the production of laccase at the late stage of cultivation. Our finding similar the finding of Periasamy and Palvannan [12], also studied that the secreted laccase enzyme is not a primary metabolite and it was a secondary metabolite.

Laccase have been widely studied in degradation of xenobiotics, decoulrization of dyes, depolymerisation of lignin, pigment production, pulp and paper bleaching, biosensor and biofuel cells, based on laccase, have been developed by utilizing its oxidative property and broad range of substrate specificity, laccases have been also used to prevent undesired changes in food and beverages to increase the shelf life of food and beverage products [13,14]. Keeping in view the above justification, the aim of present study was to isolate and screen laccase producing fungi from soil samples.

Soil samples and tree bark scrapings were collected from near Ambala College of Engineering and Applied Research, Ambala, (Haryana, India) in sterile plastic bags and serially diluted. Serial dilutions of 10 samples were prepared till 10-5 dilutions. 100 μl aliquot from the dilution 10-3, 10-4 and 10-5 were taken and spread on PDA plates. Samples were spread on potato dextraose agar medium that were supplemented with 0.02% guaiacol [15]. The plates were incubated aerobically at 25°C - 27°C for 5 days for fungal growth. Fungal cultures were purified by point inoculation/streaking and disc transfer method. Pure cultures were maintained on PDA slants at 40ºC for further study. The medium was sterilized by using autoclave at 121°C at 15 psi for 15 minutes. The culture was inoculated into the medium and incubated at 25°C - 27°C for 5 days.

The most potent laccase producing fungal strain was screened according to its capability of strain to grow on PDA medium supplemented with guaicaol. Guaiacol degrading fungal strain showed considerable growth and redish brown zone on medium supplemented with different concentrations of guaiacol i.e. 0.02%, 0.04% and 0.06%. Potent fungus was identified on the basis of its morphological characteristics i.e. hyphae, sporulating structure, sporocarp, arrangement of conidia and cultural characteristics i.e. colony colour, front and bottom view and texture [16-18].

A total of 37 different fungal colonies was observed and then screened for laccase production. The white rot fungus is the most common laccase producers among all fungi [19]. All fungal isolates were screened for laccase production on PDA medium supplemented with 0.02% guaiacol as substrate. Eight fungal isolates developed reddish brown zones in the medium due to oxidative polymerization of guaiacol, which marked the presence of laccase and were marked as F1 to F8. Guaiacol concentration was increased from 0.02% to 0.04% and 0.06% on different PDA plates. F1, F2 and F6 fungal strains developed reddish brown zones in the medium containing 0.04% guaiacol (Figure 1). Further, these 3 fungal strains were screened on 0.06% guaiacol out of which only F2 developed reddish brown zone in the medium (Figure 2). 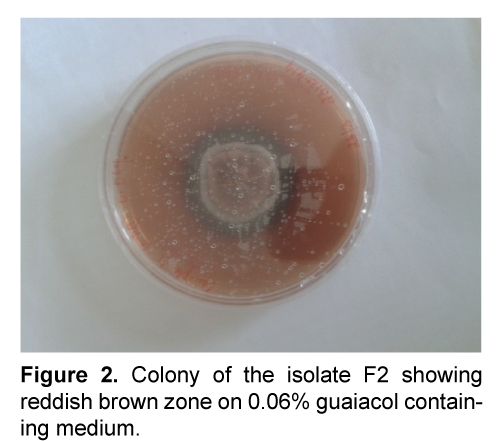 In the present study, F2 fungal isolate identified as Apophysomyces sp. (having features such as white colour colony initially and then turned creamy white to buff with age, filamentous, contain sporangiophore bearing sporangium contains sporangiospore (Figure 3) was found to be most potent laccase producing fungus (having ability to degrade guaiacol at high concentration i.e. 0.02% to 0.04% and 0.06%), out of the 37 fungal isolates. Apophysomyces is a genus of filamentous fungi that are commonly found in soil and decaying vegetation. Species normally grow in tropical to subtropical regions. The genus Apophysomyces historically was mono-specific, containing only the type species Apophysomyces elegans [20]. In 2010, three new species were described: A. variabilis, A. trapeziformis, and A. ossiformis [21]. As per our knowledge and literature search revealed that this is the first report on laccase production by the genus Apophysomyces. In the present study, the production of laccase at the late stage of cultivation. Our finding similar the finding of that also studied that the secreted enzyme is not a primary metabolite and it was a secondary metabolite [22]. 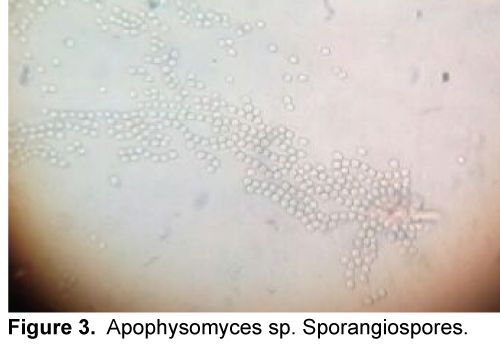 The authors are very grateful to Management of Ambala College of Engineering and Applied Research, Devsthali Ambala (Haryana) for providing the lab facilities and also encouraging us to write this manuscript.