The following study is aimed to describe the relationship of vitamin D receptor (VDR) genetic polymorphism of ApaI to the onset of type 2 diabetes mellitus and obese patients in the local population. One hundred and fifty Type 2 diabetes mellitus (T2DM) subjects and one hundred controls were taken in this study. Genomic deoxyribonucleic acid (DNA) was recovered by standard salt and ethanol precipitation. VDR polymorphism ApaI (rs7975232 G>T) was studied by restriction fragment length polymorphism (RFLP). The presence of all three fragments (217, 528 and 745 bp) after digestion with restriction enzyme indicates heterozygosity (Aa) of ApaI genotype. Results revealed no significant association of ApaI with the T2DM onset and metabolic parameters to support the hypothesis that ApaI may prone macrovascular diabetic complications.

Type 2 diabetes mellitus is a diverse group of metabolic disorders categorized by chronic hyperglycemia as the important global health problem. According to the International Diabetes Federation, diabetes is a type of metabolic disease which affects almost 415 million populations worldwide and will reach to 642 million in 2045. In South Asia, ethnicity is the major risk factor for the T2DM onset. With the limited understanding of the underlying cause of T2DM, a comprehensive acquaintance becomes vital [1,2]. Combination of genetic and environmental factors that contribute to T2DM onset are the life style, dietary habit, body mass index (BMI), hypovitaminosis D and family history. Physical inactivity and obesity are consequences of overweight which contribute to prone T2DM through insulin resistance [3,4].

The incidence of T2DM is related to vitamin D status as it participates in glucose metabolism and insulin release [5,6]. Genetic polymorphism of VDR, vitamin D binding protein (DBP) and cytochrome P450-1alpha genes can affect insulin secretion and cause insulin resistance. A number of VDR variants have been observed in the early 1990s; ApaI, BsmI, EcoRV, TaqI, Tru9I, FokI and CDX2. Recently, one of them contiguous restriction fragment length polymorphism for ApaI has not been found associated with T2DM [7,8].

Blood samples of 150 type 2 diabetic patients attending District Headquarters hospital, Faisalabad, Pakistan were collected on the basis of strict exclusion and inclusion criteria along with 100 normal individuals between January to February 2015. Ethical approval of research protocols was procured from Graduates Studies and Research Board (GSRB), University of Agriculture, Pakistan. The participants were screened for hepatitis B antigen (HBS Ag), hepatitis C (HCV) and human immunodeficiency virus (HIV) prior to scheduled bioassays.

Blood samples were collected from patients and healthy donors in 5 ml Ethylenediaminetetraacetic acid (EDTA) coated vacutainer tubes and stored in the refrigerator. Genomic DNA was extracted from the collected blood. Salting out a method for DNA extraction was implied using proteinase K, by peptide hydrolysis and a saturated NaCl solution for cellular dehydration and protein precipitation. Genomic DNA was recovered by standard salt and ethanol precipitation [9].

After amplification of the VDR fragments with the polymerase chain reaction, all the amplified fragments were digested with the specific enzyme under 25°C temperature for 15 min, allowing to assess the genotype of each individual. One VDR polymorphism was studied: The ApaI (rs7975232 G>T) with its fragments 217, 528, 745 bp.

The results were expressed as mean ± SD (standard deviation) and mean ± SE (standard error). Numerical data were analyzed using paired student's t-test, while one-way analysis of variance (ANOVA) was used to evaluate significant biochemical and molecular results. Allele and genotype frequencies were calculated and the Pearson s’ chi-square (X2) test (the statistical approach used to compare observed data we would expect to obtain according to a specific hypothesis) was used to determine their associations in the case and control participants.

The comparison of biochemical parameters between type 2 diabetes mellitus and control subjects is mentioned in Table 1.

Table 1. Comparison of biochemical parameters between diabetic and control groups.

A number of studies have focused on the relationship between T2DM onset and candidate genes. It has been found that deficiency of vitamin D linked with VDR polymorphisms is predisposed to T2DM [18,19]. Receptors for vitamin D are located in the antigen presenting cells, T cells and beta cells of the pancreas. VDR gene has been studied in various populations to find the relationship with susceptibility to T2DM and its complications but outcomes produced conflicting results [18-24]. In this study, ApaI VDR polymorphism was assessed. The aim of this study was to investigate how VDR genotypes and alleles distribution affects the prevalence of type 2 diabetes mellitus in the Pakistani population. Two different main groups were considered in the following study: T2DM patients and control.

VDR gene (exon 8) was amplified by using PCR to evaluate the ApaI polymorphism in T2DM and control groups. The product of PCR obtained was loaded on agarose gel. The fragment of exon 8 of the VDR gene is given in Figure 1. To verify all distinctive genotypes of exon 8 enzymatic digestion was done (Figure 2). The presence of all three fragments (217, 528 and 745 bp) after digestion with restriction enzyme indicates heterozygosity (Aa) of ApaI genotype. 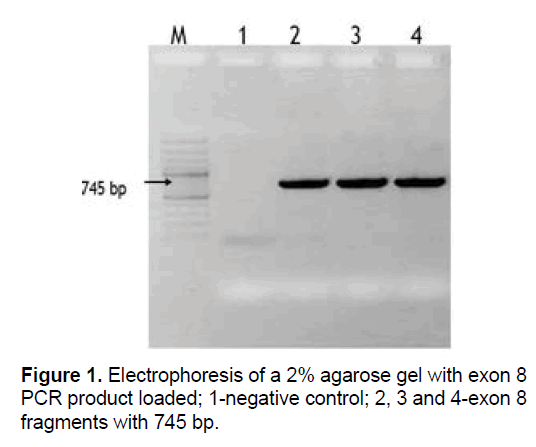 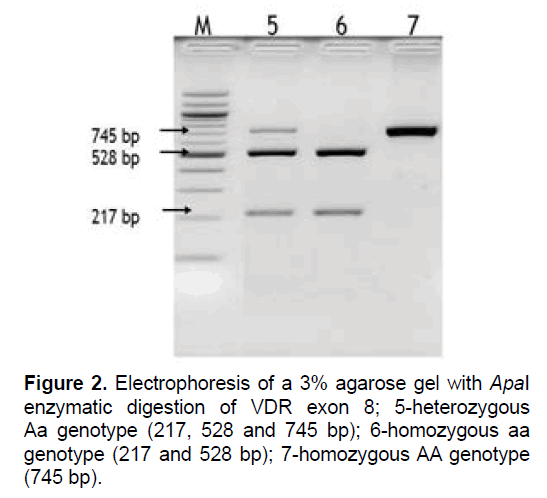 Malecki et al. [25] found no significant association of ApaI with the T2DM onset and metabolic parameters to support the hypothesis that ApaI may prone macrovascular diabetic complications. According to the present study, no statistically significant differences of ApaI allele distributions observed between T2DM subjects and control groups (Table 2). However the overall distribution of ApaI genotypes between healthy control and T2DM groups are aa 3.2%, Aa 46.0%, AA 50.8%. Many acquired and genetic factors may associate with T2DM and its complications but the exact reason of those factors that induce T2DM and its various complications including nephropathy are still not clear [26,27]. Polymorphisms in ApaI genotype of VDR gene among T2DM patients is shown in Figure 3. No significant association observed between VDR gene polymorphism (ApaI) and diabetic complications onset in terms of demographic and biochemical parameters as described by [25,27].

Table 2. Distribution of genotype, allele frequencies and carriage rate of ApaI among patients and controls.

Type 2 diabetes mellitus is a multifaceted disorder that may be developed due to the interface between environmental or acquired and genetic factors. A number of genes, such as CRP, Calpain 10, eNOS and VDR genes have been involved to develop T2DM [28]. However, VDR gene has more associations to the development of T2DM as compared to all other studied genes.

The present study validated VDR gene polymorphisms were linked with the susceptibility of T2DM in Pakistani population that can be elucidated by the differences of VDR gene variants T2DM and healthy control subjects (p<0.005). No existence of an association between T2DM and VDR polymorphisms linked metabolic parameters, including fasting glucose, HbA1c, liver function tests, renal function tests and lipid profile levels, has been described by observational studies [29,30]. VDR polymorphisms of ApaI genotype were not associated with T2DM in Moroccan population. Distribution of ApaI genotype showed non-significant statistical difference between the healthy subjects and T2DM patient. In agree with present results, the meta-analysis of the association between onset of T2DM and ApaI showed the nonsignificant results [31]. In contrast, a chines study found that ApaI genotype of VDR gene polymorphism was linked with T2DM [32]. Previous studies of candidate gene polymorphism and genome wide association studies have concentrated on the relationship between onset of T2DM and VDR gene, but outcomes have often been fickle among different populations. Mostly the discrepancies between these studies may be because of false positive finding, duplication study lacks power, heterogeneity among studies and heterogeneity transversely studies [33,34].

Results revealed no significant association of ApaI with the T2DM onset and metabolic parameters to support the hypothesis that ApaI may prone macrovascular diabetic complications.