The paper systematically studies the manufacture of aqueous vinyl polymer solution-isocyanate adhesive (API) through utilizing esterified corn starch. Taking the certain acid and basicity as condition, corn starch was esterified to form emulsion that was condensed with synthesized no poison, no environmental pollution rubber emulsion to manufacture the main agent of API; Isocyanao compound which isocyanate group were taken as curing agent of API adhesive. Main agent and curing agent made up double component API adhesive which have no formaldehyde emission and improve water resistance. After production experiments in three layers composite flooring board, blockboard, plywood, laminated stuff and other bond products with this API adhesive proved, all performance indexes were passed and there were no poison materials emission from products. This API adhesive not only operated easily in production but also met the need of present technology. Besides, its cost is half of other import adhesives, so API adhesive we had manufactured obviously social environmental benefits and economic profits.

API adhesive belongs to non-formaldehyde adhesives and solves formaldehyde release completely. However, API adhesive has its disadvantage, for instance, high viscosity, short working life, high cost and so on. All of these limited application of API adhesive. Here, we researched utilization of corn starch’s esterification and then manufactured an API adhesive. This API adhesive is of no poison, no environmental pollution, low cost, long working life, low apparent viscosity, good prepressing performance. In addition, it has excellent weather resistance, water resistant and resistance to high temperature. All of above performance is because of esterified corn starch emulsion itself. The API adhesive is used in production of plywood, blockboard and three layers composite flooring board and all of these experiment results were excellent.

Water soluble polymer solution was dumped to the four-hole round bottom flask which was equipped with stirrer, reflux condenser, dropping funnel and thermometer. The solution was adjusted by compound basicity catalyst and its pH value range from 7 to 11. After starting stirrer, the corn emulsion that consistency controlled between 35 percent and 40 percent was added to flask slowly, then emulsifying agent which was two-thirds amount of the total. Through putting in compound basicity solution and biatomic aid alternately with dropping funnel, the solution’s basicity ascend to 11, then drop to 7 because of biatomic acid. The procedure above was repeated till all of biatomic acid was finished. Then the emulsion pH value was adjusted to between 7 and 9 with sodium hydrogen carbonate solution. The best reaction temperature was from 25 to 30 because of secondary reaction increase in high temperature. Duration of the reaction ranges from 1 hour to 6 hours. When the reaction trend to finish, pH value changed slowly. At last, adding one-third emulsifying agent remaining stirred 30 minutes, then laid aside.

We added proper amount of wheat flour to esterified corn starch emulsion, its solid content increase to 45 percent and stirred at the same time. Then we pressed three-layer plywood and saw test pieces on the basis of GB/t9846-1988. Dry strength and wet strength were determined.

We do variance analysis to the test result. That showed: A2B2C1 was the best combination to dry strength, but any of combination can’t meet the need of national standard in wet strength.

On the basis of experiment and analysis above, ECSE was not water resistant which limited its application extremely. According to use purpose and structure trait of ECSE itself as well as experiment grope, foreign research experience, we decide to use rubber emulsion to polycondense with ECSE to modify. This method drew into polar group which can react with hydroxy in the wood. The modified emulsion was the main agent of API adhesive.

In the API adhesive system of ECSE as main agent, isocyanate group crossed bonding with active compound. In order to increase water resistance, we had to decrease amount of hydrophilic group of ECSE or increase average molecular weight of emulsion polymer, meanwhile we should drew reactivity group into rubber emulsion which copolymerize ECSE in the proper condition and formed copolymerization emulsion.

Mixture ratio of carboxy group-nitrile rubber emulsion (CNRE represented hereafter) and ECSE was different along with bonding technology of API adhesive. For example, the use amount of CNRE decreased properly when hot pressing while increased when cold pressing. Experiment testified that the ratio of amount of CNRE and ESCE range from 10 percent to 30 percent. Before ECSE was modified, we had considered the compatibility of the two kinds of emulsion. We had considered the following aspects as main factors: solid content, pH value, viscosity of the emulsion before mixture and after mixture.

The ratio of CNRE and ESCE (emulsion weight ratio) was 10:9; 20:8; 30:7 respectively. The main performance changes of the emulsion before mixture and after mixture are listed in Table 3. 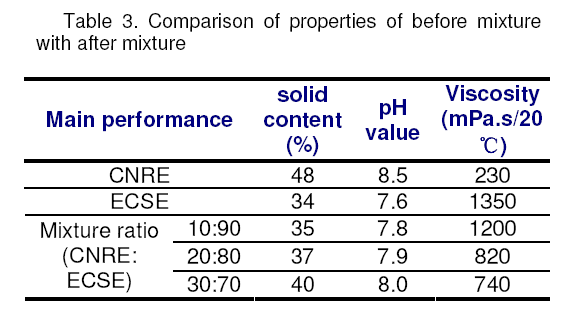 3.2.2 Blending and copolymerizing modification experiment of CNRE and ECSE

3.2.2.1 Determination of factor and level

In order to decrease interfacial tension between dispersed phase (ECSE, CNRE) and continuous phase as well as emulsify the polymer further, compound anionic surfactant and non-ionic surfactant were used largely. Meanwhile, continuous phase (PVA) as stabilizer of mixed emulsion should be added. According to mixed reaction system’s characteristic, we determined the following changed factors and their levels which are listed in Table 4, fixed factor and corresponding level which are listed in Table 5. We used orthogonal layout of L9(34).

Because isocyanate group reacted with water, we had to try every means to stabilize isocyanate group in order to make it compound with water. The method must protect isocyanate group to react with base material not water. To preventing isocyanate group function to water and other active matter, lengthen working life of adhesive, we adopted a compound that can react with -NCO group and in certain temperature it can release -NCO group. The following was this balanced reaction: O=C=N--R-- N=C=O +2Ar--OH===Ar-OOCNH--R--HNCOO--Ar. Regenerated temperature of the sealant depended on its property. Regenerated temperature of hydrosulfite was 50 centigrade degree that can meet the need of plywood, composite flooring board and blockboard. The reaction was as follows: OCN～R～ NCO+2NaHSO3—NaO3SOCNH～R～NHCOSO3Na +API—ternary space-network structure.

5. Use of extender in main agent

The purpose of using extender in adhesive system was to improve some properties of adhesive, decreased the cost and endowed its some new functions. In the course of bonding, extender can fill up small opening of glued materials, meanwhile, it also can prevent outer layer starved gluelines because of adhesive permeating excessively. Besides, adhesive would contract during curing. Adding extender not only adjusted contraction percentage but also decreased internal stress of glued joint to acquire good bonding effect.

In this research, we chose several kinds of extender in common use. First of all, we tested compatibility between the extender and parent emulsion, then culled better of them to do next experiment. The extenders we chose were: flour, light calcium carbonate, activated calcium carbonate, talcum power, refined barium sulfate and alta-mud. In room temperature and in high temperature extender was added to mix directly. In order to solids content of parent emulsion more than 45 percent, adding quantity was not low 10 percent of weight of parent emulsion. Then strength of rupture test and immersion test were checked.

The data of experiment showed: refined barium sulfate as extender, its value of strength of rupture and ratio of immersion met the need of national standard. So we determined refined barium sulfate was this experiment extender. Addition amount was different according to different using target of API adhesive and produce condition in the factory to adapt the demand of pressing board technology.

6. Use level of crosslinking agent and its effect to adhesive

Poly-isocyanate possessed the trait of high polarity and high activity. It can react with any component of the main agent. So bonding property of adhesive changed with use level of crosslinking agent. Its change degrees are listed in the Table 6. 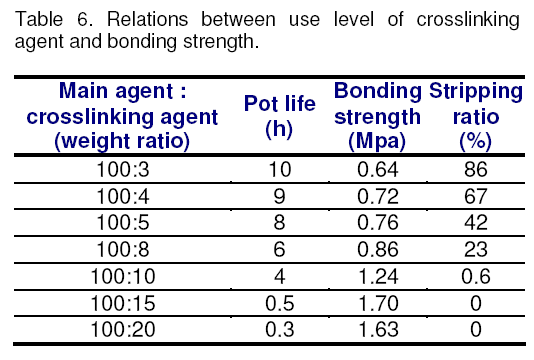 This experiment was done in Dun Hua Jin Hai Wood Company. All of equipment we used belonged to this company.

API adhesive modified by corn starch was manufactured in adhesive factory of Huang Ni He Forestry Company. The total amount was 3.24 ton. All of these were used to plywood production.

Tree species of veneer: face veneer and back veneer were linden.

Glue regulating condition was the same with experiment condition in lab.

35 cubic meter plywood were manufactured. All of these were checked by National Wood-based Panels Quality Supervision Test Center (Test was according to GB/T9846-88 and JAS MAFF Notification No.920). Results are listed in Table 7. It shows that every physical mechanics properties of plywood we pressed all passed international plywood standard of Ⅱ class, formaldehyde emission content passed zero class (<0.5mg/L) of JAS MAFF, Notification No.920. So this adhesive can take the place of UF resin adhesive completely to produce environmental plywood.

This experiment was done in Jilin Fu Chun Wood Company. API adhesive modified by corn starch was manufactured in adhesive factory of Huang Ni He Forestry Company. Total was 92.84 ton. All of these were used to blockboard production. 21.65 cubic meter blockboard were manufactured. Among them, face veneer of 1040 cubic meter blockboard was linden which were exported to Japan. The rest face veneer was lauan which were sold to Beijing, Shenzhen, Xi’an, Shenyang in domestic market.

Hot pressing technology was the same that of UF resin adhesive.

All of blockboard we pressed were checked by National Wood-based Panels Quality Supervision Test Centre (according to GB/T17657-1999 and JAS MAFF, Notification No.920). Test results are listed in Table 8.

This experiment was done in Jilin Xin He Wood Company. API adhesive modified by corn starch was manufactured in adhesive factory of Huang Ni He Forestry Company. Total was 2.2 ton. All of these were used to produce of three-layer wood composite flooring board which were 564 cubic meter. Pass percent of the products was 98 percent and all were exported to Europe.

Hot pressing technology was the same that of UF resin adhesive.

Three-layer wood composite flooring board we manufactured (product specifications: 2200 × 202 × 14.5) were checked by National Wood-based Panels Quality Supervision Test Centre (Test was on the basis of GB/T18103-2000), test results are listed in the Table 9. 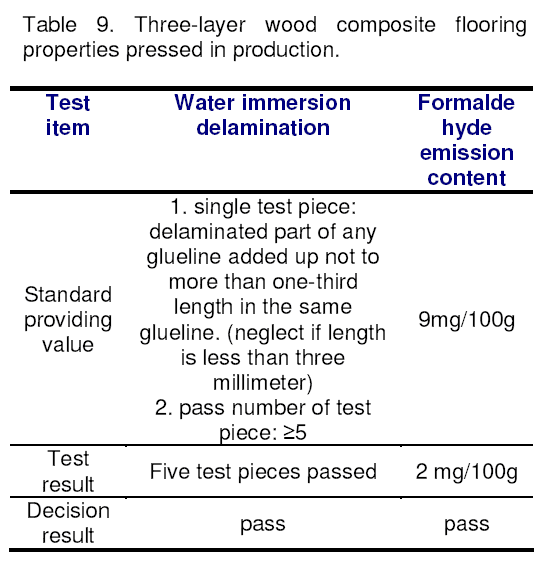 This experiment was done in Jilin Ya Sen Company. API adhesive modified by corn starch was manufactured in adhesive factory of HuangNiHe Forestry Company. Total was 1.2 ton. All of these were used to produce Oak laminated stuff which was 345 cubic meter, then manufactured furniture to export.

Board quality: no defects in adhesive

Oak laminated stuff we manufactured were checked by National Wood-based Panels Quality Supervision Test Centre (Test was on the basis of JAS No.111- 1996), test results are listed in Table 10. 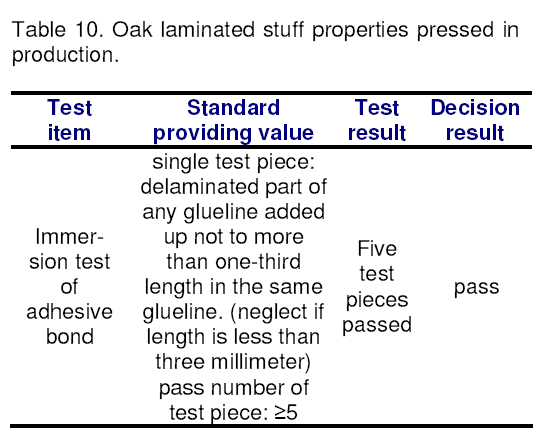 Bonding experiment of wood-based panels above proved that it was feasible in production practice that API adhesive modified by corn starch was used to glue no matter hot pressing or cold pressing.

The formulation above was the best in this experiment which was received in certain condition, so the result had limitation. The formulation needed to adjust to use in concrete application to meet the need of production. After productivity practice, the result proved that API adhesive we researched can be used to glue three-layer wood composite flooring board, blockboard, plywood and laminated stuff which physical mechanics properties passed according national standard. Besides, their operating performance was excellent that make it ease to manufacture and apply. According to nowadays chemical material price, the cost of this water based polymer-isocyanate adhesive was only the half of same kind of import adhesives. So it would bring huge economic benefit if it was used largely. Formaldehyde emission content in bonding product passed national standard about environmental bonding product used in room that had obvious social benefit. 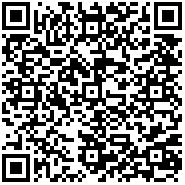