The increase in antibiotic resistance has resulted in a decreasing number of fully active antimicrobial agents available to treat infections by multi-drug resistant (MDR) bacteria. This has necessitated a search for new antimicrobial agents. Though these plants are used for various purposes, but there are plants that the medicinal properties of the plants were not investigated. The major aim of this study was to determine the antimicrobial activity of the extracts of Glaucium elegans and Saffron (Crocus sativus .L) Onios plant species against Escherichia coli, Staphylococcus aureus, Salmonella enteritidis, Bacillus anthracis and Proteus. The extracts of medicinal plants were prepared using Soxhlet apparatus for methanol extract. The antibacterial activities by agar disc diffusion and serial dilution assays; the inhibitory zones were recorded in millimeters. The methanol extract of Glaucium elegans was found to have a significant antibacterial efficiency (p ≤ 0.05) as compared to the methanol extract of Onios plant. The methanol extract of Glaucium elegans showed high antibacterial potential (23 mm) against Proteus at concentration of 1500μg/disc. On the other hand showed highest antibacterial activities (22 mm) against Staphylococcus aureus at concentration of 1500μg/disc. These finding pinpoint the efficiency of these extracts to inhibit microbial growth. The bactericidal activity described here represents an added safety value for Glaucium elegans as a means of eliminating a possible antimicrobial during storage.

For over thousands of years now, natural plants have been seen as a valuable source of medicinal agents with proven potential of treating infectious diseases and with lesser side effects compared to the synthetic drug agents (1). Numerous studies have shown that aromatic and medicinal plants are sources of diverse nutrient and non nutrient molecules, many of which display antioxidant and antimicrobial properties which can protect the human body against both cellular oxidation reactions and pathogens. Thus it is important to characterize different types of medicinal plants for their antioxidant and antimicrobial potential (2-4). The world health organisation estimates that 80% of the people living in developing countries almost exclusively use traditional medicine. Medicinal plants form the principle component of traditional medicine (5). Aromatic and medicinal plants are known to produce certain bioactive molecules which react with other organisms in the environment, inhibiting bacterial or fungal growth (antimicrobial activity) (6). The genus Glaucium Mill. Belongs to Papaveraceae family and consists of 25 species, annuals, biennials and perennials. They grow in middle and South West Asia and Europe (7). This genus consists of herbaceous plants. Cullen (1966) in Flora Iranica area recognized 11 species, 10 of which occurring in Iran, one including two subspecies. Mobayen (1984) described two new species, namely G. elegantissimum Mobayen and G. mathiolifolium Mobayen. Later on Mobayen (1985) in Flora of Iran, vascular plants apparently recognized 14 species in Iran, several of them including subspecific taxa (8). Saffron is the most expensive spice in the world and consists of the dried stigmas of Crocus sativus L. By far the most important producer is Iran, followed by Greece, Morocco, India, Spain and Italy. Saffron is greatly appreciated for its abilities of colouring and flavouring, and for its aromatic strength. These properties are basically related to its contents of picrocrocin, safranal and crocins (9). Picrocrocin is the glycoside precursor of safranal (2, 6, 6-trimethyl-1, 3-cyclohexadiene-1-carboxaldehyde), which is in turn the most abundant of the volatile compounds responsible for the aroma of this spice (10).

Spices have been used since ancient times to hide spoilage in foods. Nonetheless, as with many other agricultural products, spices can suffer microbial contamination and their additions to ready-to eat foods can result in the proliferation of bacterial pathogens (11,12). The wide use of antibiotics in the treatment of bacterial infections has led to the emergence and spread of resistant strains (13). The antimicrobial compounds from plants may inhibit bacteria by a different mechanism than the presently used antibiotics and may have clinical value in treatment of resistant microbial strains. Because of the side effects and bacteria resistance against the antibiotics, the scientist developed new drugs from natural sources such as plants, which have been extensively used as alternative treatment for disease (14, 15). The purpose of the present study was to investigate antimicrobiyal properties of Glaucium elegans and Saffron Onion. In this paper we report the results of such studies in order to orient future investigations towards the finding of new, potent and safe antimicrobial compounds.

Glaucium elegans and Saffron Onion were collected from different natural habitats of the country. The Onion of Saffron and Leaves and twigs of Glaucium elegans separated and dried in dark at room temperature. In order to extract content of 12 g fresh sample prepared with distilled water and poured into an Erlenmeyer flask and heated for 30 min at 100 °C was boiled. The extracts were filtered using Whitman Strainer paper and then in Dry Heat of 55 °C for 24 h were exposed to the extract powder is produced. One gram of the powder, each of which was dissolved in 10 ml of Deionized water. Different concentration (250, 750 and 1500 μg/disc) and the extracts were prepared calculated.

Five pathogenic bacteria including five strains of Staphylococcus aureus, Escherichia coli, Salmonella enteritidis, Bacillus anthracis and Proteus were used for the bioassay study. The pure strain was identified and obtained from Microbiology and Biotechnology Laboratory, Department of Islam Islamic Azad University, Shahrekord Branch, Shahrekord, Iran. All cultures were incubated at 37 °C in aerobic conditions. The test organisms were transferred to the agar slants from the supplied pure cultures with the help of an inoculating loop in an aseptic condition. The inoculated slants were then incubated at 37.5 °C for 24 hrs to ensure the growth of test organisms. These fresh cultures were used for the sensitivity test.

Three types of discs were prepared for antibacterial screening. Sterilized (BBL, USA) filter paper discs (5 mm in diameter) were taken in blank Petri dishes. Sample solution of desired concentration (10μl/ disc) was applied on the discs with the help of a micropipette in an aseptic condition. These were used to compare the antibacterial activity of test material. In our investigation, Gentamicin (1.25 μg/disc) was used as standard disc. These were prepared by using identical filter paper (5 mm diameter) and same volume of residual solvent in the same condition. These were used as negative control to ensure that the residual solvent and the filter paper themselves was not active.

Placement of the discs and incubation

The dried crude extract separate discs and standard discs were placed on the solidified agar plates seeded with the test organisms. The plates were kept in a refrigerator at 4°C for 24 hrs in order to provide sufficient time to diffuse the antibiotics into the medium. Then the plates were incubated at 37.5°C for 24 hrs in an incubator.

Measurement of the zones of inhibition

After incubation, the antibacterial activities of the test samples were determined by measuring the diameter of inhibitory zones (mm) with a transparent scale.

The data were analyzed using Analysis of Variance (ANOVA) test. A one‐way ANOVA was performed on all results. Probabilities of less than 0.05 were considered statistically significant. Differences between means were determined using Duncan compromise test. The software SPSS (Ver. 17) was used to conduct all the statistical analysis.

The tests for antibacterial effect establish of vegetal extracts revealed that most of the extracts are representing an important source of substances with antimicrobial activity. The results of different studies provide evidence that some medicinal plants might indeed be potential sources of new antibacterial agents (16). The antimicrobial activity of extract having differen concentrations (250μg/disc, 750μg/disc and 1500μg/disc), was tested against five pathogenic bacteria. Gentamcin disc (1.25μg/disc) was used for comparing the antibacterial activity. Tables 1 represent the inhibition zone, found by the activity of extracts on microorganisms tested and compared with Gentamicin. At 250 μg/disc dosage extract of Glaucium elegans showed 1, 2 and 1 mm zone of inhibition against E. coli, Proteus and B. anthracis respectively. However no antimicrobial activity was observed against S. aureus and S. enteritidis the same concentration.

At 750μg/disc Concentration of G. elegans, the zone of inhibition against the same bacteria was 10, 18, 12, 9 and 17mm respectively against E. coli, Proteus, S. aureus, S. enteritidis and B. anthracis respectively. In case of highest dose of 1500 μg/disc dosage extract of G. elegans, the zones of inhibition were found to be 13, 23, 22, 13 and 21mm respectively (Figure 1). At all concentrations dosage extract of Saffron Onion no antimicrobial activity was observed against bacterias. But the standard antibiotic disc Gentamycin (1.25 μg/disc) showed the zone of inhibition against five bacteria such as E. coli, Proteus, S. aureus, S.enteritidis and B. anthracis. The zones of inhibitions were 27, 19, 26, 25 and 28mm respectively. Tested essential extracts most antimicrobial effect of the Proteus strains including the strains with resistance to antibiotics. It can be concluded that G. elegans has a wide range of antibacterial activity as medicines. Also in research on extract of S. mirzayanii demonstrated antimicrobial effect against S. aureus and E. colli (17). In other study assay, the methanol extract of red variety was found to have a significant antibacterial effect against S. aureus, E. colli (18). In summary, the results obtained in this work indicate that G. elegans extracts could be an important source of antibiotics compounds potentially active against bacterias. The G. elegans extract assayed has been demonstrated to be useful against E. coli, Proteus, S. aureus, S. enteritidis and B. anthracis strains with antibiotic resistances. 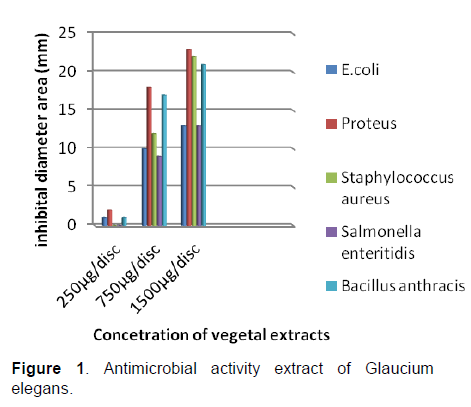 We would like to thank head and deputy of research of Islamic Azad University of Shahrekord branch in Iran and Young Researchers and Elites Club for their sincere support.