The effect of Humates and silver nitrate on organogenesis of cotyledon and hypocotyl explants of four sweet pepper (Capsicum annuum L.) varieties was investigated. The rate of plant regeneration was found to depend on genotype, explant type and culture medium. The cotyledons were more effective as explants for bud induction and subsequent plant elongation than hypocotyls. The highest regeneration frequency (2.35 plants per explant) was achieved in cotyledons from variety Maritsa on culture medium supplemented with 0.2 mgL-1 AgNO3. The medium containing 5.0 mlL-1 Humates promoted plant regeneration in hypocotyls. Differences in morphological characteristics and pollen fertility between seed-derived and in vitro regenerated plants grown in greenhouse conditions were registered.

Pepper is one of the widely spread vegetable in the world. This fact is due to the high biological value of the fruits (high content of dry substance,polivitamins,mineral substances,essential oils). Bulgaria is famous as a secondary center of pepper origin. The specific local genetic diversity is typical,well-adapted to this region and could be used as a base for improvement of some breeding characteristics of interest for the development of new varieties and F1 hybrids,including by modern biotechnological methods.

As reported in the most published papers plant tissue culture and genetic engineering in sweet pepper is still limited due to difficulties with low efficient system for plant regeneration and developing of the shoots to normal plantlets [1-3]. In cotyledon explants [4] observed developed of leaf-like structures and rarely normal shoots. These authors obtained low number of plants after transfer onto elongation medium what seems to be a consequence of teratological developmental process,frequently associated with fasciated and degenerative meristems,rather than a defect in shoot development from available meristems.

Research experiments for establishment of optimal conditions for induction of organogenesis and regeneration prove the influence of the genotype,explant type and culture medium composition on these processes [5-7]. Regenerants have been obtained from cotyledons,hypocotyls,leaves,shoot-tips and nodal segments from different Capsicum ssp. and varieties [8-12] in hormone free or hormone supplemented medium [13-16]. However,all these researches reported low regeneration efficiencies and genotype specific reaction in the process of plantlet regeneration in Capsicum ssp. [17].

The importance role of higher copper (Cu) levels in the medium for shoot bud differentiation and elongation was emphasized by [18]. Some authors proved that silver nitrate (AgNO3) significantly increased the frequency of shoot induction in different pepper varieties [19,20]. Franck-Duchenne et al. [21] used the plant hormone 24-epi-brassinolide to stimulate adventitious bud and shoot elongation. In the first experiments on in vitro morphogenesis of Bulgarian pepper varieties [22] reported for callusogenesis and rhizogenesis but lack of plantlet regeneration what prove the specific recalcitrant nature of local pepper germplasm.

Plant material and in vitro conditions

For shoot induction cotyledon (0.5 cm2) and hypocotyl (1 cm) segments of 7-9 days old seedlings were cultured on MS0 medium,3% Sucrose and 0,7% Agar. The next 8 variants were studied:

A stock solution of AgNO3 (Merck) was stored at 4ºC and added into the autoclaved medium after filter sterilization.

The explants were incubated in growth chamber at 25ºC ± 1ºC temperature,a photosynthetic proton flux density (PPFD) of 200 μmol m-2 s-1,16/8 h photoperiod and subcultured at intervals of two weeks to the same medium.

Elongated shoots (2-3 cm) were cut and transferred on rooting medium consisting of half strength MS0 medium supplemented with 0.1 mg/l IAA,2% Sucrose and 0.7% Agar. Planlets higher than 4-5 cm were planted in pots containing perlite and after 10-12 days of adaptation in wet chamber were transferred in 5 l containers with mix of turf and perlite (3:1) and grown in green house.

The experiment was repeated two-times in three replications with 20 explants in each for the different genotypes,medium variant and explant type. The callusogenesis,regeneration frequency (% explants with regeneration) and number of regenerants per explant were examined for a period of 90 days. Survival plants (determined 2 weeks after transference to soil),plant height (cm),fruit weight (g),and pollen fertility (%) of the regenerants and seed-derived plants (as controls) were evaluated. Data were calculated by analysis of variance (ANOVA) followed by Duncan’s multiple range test.

Pepper cotyledon and hypocotyl explants reacted with callusogenesis in all studied medium variants. Callus induction was registered in all four tested genotypes. The induction of white or slight green callus was observed 10-12 days after incubation in the wounded explants edges and formation of shoot buds – about 20 days of cultivation (Fig. 1a,b). Depending of the genotype and culture medium variant the callus morphology was different. In cultivars Hebar and Kurtovska kapiya 1619 callus was hard and dense without shoot formation but in Maritsa and Stryama – friable and whitish with leafy structures and elongated shoots (Fig. 1c,d). 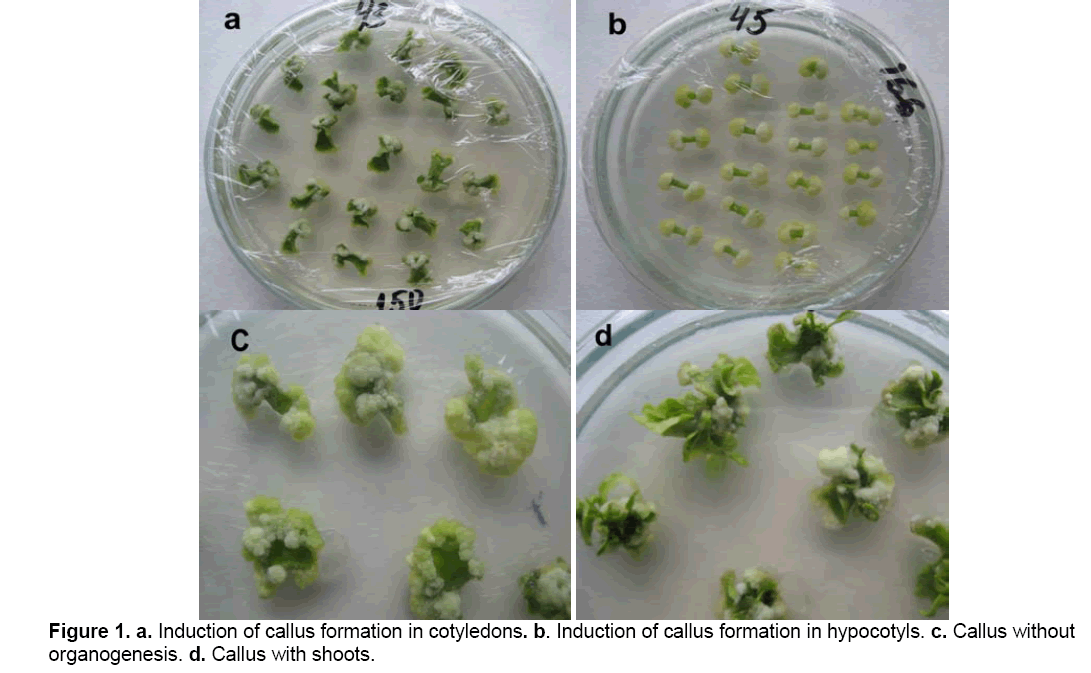 The data from Fig. 2 prove that compare to the control variants the incorporated in the medium Humates and AgNO3 had positive effect on the plantlets formation in studied pepper varieties,but the level of regeneration depends on the genotype and explant type. The medium variants 1 and 2 with 5.0 mlL-1 Humates stimulate the regeneration in both type of explants – hypocotyls and cotyledons while in the control I (without Humates) organogenesis and shoot formation were sporadic and abnormal (from 0.0 to 8.7% respectively). Cotyledon explants were found to be more responsive than hypocotyls in medium containing 0.2 mgL-1 AgNO3. When 0.5 and 1.0 mgL-1 AgNO3 were used in variants 4 and 5 the inhibition of organogenesis in the both type of explants was observed.

Figure 2: Effect of culture medium on regeneration capacity in pepper. 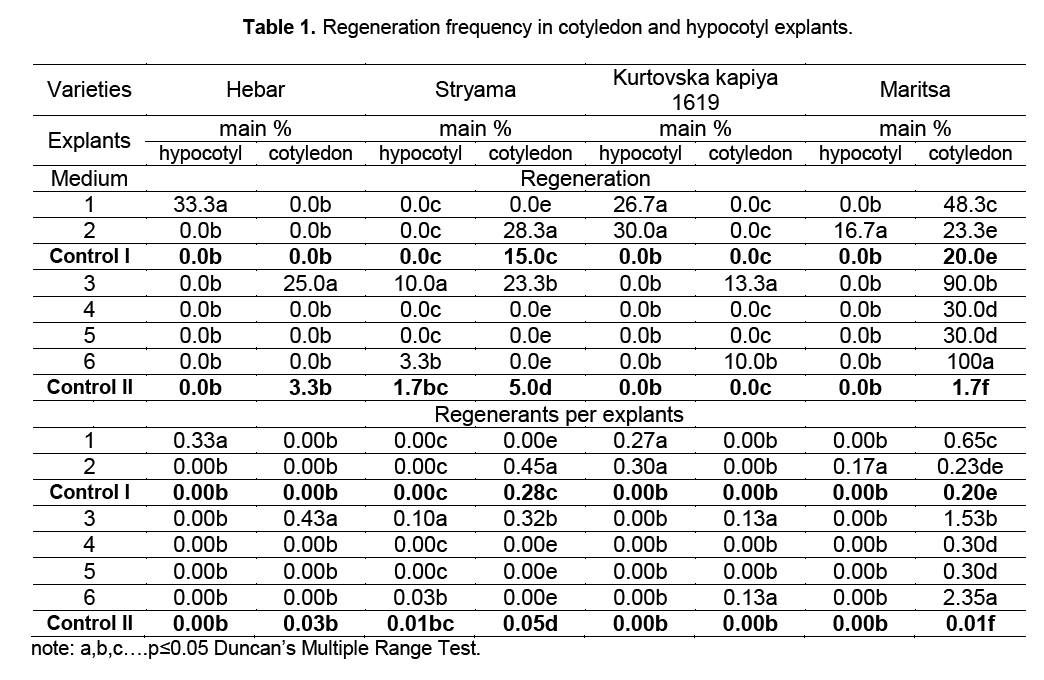 Data from two-way factorial analysis of variance showed statistically significant differences on the influence of genotype and medium variant on the regeneration response of the both explant types. In cotyledon segments the strongest was the influence of genotype,while in hypocotyls regeneration was determined by the interaction of both factors (genotype and culture medium) (Table 2). 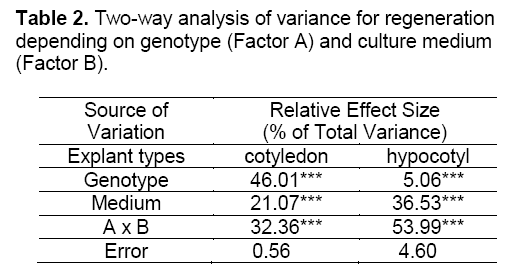 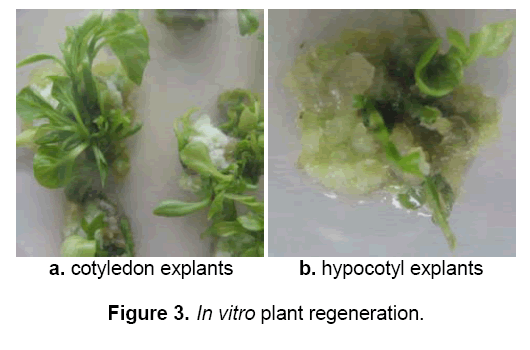 In order to use tissue culture as a tool for creation of genetic diversity is important to analyzed survival rate and some morphology traits of plant-regenerants. From all in vitro rooted and grown plantlets from varieties Stryama and Maritsa 76.0% survived in the period of adaptation in vivo. The plant survival index of variety Stryama was higher (83.3%) compare to variety Maritsa (68.7%). The plant height of the regenerants from the both studied varieties was significantly lower,with small sized leaves and fruits than these of the control plants (Table 3). The differences in the pollen fertility between regenerants and seed-derived plants were registered – in variety Stryama 77.0% and 87.7% respectively and in variety Maritsa – 54.1% and 82.5% respectively.

Capsicum spp. has been categorized as one of the most recalcitrant plant species to in vitro manipulation. The major difficulties to sweet pepper plant regeneration are the lack of elongation of newly formed buds or producing rosettes of distorted leaves which do not develop to normal shoots [1].

The promotory effect of AgNO3 on regeneration has been repoted in several plant species as: cucumber [25],Brassica [26] and cassava [27]. In pepper some authors established that treatment with AgNO3 is necessary for shoot production and elongation and is most effective when present in the regeneration medium but not in the bud induction medium [10,20,28]. Silver nitrate is known as ethylene inhibitor. Ethylene is a factor suppresses callus differentiation and regeneration in some plant species [29]. It is supposed that AgNO3 did not inhibit ethylene production during in vitro culture,but protected plantlets from its effect through binding to ethylene receptors of Ag+ ions within the plants [30,31]. Joshi and Kothari [18] assumed that shoot bud induction in Capsicum did not relate to ethylene action/inhibition. They established the similar effect of Cu and Ag for shoot buds induction but the both have altogether opposite effect on ethylene. The high concentration of Ag+ ions lead to ethiolation,longer internodes,intense chlorosis of the leaves and less vigor probably due to the heavy metal toxicity of this ions [31,32]. The positive effect of AgNO3 on pepper regeneration was proved in our experimental work. The results show that concentration higher of 0.2 mgL-1 inhibits regeneration process. However ability for regeneration was genotype dependent. The highest number of in vitro plants was obtained from variety Maritsa.

In the literature there is not enough information about the influence of humic acid on organogenesis. The results of our previous studies in micropropagation of pepper showed that low concentrations of humic acids increased shoot-tip growth and formation of stronger leaves and roots [33]. The humic acid are assumed to induce membrane permeability by interacting with phospholipids structures of the cell membranes and reacting as a carrier of nutrients through the membranes. The presence of amino acids in the humic acid structures offers the possibility of using these substances as a source of organic nitrogen.

These two facts may be considered beneficial for stimulating regeneration [34]. The positive effect of humic acid on the regeneration activity that we observed in pepper hypocotyls probably due to their ability to combine and inactivate toxic elements released from tissues.

The process of morphogenesis under in vitro conditions is determined also by appropriate choice of the explant types. Some authors found that the cotyledons are the most responsive explants [35,36]. Christiansen and Rajam [37] and Venkataiah et al. [38] reported that leaf explants generated more shoots than hypocotyls or cotyledons. On the other hand Dabauza and Pena [39] and Valadez-Bustos et al. [10] established that the hypocotyl and embryo explants develop morphologically normal adventitious shoot buds,while cotyledons formed rosette shaped,non-elongating shoots. The results show that 7-9 days cotyledons are more responsive than hypocotyls in conditions of this study.

Differences observed in regeneration frequency in the both explant types may be due also to the influence of endogenous growth regulators,the position of explant in the plant,culture medium and the tissue they consist. According to Torelli et al. [40],the regeneration of tomato hypocotyls is position-dependent and associated with the movement and different concentration of hormones in the tissues.

Different factors affected in vitro organogenesis in pepper were studied. Variety Maritsa displayed the highest regeneration response with cotyledon explants on culture medium supplemented with 0.2 mgL-1 AgNO3. Differences were observed in the plant height,fruit weigh and pollen fertility of seed-derived and in vitro regenerated plants. These materials could be used as a source for further investigation and breeding of plants with valuable traits.

Each experiment with pepper regeneration is a contribution to the development of better methodology for obtaining of more plant-regenerants from valuable genotypes by understanding their specific requirements to in vitro conditions.

The authors acknowledge the provided equipment by EU-BALKANVEGETABLES project within FP7 (grant ÃÂ¢ÃâÃâ 205941).