Malaria has been a cause of enormous morbidity and mortality since the dawn of evolution. Control of malaria remains a farfetched dream despite numerous efforts and intervention strategies devised by research communities. Increasing drug resistance in the malarial parasite to conventional drugs has raised an alarm. This situation warrants the need for exploring novel drug targets. In this study, we report the structural modeling of an attractive drug target 2C-methyl-d-erythritol 2, 4- cyclodiphosphate (MECP) synthase. Threedimensional model of the enzyme was constructed using in-silico tools. The model was further evaluated for stereo-chemical quality. This model will provide an insight about the structure of MECP synthase and aid in rational drug design

Apicomplexa is a group of organisms characterized by the presence of four-membraned relict plastid [1],which is presumed to be acquired from eukaryotic red or green algae by secondary endosymbiosis during the course of evolution [1-7]. This fact has been established by identification of 35 KB extrachromosomal DNA in P. falciparum and about 551 nucleus-encoded apicoplast targeted (NEAT) proteins have been predicted [8],many of which are considered attractive drug targets [9]. This organelle is essential for survival of these parasites and houses many biochemical pathways like fatty acid,heme and isoprenoid biosynthesis [10]. These pathways are exclusively present in bacteria,plant and apicomplexan parasites but absent from human. This fact makes them attractive source of numerous drug targets [11-12]. Though isoprenoids may seem very diverse in structure and perform a variety of functions ranging from ETS,photosynthesis,signalling,control of biosynthesis of lipid,meiosis,apoptosis,protein degradation,the basis unit remains 5-carbon isoprene unit [13].

There are 2 distinct pathways to carry out isoprenoid biosynthesis [13],mevalonate pathway [14] and plastidial methylerythritol 4-phosphate (MEP) pathway/ Rohmer pathway [15-17]. The first pathway was presumed to be ubiquitous and the only route for synthesis of isoprenoid until recent discovery of mevalonate-independent MEP pathway in chloroplast of plants,eubacteria and apicomplexa. Plasmodium utilizes MEP pathway exclusively and this fact has been supported by studies involving inhibition of mevalonate pathway by mevastatin [18]. Several enzymes of this pathway have been identified including 1-deoxy-D-xylulose-5-phosphate synthase,1-deoxy-D-xylulose-5-phosphate reductoisomerase and 2C-methyl-D-erythritol 2,4- cyclodiphosphate synthase [13,19]. The increasing multi-drug resistance and spread of these Plasmodium strains are the cause of concern for public health authorities and failure of conventional drugs in controlling malaria has motivated researchers across the globe to explore new biochemical pathways in search of novel drug targets for developing efficient anti-malarials.

Owing to their absence in human hosts,this pathway represents an excellent source of novel drug targets and it is presumed that specific inhibitors designed against enzymes of this pathway will aid in designing new anti-infective agents,which will be less toxic and cause fewer side effects [20- 21]. MECPS,EC: 4.6.1.12) the fifth enzyme of MEP pathway catalyzes the formation of isopentenyl pyrophosphate (IPP) and dimethylallyl pyrophosphate [13] and represents a promising drug target for structure-based drug design. In the present study,we have attempted to construct the structure of MECP synthase using comparative modeling technique.

Retrieval of the sequence

Amino acid sequence of enzyme 2C-methyl-derythritol 2,4-cyclodiphosphate (MECP) synthase of Plasmodium falciparum 3D7 (Accession No: XP_001349603.1) was obtained from NCBI,a publicly available database. As experimentally determined structure of this enzyme is not available till date,we have attempted to determine its structure using in silico tools. Important properties of MECP synthase were calculated using PROTPARAM [22]. SOPMA [23] was employed to predict the secondary structure of the enzyme using 4 states prediction option and keeping a window width of 17 and similarity threshold of 8.

Amino acid sequence alignment of target and template proteins was derived using the ClustalX program [30] applying the default parameters. Target-template alignment is illustrated in Figure 2 . Default parameters were applied and the alignment was used as input for the modelling exercise.

MODELLER9v7 software [31],which exploits sequence alignment between the considered protein and its selected template,was used for determining tertiary model of the protein. This wellknown program performs a restraint based modelling,Complete assessment and evaluation of the generated models were performed followed by Ramachandran Plot analysis. Structure of the model was visualized using PYMOL [32] and VMD software [33].

Validation of the derived structure

For ascertaining the reliability of the obtained structure,model was subjected to evaluation of stereo-chemical quality using RAMPAGE [34].

Q-siteFinder [35] was employed for identification of binding sites in the derived structure.

Important physiochemical properties of the target protein were computed using Protparam tool [22] to gain an insight about the protein (Table 1). MECP synthase is a basic protein having 240 residues. Instability index of 37.39 indicates the stable nature of protein and a low GRAVY value reflects its hydrated state. 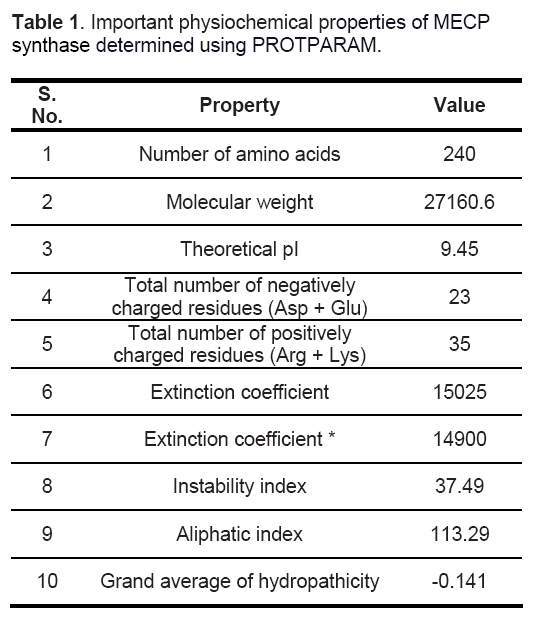 In wake of a huge gap in the available protein sequences and number of structures deposited in PDB,researchers across the globe have adopted homology-modelling technique as a valid substitute to experimental techniques for structure determination. Comparative modelling is based on the fact that if two proteins share a good sequence identity,they also share structural similarity. This methodology has been utilized extensively for generation of 3D structure of proteins in case of Plasmodium also,for example apical membrane antigen [36],heat shock protein [37],Dihydrofolate reductase [38] and Thioredoxin reductase [39]. 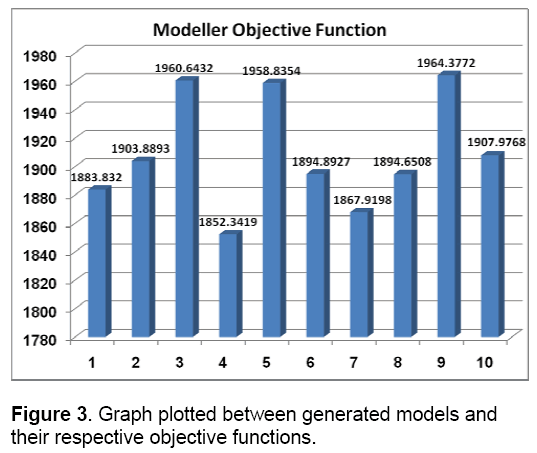 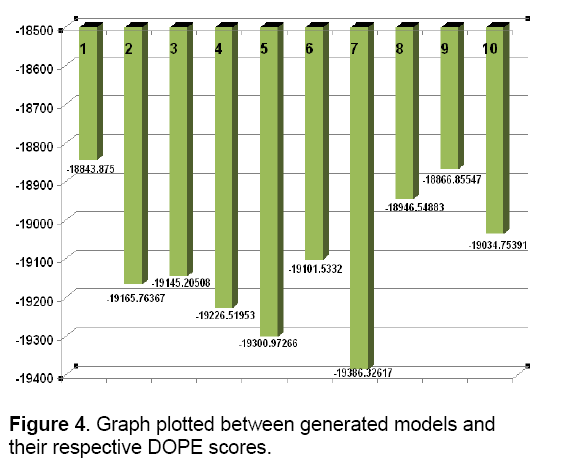 These models were assessed and evaluated using RAMPAGE server that considers dihedral angles ψ against φ of amino acid residues in protein structure. The model with no outliers showing 95% amino acids in favoured regions and 5% regions in allowed regions of Ramachandran plot was selected for further analysis (Figure 5 ). The structure has 3 large α helices and 4 large β sheets (Figure 6 A). Apart from these,it contains 4 small sheets. Out of four large β sheets,one pair is parallel whereas the other pair is anti -parallel in orientation. The large sheet in anti-parallel direction spanned from Ile 65 to Lys76 and the other ranged from Gly219 to Lys 238. The parallel sheets spanned from Aln174- Ile180 and Glu205-Thr214. Figure 6 B shows the surface representation of the model represented in default colours in Pymol. Figure 6: (a) 3D model of MECP synthase. (b) Surface representation of generated model by Pymol.

Root-mean-square deviation (RMSD) of 0.05 Å between the backbone atoms of the template and model indicated close homology. This ensures the reliability of the model. Superimposition between target and template structure is shown in Figure 7 . Figure 7: Superimposition of the target and template structure.

Failure to win the long ruthless battle against malaria is mainly attributed to resistance of vectors to insecticides,unhygienic conditions,lack of primary healthcare facilities,limited availability of cheap and effective drugs and above all,the evolution and spread of multi- drug resistant Plasmodium species. This situation has now underscored the need for search of novel drug targets. Often the enzymes critical for the survival of the parasites with no known homolog in the host species are considered as good drug targets as they bring down the risk factors of unwanted side effects elicited by drugs targeting these molecules. MEP pathway houses many good drug targets and among them,MECPS has been projected as one of the most promising and attractive drug target. Structure of this enzyme has been elucidated and explored for the possibility of anti-microbial drug development in other important parasites like Mycobacterium tuberculosis. Effective targeting of this enzyme by possible inhibitors (proved successful in similar pathogens) will pave a way for development of future anti-malarial therapeutics. In the present study,we have constructed a tertiary structure model of MECP synthase of Plasmodium falciparum 3D7. This model will provide an insight about its structure in absence of an experimentally derived crystal structure and will serve as a foundation for rational design of anti-malarial therapeutics.

Authors are thankful to the Director of I.I.C.T for his support and encouragement. AKB is thankful to C.S.I.R for Senior Research Fellowship. Authors thank anonymous reviewers for their valuable suggestions for improving the manuscript.