Leptospirosis is a worldwide zoonose and is endemic in many countries. This zoonosis is maintained in nature by chronic renal infection of carrier animals, being rodents and other small mammals the most important reservoirs. Also, significant sources of human infection are domestic animals, such as livestock and dogs. The wild boar (Sus scrofa) is an introduced species from Europe which is widespread in America and particularly in the Center and South of Argentina. This species is highly valued by hunters in the region and their meat is consumed more often. In many countries of the world (Europe, USA and Australia) studies of seroprevalence have been carried out, the seroreactivity does not mean that the wild boar has clinical symptoms of leptospirosis or that wild boars are maintenance host of this pathogen. However, these animals have been in contact to leptospiras in their environment in the past. This study has the objective of molecular characterization of pathogenic Leptospira sp. isolated strain obtained from fetuses of wild boars from Patagonia Argentina. Four fetuses were aborted from a wild boar (Sus scrofa) in Patagonia, the southern region of Argentina. Necropsy was performed of the 4 fetuses and samples of kidneys, liver, spleen and lung were cultivated in Fletcher and EMJH mediums. Also, samples of liver, spleen, lung and kidney of fetuses were processed and analyzed by direct immunofluorescence. Multiple Locus Variable number tandems repeats Analysis (MLVA) was used to characterize the isolated strain. The genetic profile of the isolated pathogenic Leptospira sp. strain was identical to the profile of Leptospira borgpetersenii serovar Castellonis Castellon 3. To the best of our knowledge this is the first isolation of Leptospira spp. from a wild boar fetus.

Leptospirosis is the most widespread zoonotic disease in the world. It is caused by pathogenic Leptospira spp. spirochetes, which find an ideal niche for transmission in subtropical and tropical regions. There are no available data on the incidence of leptospirosis in several countries, however in addition, the disease is frequently not recognized and, consequently, severely neglected [1]. Pathogenic Leptospira spp. strains mainly infect mammals, but they can also be found in reptiles and amphibians [2,3]. This zoonosis is maintained in nature by chronic renal infection of carrier animals, being rodents and other small mammals the most important reservoirs. In addition, significant sources of human infection are livestock and domestic animals, such as dogs. In Argentina this disease is endemic and no epidemiological control or prevention programs have been yet implemented. Until November 2016, an estimate of 3206 human cases was notified to the National Health Ministry of Argentina (National Health Ministry, 2016) [4].

Ellis [5] established domestic pigs as maintenance hosts for the serogroup Australis and in Jansen et al., for serogroup Pomona. On the other hand wild boars are categorized as accidental hosts for serovar Grippothyphosa in Treml et al. [6] and in Jansen et al. [7] for serogroup Pomona and Bratislava. In Slavica et al. [8] a serological study in wild boars in Croatia was carried out using MAT, in this study the most frequent serovars were Australis (33,3%), Pomona (21,8%) and Tarassovi (14,3%) from a total of 351 serum samples, the highest titre obtained was 1/3200 for serovar Pomona. In a recent serological study of wild boars (Sus scrofa) in Poland 3621 blood samples from wild boars were analyzed for following Leptospira spp. serovars/serogroup [9]: Icterohaemorrhagie, Grippothyphosa, Sejore, Tarassovi, Pomona, Canicola, Bratislava, Autumnalis, Hardjo and Ballum. The serogroup Ballum did not gave titers in the serum samples tested. Serovars Pomona and Sejore are reported as the most common in domestic pigs in Poland; however in Zmudzki et al. [9] these serovars were infrequent. In the same study, increase of free living wild boar population in Europe is mentioned in urban and suburban areas and the threat of possible dissemination of pathogenic Leptospiral strains is concerning. The necessity for population control also constitutes a risk for hunters to become infected by Leptospira spp. [10,11]. Also the geographic expansion of humans into not urbanized areas is causing that wildlife animals have to live closely with the inhabitants of these towns and cities. In 2006, a human case of leptospirosis in Berlin was linked to the possible infection by freshwater contaminated with wild boar urine [11]. In a review of wild boars as sources of infections in humans and livestock (Meng et al. [12]), only three studies are listed for positive seroreactivity: Germany (Jansen et al. [7]), California (USA) (Clark et al. [13]), and Italy (Ebani et al. [14]). Also in Oklahoma (USA) Saliki et al. [15] was also found seroreactivity in wild boars (Sus scrofa). In Jansen et al. [7] serum samples of wild boars of urban areas of Berlin were tested by MAT, serovar Pomona and Bratislava were the most frequent, these results and the demonstration that leptospires were found by silver staining in kidney samples of wild boars showed that these animals are maintenance hosts also in urban areas. In Slovenia Vengust et al. [16] in a seroprevalence study of Leptospira spp. in 437 wild boar serum samples, found that the prevalence of antibodies of this study was higher (45.5%) than the prevalence determinate in previous studies: Italy (6%; Ebani et al. [14]), Czech Republic (16.9%; Treml et al. [6]), Germany (24%; Schönberg et al. [17]), Poland (25.2%; Krawczyk [18]), Croatia (26%; Cvetnic et al. [19]), Austria (30%; Deutz et al. [20]) and Australia (20%; Mason et al. [21]).

In Brazil a serological screening using MAT was carried out in a captive population of wild boars for human consumption. In this study 63 animals were positive to Leptospira spp. the best represented serovars was: Hardjo, Copenhageni and Pomona [22].

To the best of our knowledge this is the first isolation of L. borgpetersenii from fetuses of wild boars (Sus scrofa).

Necropsy was performed of the 4 fetuses (Figure 1) using the protocol described by Faine et al. [23] and samples of the kidneys, liver, spleen and lung were cultivated in Fletcher and EMJH media. The cultures were incubated at 28°C until development was determinate, every 15 days the cultures were observed under dark field microscopy. 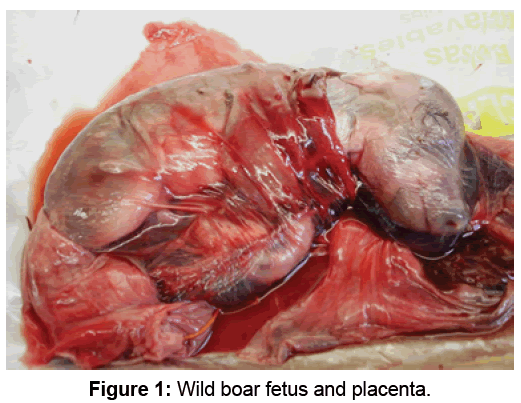 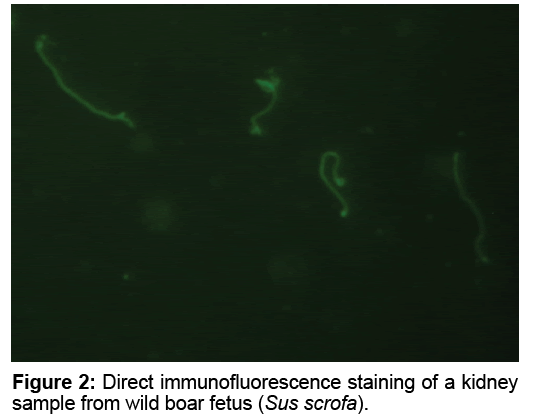 The reference strains and the strain isolated were grown in Fletcher media (Difco Laboratories) at 28ºC. For the DNA templates the protocol used with the resin Chelex-100 (Bio Rad) was used. Multiple-Locus Variable-number tandem repeats Analysis (MLVA) was used to characterize the isolated strain with 1 set of oligonucleotides specific for the pathogenic strains of L. interrogans, L. kirschneri and L. borgpetersenii, following loci were used, VNTRS: 4, 7, 10, Lb4 and Lb5 [24]. The final volume (50 μl) of each reaction mixture contained PCR Buffer (20 mMTris- HCL,pH 8.4;50 mM KCL), 200 μM deoxinucleoside triphosphates, 2 μM each corresponding primer, 2 mM MgCl2, 1.25 U Taq DNA polymerase (Invitrogen) and 5 μl DNA template. PCRs were carried out in a Thermo Scientific PxE 0,2 Thermal Cycler as follows: 94ºC for 5 min, followed by 35 cycles of denaturalization at 94ºC for 30 s, annealing at 55ºC for 30 s and extension at 72ºC for 90 s, with a final cycle at 72ºC during 10 min. Amplified samples (15 μl) were revealed by electrophoresis in a 2% agarose gel in buffer TAE (40 mM Tris-acetate, 1mM EDTA) with 0,2 ul μg/ml of ethidium bromide at 100 V for 50 min. Amplified DNA bands were visualized upon UV light exposure (Uvi Tec transiluminator BTS-20.M). Amplicon sizes were estimated using CienMarker (Biodynamics) and the GelAnalyzer 2010a program. To calculate the repeat copy number the following formula was used: Number of repeat (bp)=[Fragment size (bp)-Flanking regions (bp)]/Repeat size (bp). Repeat copy numbers were rounded down to the closest whole numbers. If the copy number was less than one it was rounded to zero.

Direct Immunofluorescence was positive in liver, spleen and kidney of fetuses. One Leptospira spp. strain was isolated from kidneys and liver in Fletcher medium after 47 days of incubation at 28ºC. The genotyping of the isolation is coincident with the genetic profile of Leptospira borgpetersenii serovar Castellonis Castellon 3 (-,-,1,4,6) of serogroup Ballum (Figure 3). 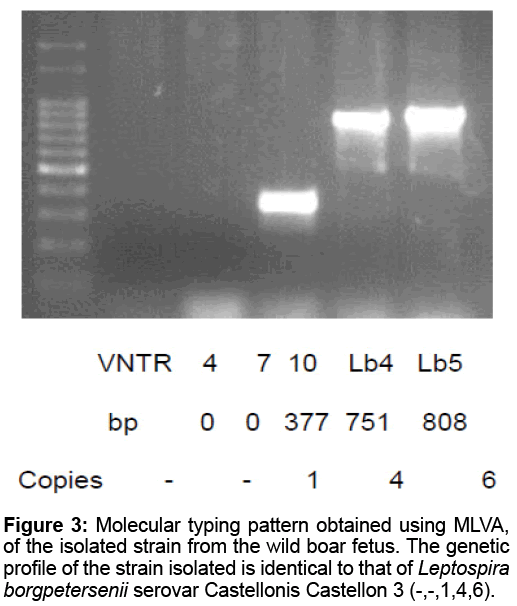 Figure 3: Molecular typing pattern obtained using MLVA, of the isolated strain from the wild boar fetus. The genetic profile of the strain isolated is identical to that of Leptospira borgpetersenii serovar Castellonis Castellon 3 (-,-,1,4,6).

To the best of our knowledge, this is the first isolated strain of Leptospira borgpetersenii isolated from wild boars in South America and the first isolated strain from aborted wild boar fetuses. This finding suggests that wild boars are susceptible to L. borgpetersenii serovar Castellonis Castellon 3 of serogroup Ballum. This genotype was previously characterized in mice populations in Argentina [25]. The same species L. borgpetersenii was isolated in water samples in an urban river in Argentina by Francoise et al. [26] and has been isolated in clinical cases of domestic animals by Grune et al. [27] and in humans by Goncalves et al. [28]. Rossetti et al. [29] isolated L. interrogans from domestic pigs in Argentina. This species has been isolated also from free-living opossums in Brazil [30]. Several serosurvey studies carried out in wild boars (Europe, USA and Australia) show the exposure in the environment and ecological niches where wild boar populations live, to pathogenic Leptospiral strains in their past, but in this study an isolated strain from an aborted fetus of Sus scrofa could be cultured and molecular characterized.

This research was financed by Proyecto Nacional INTA, AESA 202821. 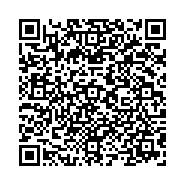