Considering the importance of nutritionally balanced and cost-effective alternative diets for fish,there is a need for research effort to evaluate the nutritive value of different animal and plant by-products as feed staff in fish diet to replace fishmeal,which is expensive and gradually becoming scarce [1,2]. Use of fish (offal) wastes as alternative feedstuffs in fish and other animal diets is gaining importance because it produces environmental benefits and reduces the cost of animal production [3,4]. Fish-offal (FO),particularly the viscera of carps,has immense potentiality to be used as fish feed. The viscera of carps,which are thrown in bulk as offal in the retail fish markets,contains high amounts of crude protein (30-32%) and lipid (15-18%) [5]. However,these materials are not evaluated for fish diet earlier. However,the FO needs to be processed suitably before using it in a diet formulation. Fermentation has been proved to be a most suitable technique to improve nutritional quality of animal by-products and to make them suitable for inclusion in fish diet formulation [2,6-8]. Fermented fish-offal has been proved to be a viable source of protein for the diet of carps [5]. The freshwater catfish H. fossilis has also been found to accept a diet containing fermented fish offal [9]. The influence of fish offal on fatty acid profile of fish is very scanty. The beneficial fatty acid in fish body is synthesis from the feed materials they consumed [10]. The beneficial effects of fish lipids on human health have already been well established [11]. It is currently well established that increased fish consumption in human is associated with decreased mortality,as well as morbidity from cardiovascular disease (CVD) and coronary heart disease (CHD) [12,13]. Consequently,the links between fish as food and human health are strongly related to the fatty acid composition of the food [14]. The fatty acid profile of fish can be modified with diets containing non-conventional sources [15]. It is therefore of utmost importance to determine the influences of feed on growth as well as fatty acid profile of fish [16]. The aim of this study is to evaluate the growth of O. niloticus by using fermented FOM and also to study the qualitative changes in fish flesh.

Fifteen fingerlings in triplicate groups used in two different treatments. Altogether ninety (90) Nile tilapia (male and female ratio 1:1) fingerlings were used in this experiment. The fish fingerlings were treated with potassium permanganate solution (1mg L–1) to remove any external parasites and were acclimatized in a big tank for five days. Experiments were carried out at the tanks of aquacultural engineering section of IIT-Kharagpur,Paschim Medinipur,West Bengal,India. Each group of fingerlings also were initially weighed to record the initial biomass. They were stocked in six rectangular cemented tanks (1000 L). The water system was static in nature and the bottom of the tank was filled with local agricultural soil (pH 6.4 ± 0.05). The experiment was conducted for 90 days from June to August in the year 2010.Dechlorinated well water (temperature 28 ± 3 °C,pH 7.0 ± 0.05,free CO2 0.4 ±0.01 mg L–1,available nitrogen0.5 ±0.05 mg L–1 and dissolved oxygen (DO) 6± 0.5 mg L–1)was used in the experiment

The principal feed ingredient (fish offal) was collected from local retailer fish market at very low cost. These substances were economically cheap but contained significant amount (36–40%) of crude protein [17]. Biochemical composition of fish offal used in the feed for tilapia is shown in Table 1. Diets used for growth trial were prepared that feed formulations remain almost isoproteinicious (30 g 100 g–1) and isoenergetic (4Kcal g–1) in nature. Diet formulations are presented in Table 2. Mustard oil cake,wheat flour,rice bran and egg shell dusts were used for making reference diet (RFM). In addition to these components fish offal is key ingredient in FOM diet. The proportion of different feed ingredients was determined by using Pearson’s square method for making diet isoproteinicious. The different ingredients were thoroughly mixed using a food mixer (A200 Hobart Ltd).The mixture was given the shape of pellets using a Pellet Mill (Model CL2) with a 12 mm die. The resulting pellets were dried in a hot air oven for 48 h at 50ºC,packed in polythene bags and kept in dry and cool place. 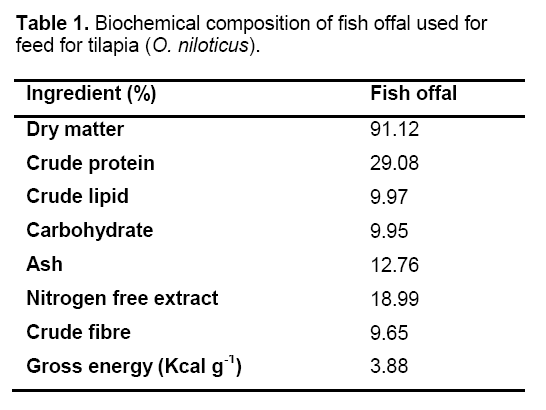 Feeds and carcass samples were analyzed following standard procedures of AOAC [19] Dry matter(DM) after drying in a hot air oven (Gallenkamp,UK) at 105°C for 24 h; crude protein (CP) by Kjeldahl method (N × 6.25) after acid hydrolysis,crude lipid (CL) after extraction with petroleum ether for 7-8 h by Soxhlet method (40–60°C boiling range),total ash by igniting at550°C for 3 h in muffle furnace (Size 2,Gallenkamp,UK). Organic matter (OM) was calculated by subtracting total ash from DM [20]. Crude fibre was determined using a moisture free defatted sample which was digested by a weak acid HCl (0.1N) followed by a weak base NaOH (0.1N) using the Fibertec System 2021 (FOSS,Denmark). Nitrogen-free extract was determined by subtracting the sum of crude protein,crude lipid,crude fibre and ash from DM [21]. Gross energy was determined using a Bomb Calorimeter Model-DFU 24 following the process as described below. The sample was combusted in a chamber pressurized with pure oxygen and resulting heat measured by increase in the temperature of the water surrounding the bomb.

Total lipid of various (fish flesh-2,feed-2) samples was dissolved in anhydrous methanol containing concentrated Sulfuric acid (1.0%,v/v) and the mixture was refluxed [23] for 2 hours. Methanol was evaporated to a small volume (1-3 ml) and cooled to 4°C,in a freezer. Distilled water 10–15 ml was added to the cooled mixture (1-3 ml) in hard glass test tubes by Pyrex and the methyl esters of fatty acids were extracted 3 times with aliquots (5-10 ml) of diethyl ether,vortexed in a Vortex mixer. The ethereal extracts were taken out by Pasteur pipettes,pooled and dried over anhydrous sodium sulphate,(1-2 gm) in conical flasks (25-50 ml capacity) with glass stopper,filtered through Whatman no. 1 filter paper,vacuum dried,redissolved in n-hexane ( 1-2 ml volume) and kept in a freezer at 4°C for future use.

GLC of FAME was done on a BPX-70 megabore capillary column of 30 mt length and 0.53 mm i.d. obtained from SGE,Australia. Oven temperature was programmed from 150°C – 240°C with a rate of 8°C/min. Initial and final temperatures were kept isothermal for 1 minute and 20minutesrespectively. Injection port and detector temperatures were 250°C and 300°Crespectively.Nitrogen gas was used as carrier gas and its flow rate was 6.18ml/min.

Data are presented as means ± SD. One-way ANOVA was used to determine the significant effects of different types of feed on growth and growth parameters and also on fatty acid profile of fish flesh. The differences between the means of treatments were examined using Duncan’s multiple range tests [26].

The highest weight gain (89.67 g) was observed in the FOM applied feed. The growth rate always faster in FOM fed fish than fish fed with RFM (Figure 1). This indicates that fish can consume the FOM feed well. This was possibly due to their higher palatability and preference of the fish to take it as their potential food. Sammader et al. [27] reported that M. vittatus grows better on diets supplemented by fermented mixture containing FOM as compared to the fish fed the reference diet without FOM. 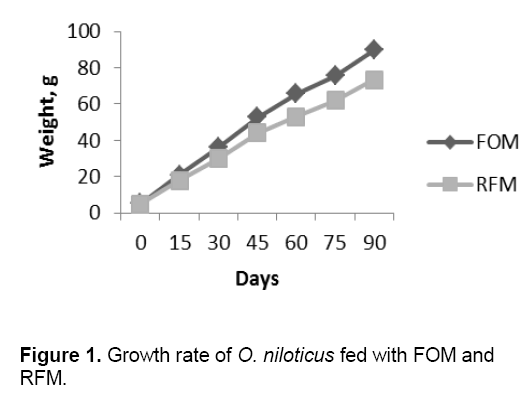 But the amount of feed intake was highest (2.21g) in RFM.The feed conversion ratio (FCR) was differed significantly and lowest value (2.30) was recorded from ETM fed fish indicating an encouraging effect on economic involvement in fish farming. 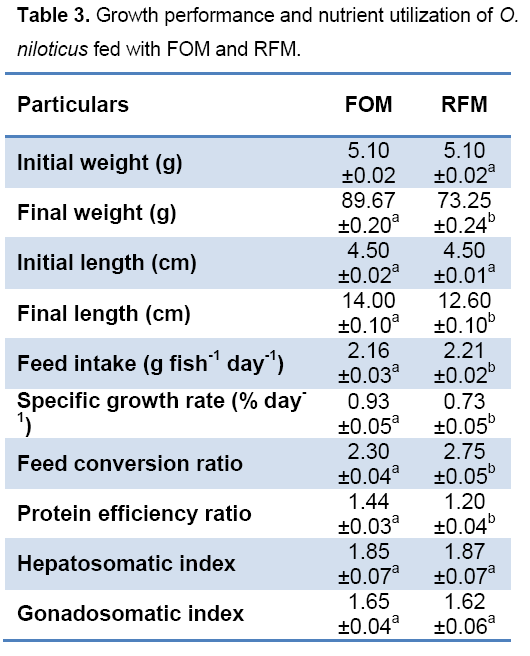 Only 14 fatty acids are really needed to describe the fatty acids of fish [28]. However,Ackman et al [29] listed 64 fatty acids from 5 fresh water fishes of West Bengal,India. The fish under discussion recorded 28 fatty acids of the total lipid (TL) and the result is more or less similar to those reported from other tropical and certain temperate zone fresh water fishes. The dominant fatty acids in lipids of all the fishes were myristic (14:0),palmitic (16:0),stearic (18:0),palmitoleic (16:1ω7),oleic (18:1ω9),linoleic (18:2ω6),linolenic (18:3ω3),arachidonic (20:4ω6),eicosapentaenoic (20:5ω3) and docosahexaenoic (22:6ω3) acids [28]. The present results corroborate with the above findings. The total SFA of the experimental fish was nearly double than the amount reported by Ackman et al [29].

Fatty acid deficiency in fish species is indicated by the presence of eicosatrienoic acid (20:3n-9) [30].Thus,the absence of eicosatrienoic acid in these fish indicates that these fish are not suffering from any fatty acid deficiency. This observation corroborates with the findings of Nematipour and Gatlin [30]for hybrid striped bass in the USA [31].

The n-3 PUFA is the chief group of components through which the beneficial effects of fish are mediated. The principal effects of n-3 PUFA are antithrombogenic and antiarrhythmic,whereas that of n-6 PUFA is antiatherogenic [32,33].The n3/n6 ratio should range 1–2 for fresh water fish [29]. The n3/n6 ratio of the experimental fish was within the same range.

The fish fed with ETM accumulates more n-3 fatty acids than n-6 fatty acids which increase n-3/n-6 ratio (1.84) in return. The feed prepared from earthworm enhance growth and thereby yield of Oreochromis niloticus. It improves quality of fish by accumulating more n-3 PUFA in the flesh of the fish as well as increasing the n3/n6 ratio which is beneficial for human health. Moreover,the feed can be formulated at local level leading to employment generation in rural areas

The authors are grateful to Kamalesh Kumar Misra,Ex. Professor,Culcutta University,India,for providing his valuable support in preparing this manuscript.