St. John’s wort (Hypericum perforatum L.) belongs the family Hypericaceae, is one of important medicinal plants in the world. This herb has used in traditional folk medicine for the treatment of various ailments. Jasmonic acid (JA) and its methyl ester, methyl jasmonate (MJ), is regarded as endogenous regulator that plays important roles in regulating stress responses, plant growth and development. A pot experiment was conducted to assess the effect of foliar application of JA on herbage yield, and hypercin content in the tetra-hydrofuran extract from the aerial parts of H. perforatum. Experimental treatments included (I) water foliar application (control), (II) water + acetone foliar application (as a solvent), (III-VI) 50, 100, 200, and 400 μL/L JA. Statistical analysis indicated that there were no significant differences among treatments for total dry matter. The results indicted the different levels of the foliar application of JA do have highly significant impacts on hypericin content. The highest amount of hypericin obtained from foliar application 200 μL/L JA with 0.8% (w/w) hypericin/extract in both harvesting times (before and after the flowering stages). Finally, foliar application JA could be used as a source for rapid and increased production of hypericin, as an important secondary metabolite in H. perforatum with a wide range of biologically active.

St. John’s wort (Hypericum perforatum L.) belongs to the family Hypericaeae,is a medicinal herb that has for centuries been utilized in folk medicine for a range of purposes [1]. This herb is under intensive investigation for its wound-healing,antidepressant,diuretic,sedative,anti-inflammatory,antiviral,antibacterial,and antitumor effects and it has been used to treat neurological disorders and traumas [2-4]. H. perforatum contains a wide range of biologically active secondary metabolites that belong to different chemical groups. Naphthodianthrones (hypericins),phloroglucinols (hyperforins),xanthones,essential oil,phenolic acid,and flavonoids (flavonols,biflavones and procyanidins) have been identified in extracts of the plant [5,6]. Several pharmacological studies have confirmed that these compounds are the main contributors to the antidepressant activity of the species through various mechanisms of action [7]. The presence of red-pigmented naphthodianthrone derivatives is characteristic to several species of the genus Hypericum [8,9]. The naphthodianthrones detected in H. perforatum,include hypericin and its 2-methoxy derivative pseudohypericin as well as their precursor’s protohypericin and protopseudohypericin. Hypericins are most abundantly present in petals,stamens of flowers,and leaves of H. perforatum [10]. Hypericins accumulate in the dark glands of H. perforatum [11]. The levels of hypericin and pseudohypericin in the Hypericum species can vary under different environmental parameters,but the precise environmental factors influencing the biosynthesis of naphtodianthrones and the partitioning with other secondary metabolisms are not well understood. It has been reported that naphtodianthrone production can be influenced by plant and environmental factors,including light intensity,nitrogen availability,temperature,seasons,and growing region. For example,an increased light intensity and decreased nitrogen supply resulted in a parallel increase of the number of leaf dark glands and hypericin content [12].

(-)-Jasmonic acid [(3 R,7 R,9Z)-jasmonic acid; (-)-(JA)] (Figure 1) and its methyl ester were first identified in the essential oils of jasmine (Jasminum grandiflorum L.),and rosemary (Rosmarinus officinalis L.) and their chemical structures were subsequently determined [13,14]. JA and its volatile methyl ester,MJ,collectively termed Jasmonates,are regarded as endogenous regulators that play important roles in regulating stress responses,plant growth and development [15]. Jasmonates are involved in many critical functions,including defense against insects and pathogens by inducing phytoalexin production,protection from abiotic stresses,immunity,and plant growth and development,suggesting that they have critical roles in plant physiology [16]. 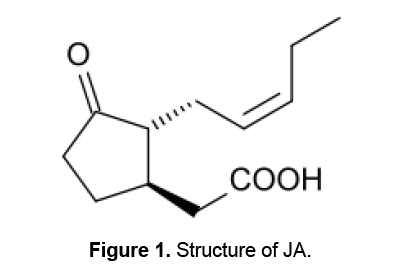 Few studies have been carried out to investigate the effect of foliar application of JA and/or MJ on the accumulation of secondary metabolites in medical plants,especially the Hypericum species. Therefore,the current study was done to find out the convenient rate of JA foliar application for optimum quality of H. perforatum..

H. perforatum seeds collected from the Bakhtiari Zagros Mountains (latitude. 31° 20ʹ to 31° 50ʹ; longitude. 50° 50ʹ to 51° 05ʹ; 2700 to 3000 m above sea level),Chaharmahal va Bakhtiari province,Iran. Plant identity was confirmed by H.A. Shirmardi,and voucher specimen has been placed in the Herbarium of Research Center of Agriculture and Natural Resources,Chaharmahal va Bakhtiari,Iran (No. 1335). In spring 2011 in plastic greenhouse conditions,25 seeds (0.001 g) of H. perforatum were sown in each plastic pot and after six weeks were thinned to four healthy seedlings per pot. The pots transferred to the filed in Shahrekord (latitude 32° 20´ N,longitude 50° 51´ E,altitude 2061 m above sea level),southwestern Iran on May 2011. Plastic white pots with a top diameter of 20 cm and a depth of 25 cm were filled with clay loam soil. Type of study area climate by Emberger’s climatology method is cold and semiarid (annual precipitation = 340 mm and average annual temperature = 12.2 °C). In this study,no inorganic fertilizer and systemic pesticide was used during the entire experiment,and weed control was done manually. For the first month (established phase),a watering level equivalent to 60-75% of soil field capacity was applied once a day. For the subsequent months,the plots were irrigated when 55-60% of soil available water was depleted.

Air-dried and powdered the aerial parts of H. perforatum were macerated at room temperature with 500 ml of ethanol: water (80:20) for 48 h. The extractions continued two times and then were concentrated in a rotary evaporator under reduced pressure (Model Zirbus 302®,Italy). The extract samples were stored in universal bottles and refrigerated at 4 °C prior to use.

2.5 Extraction and quantification of hypericin

where,A= absorbance at 590 nm; m= mass of the drug to be examined in plant extract,in grams.

3.1 Effect of Light Variation on Leaf Growth of Lettuce

Statistical analysis indicated that there were no significant differences among treatments for dry matter,number of branches,and plant height of H. perforatum (Table 1). Generally,results of this study indicated that the foliar application of JA no significant influenced on growth and development of H. perforatum. Similarly,other researcher [18,19] also reported the foliar application of JA had no significant effect on herbage dry weight of Thymus daenensis Celak,and Salvia officinalis L. under greenhouse conditions. Result of statistical analysis indicated that different levels of the foliar application of JA had significant impacts on hypericin content in the extract of H. perforatum harvested before and 50% flowering stages (Figure 2 and Figure 3 ). The highest hypericin contents in the tetrahydrofuran extracts of the aerial parts of H. perforatum was obtained from the foliar application of 200 μL/L JA with 0.8% (w/w) hypericin/extract in both harvesting times (before and 50% flowering stages) (Figure 2 and Figure 3 ). Previous studies indicated that the foliar application of JA was increased some monoterpenes compounds (carvacrol,thymol,and α-pinene) in the essential oils of Salvia officinalis [19],and T. daenensis [18]. The JA signaling pathway is generally regarded as an integral signal for biosynthesis of many plant secondary products [20]. Increasing evidence indicates that JA-induced changes in secondary metabolism constitute a ubiquitous plant defense response [20,21]. Cell cultures of H. perforatum treated with JA and incubated in the dark showed increased growth and hypericin production as compared with the cultures grown under light conditions [22]. JA and its derivatives are known to stimulate production of some secondary metabolites in medicinal and aromatic plants [23]. It is interesting to note the production of hypericin,a light-mediated insecticide [24],is stimulated upon JA treatment,since JA is known to be a key signaling compound activated upon insect feeding [25]. JA has also been implicated as the signal molecule responsible for increased synthesis of nicotine,an insecticidal compound produced by Nicotiana sylvestris upon leaf wounding [26]. Figure 2: Hypericin content in the extract from the aerial parts of H. perforatum harvested at before the flowering stage under JA foliar application (p ≤ 0.01). Means with common letters are not significant (p  0.05), according to Duncan’s multiple range test. Figure 3: Hypericin content in the extract from the aerial parts of H. perforatum harvested at 50% flowering stage under treatments foliar application (p ≤ 0.01). Means with common letters are not significant (p  0.05), according to Duncan’s multiple range test.

The authors gratefully acknowledge Shahrekord Branch Branch,I.A.U.,Iran for financial support of this research.