Numerous physiological and biochemical processes in the human body may produce oxygen-centered free radicals and other reactive oxygen species as byproducts which are known to be carcinogenic [1]. Medicinal plants can contain a wide variety of free radical scavenging molecules,including phenolic compounds,terpenoids etc.,which are rich in antioxidant activity [2-4]. Phenolic compounds are an integral part of the human diet and could be helpful against cancers,arteriosclerosis,ischemia,and inflammatory disease,which are caused by exposure to oxidative stress [5].

Around 430 species are spread throughout the northern temperate regions of the globe. Almost Amygdalus species are species of tree native to the Middle East and South Asia. Many members of the genus are widely cultivated for fruit and ornament. In Iranian folk medicine,the leaves of sweet and bitter almond (A. communis) used as remedy burn wound [6].

The leaves of five cultivars of A. Communis (Figure 1),including Rabi,Talkh (Better),Shahrood,Sephid,and Mamaei,A. lycioides (Figure 2 ),A. arabica (Figure 3 ),A. haussknechtii (Figure 4 ) and A. orientalis (Figure 5 ) were collected from Chaharmahal va Bakhtiari province,southwestern Iran (latitude 31° to 32° N; longitude 50° to 51° E; altitude 1500 to 2100 m above sea level) on June 2012. Identifications were consequently confirmed with the help of the authentic specimens deposited at the Herbarium,Research Center for Agriculture & Natural Resource,Chaharmahal va Bakhtiari province,Shahrekord,Iran. 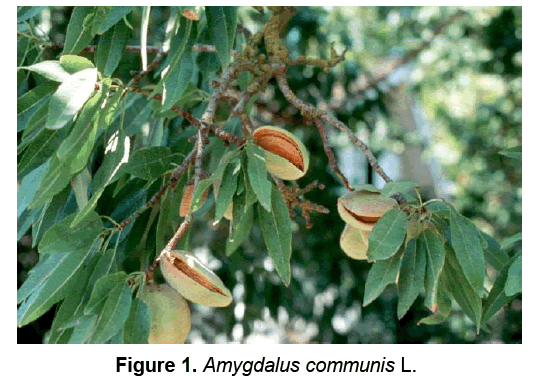 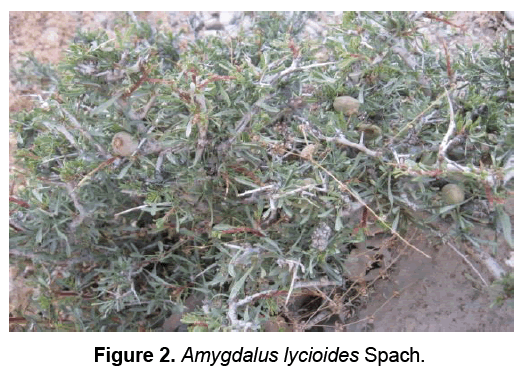 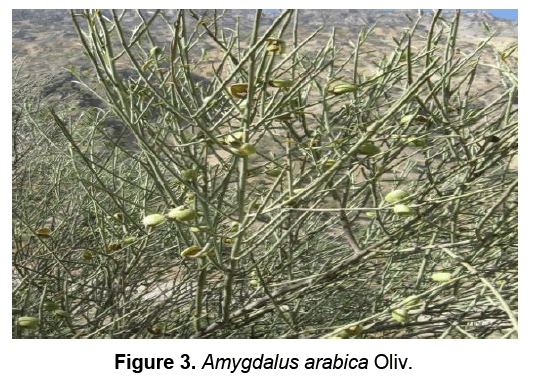 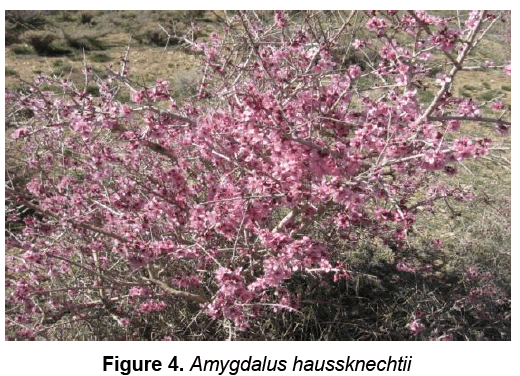 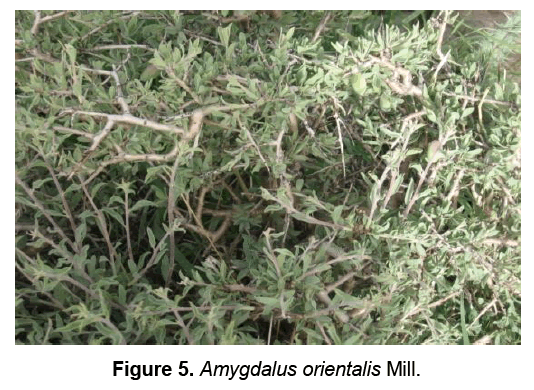 The leaves of the plants were shade dried and ground into a powder (100 g),macerated in 200 ml of ethanol 70% and filtered and then were dried at 35 °C under rotary vacuum (Model Zirbus 302w,Italy). The extract samples were stored in universal bottles and refrigerated at 4 °C prior to use.

The total phenolic content in each extract was determined using the Folin–Ciocalteu method following procedure of Singleton and Rossi [7] with some modifications. Briefly,0.5 ml of the sample were mixed with 2.5 ml of Folin-Ciocalteu’s phenol reagent and kept for 5 min at 37 °C. Then 2 ml of saturated Na2CO3 (7.5%) was added,and the mixture was brought to 10 ml with the addition of deionized-distilled water. The mixture was maintained at room temperature in the dark for 120 min and then the absorbance of the mixture was measured at 765 nm against a reagent blank using a UV–Vis spectrophotometer (PerkinElmer,USA). Gallic acid equivalent (GAE) was used as the reference standard and the total phenolic content was expressed as mg of GAE equivalents per gram of each extract on dry basis.

The DPPH radical scavenging activity of extracts was determined using the method proposed by Brand-Williams et al. [8]. Samples of selected concentrations of the plant extracts were mixed with an equal volume of 0.2 mM methanol solution of DPPH. The disappearance of DPPH was monitored spectrophotometrically at 517 nm beginning immediately after mixing,and after incubating for 30 min at room temperature. The absorbance of the DPPH radical without antioxidant against a control was measured daily. The amount of the sample necessary to decrease the absorbance of DPPH by 50% (IC50) was calculated graphically. The percentage inhibition was calculated according to Eq. 1.

The data were statistically analyzed in one-way ANOVA using the program SPSS (19.0). Means of the total phenolic content and IC50 of various extracts for different antioxidant assays were compared with Duncan test at p ≤ 0.05 level. The Pearson correlation coefficient (r) was used to show correlation and their significance by using SPSS.

Results of this study indicated a significant difference (p ≤ 0.05) for total phenolic content between the hydro-alcoholic extracts from the leaves of A. haussknechtii,A. arabica,A. orientalis and A. lycioides,and five cultivars of A. communis was found (Figure 6 ). 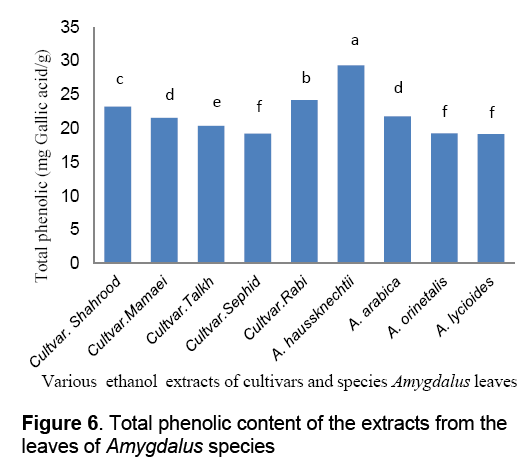 Figure 6: Total phenolic content of the extracts from the leaves of Amygdalus species 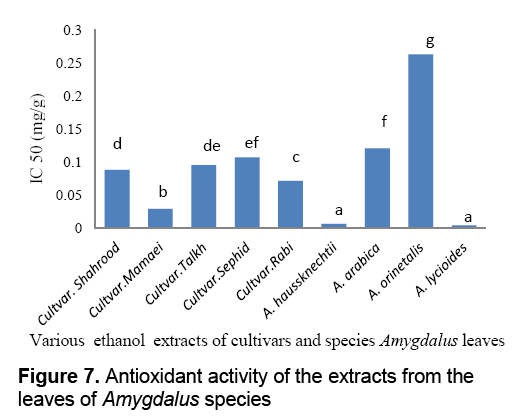 Figure 7: Antioxidant activity of the extracts from the leaves of Amygdalus species

Phenolic compounds are commonly found in both edible and inedible plants,and they have been reported to have multiple biological effects,including antioxidant activity. Total phenolic content in each was determined spectrometrically according to the Folin–Ciocalteu method and calculated as gallic acid equivalents (GAE). In this study,the highest total phenolic content was obtained for the extract of A. haussknechtii (30.00 ± 0.99 mg GAE/g dry weight extract) followed by A. communis cultivar Rabi (24.16 ± 0.72 mg GAE/g dry weight extract) (Figure. 7). In a study by Sang et al. [9] nine phenolic compounds isolated from the ethyl acetate and nbutanol fractions of almond (Prunus amygdalus) skins. Jahanban Sfahlan et al. [10] reported the significant differences were found in phenolic content of hulls and shells among various genotypes of A. communis,radical scavenging capacity percentage varied significantly among genotypes and their hulls and shells. In addition,they reported S3-7 genotype with the highest phenolic content and antioxidant activity in its hulls represents a valuable genotype for procuring antioxidant phenolic compounds.

The DPPH* is a stable free radical,which has been widely accepted as a tool for estimating the free radical scavenging activities of antioxidants [11]. Results of this study indicated the hydroalcholic extract from the leaves of A. haussknechtii,and A. lycioides had the highest antioxidant activity. Similarly,Sang et al. [9] reported that consumption of almond skins would be a good source of dietary antioxidants. Results of studies [10,12,13] indicated the extracts of whole almond seed,brown skin,and green shell cover possess potent free radical scavenging capacities. These activities may be related to the presence of flavonoids and other phenolic compounds in nuts.

Several investigations [14,15,16,17,18] have studied correlations between bioactive compounds and antioxidant activity by DPHH assay in numerous herbs and spices. It is well known that the phenolic compounds of the extracts from the leaves of Amygdalus species have the ability to scavenge free radicals,and that the factors such as genetic and environmental conditions (growth season and plant maturity) can cause variations in their values [19].

In conclusion,to the best of our knowledge this is the first report of quantitative phenols analysis for Amygdalus species,including A. haussknechtii,A. arabica,A. orientalis and A. lycioides,and five cultivars of A. communis. Our study results demonstrated the wide range of antioxidant activities of the tested plant extracts. The extract of E. platyloba showed the highest antioxidant activity by DPPH assay,contained the highest concentration of total phenol. In addition,results of our study indicated the effectiveness of these plant materials in preserving the food,while lacking the harmful side effects of synthetic antioxidants. These plants can also be served as a valuable source of natural antioxidants for further isolation and purification. However,further toxicological studies should be carried out to ensure their safety in vitro and in vivo.