Analysis of Yield and Some Important Agronomic Traits of Iranian Triticale Genotypes in Farmer Conditions.

In this experiment seven promising lines of triticale (includes ET-85-4, ET-85-14, ET-85-15, ET-85-17, ET-84-17, ET-82-15 and ET-83-18) that showed their superiority during the past different experiment in Seed and Plant Improvement Institute, Karaj, Iran, were compared with Juanillo-92 as control in a randomized complete block design with three replications and two locations in South Khorasan province. Characteristics such as the number of days to heading, days to maturity, spike length, plant height, 1000-seed weight, peduncle length and grain yield were measured. Analysis of variance was conducted and compare with Duncan's test. The results showed that the genotype had a significant effect on the number of days to heading (1%), the number of days to maturity and spike length (5%) but no significant effect on other traits. ET-82-15 and ET-85-17, respectively, with means 12.48 and 12.43 cm had a highest spike length and ET-85- 14 had the lowest (11.30 cm). Although we had no significant differences in grain yield, but ET-83-18 had the highest yield with 6.29 tons/ha, which is 6.04 percent over its Juanillo-92 (5.91 tons/ha). ET-85-15 had lowest yield with 5.76 tons/ha. So that ET-83-18 is recommended in Birjand and similar areas and can be replaced by the Juanillo-92.

Triticale (X Triticosecale Wittmack) was a new successful species that derived from hybridization of wheat (Triticum spp.) and rye (Secale spp.) [1-6]. The word "tiriticale" is a fusion of the latin words Triticum (or wheat) and Secale (rye). Triticale improved so rapidly due to breeding program that survival has been established as a new paradigm in several countries. Triticale seems to be an interesting alternative to other cereals, particularly bread wheat, in environments where growing conditions are unfavorable or in lowinput systems [1-8]. Where wheat production are limits for plant diseases or unsuitable soil conditions, triticale resurrected much attention as a dual-purpose plant due to the combination of protein and amino acids (especially lysine and dry matter production) compared to other grazing grain [9-18]. Cultivation of triticale was the lowest in the United States, Soviet Union and Canada for cold weather, but in the bordering countries such as Mexico is a large scale [10]. The most extensive program of triticale already has been carried out since 1965 in CIMMYT and the major achievements of this is separating the lines in order day insensitive that named Armadilo [17]. The armadilo is very fertile. It seems derived from crosses between a Mexican dwarf wheat (2n=6x) and triticale (2n=6x). In fact, armadilo is the first secondary hexaploid triticale. In Romania, new triticale varieties have been created over the past decade are equal or superior to other crops for grain yield, forage and biomass production for human food, animal feed or industrial applications [13]. The production programs in Iran are predicted those approximately 500,000 tons in 2021 [4]. Therefore, it has been required developing consistent and high-yielding varieties with good quality of this product. Because of high yielding, resistance to septoria, yellow and brown rust and high content of lysine and phosphorus than wheat and rye and ability to digest than rye, breeding and agronomic research is very important [15,16]. Because of importance of a biotic stresses (salinity and drought) in Iran, this plant is the perfect product for optimal use of the land and provide forage requirement. Selection of prior lines of triticale with consistent of low yield and marginal and resistance to disease is the aims of the triticale culture development [5,12]. Grain yield is a quantitative and complex character that strongly affected by environment. Therefore, the aim of this study was to surveying the effect of different environments on grain yield and some important agronomic traits in seven promising lines of triticale using combined analysis of variance.

In this experiment, seven lines from preliminary experiments that proved its superiority was conducted with control (Juanillo-92) in a complete block design with three replications in two locations of Birjand (Amirabad and Giv-Mokhtaran). Pedigree of genotypes that used in this experiment is shown in Table 1. Each genotype was planted in 10 m with 12 lines at 24 m2 areas by planting 450 seeds/m2. Fertilizers was contained triple superphosphate (100 kg/ha) and urea (200 kg/ha in two division: in late March and late April) and potassium sulfate (170 kg/ ha). Irrigation was favorable. The texture of soil is silty-loam and rainfall was 65 mm.

Table 1. Pedigree of promising lines and triticale cultivars contributed in this experiment.

Three sets of traits such as agronomical, physiological and yield trait were investigated in this study. Two physiological characters such as number of days to heading, days to maturity was measured from first day of sowing to appearance of inflorescence and dough stage of grain, respectively. Investigated agronomic traits such as spike length, plant height, 1000-seed weight, peduncle length and grain yield were measured in the end of growing season before harvesting.

Variance analysis showed that location had significant effect on height and spike length (at 5%) and days to maturity and grain yield (at 1%), but had no significant effect on days to heading, peduncle length and 1000- grain weight (Table 6 and Figure 1). Fox et al. used combined analysis of variance for grain yield from seven genotypes of triticale in seven locations and reported that examination of variance components for grain yield showed that genotype x site interaction components were generally 3 to 4 times the size of the genotypic variance [3].

*  and ** significant at 5% and 1%, respectively and ns is notsignificant 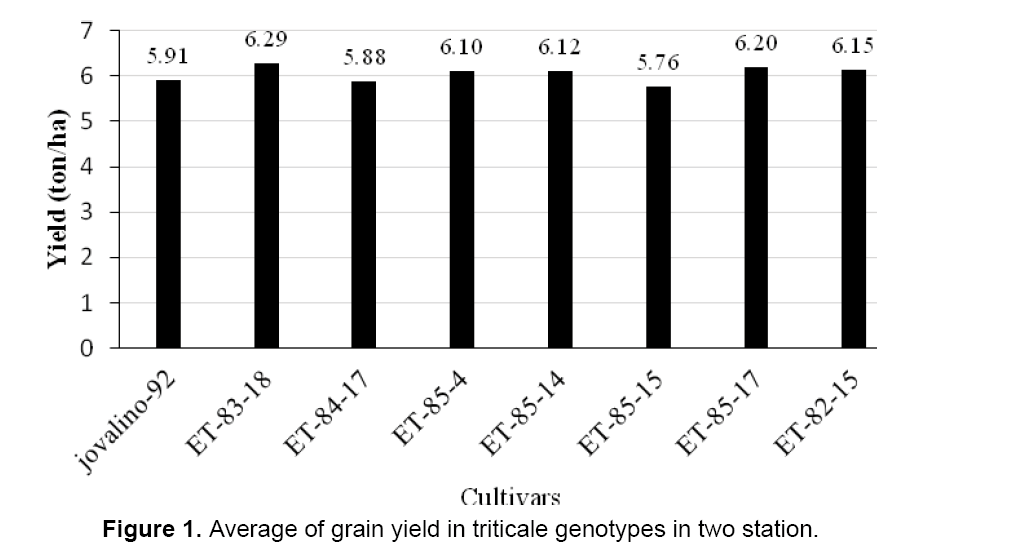 Mean comparison showed that the highest values of each traits such as plant height (94.08 cm), 1000-grain weight (34.16 gr) and grain yield (6.52 tons/ha) belong to Amirabad station (Table 7 and 8). Variance analysis showed that genotype had significant effect on days to heading (at 1%), days to physiological maturity and spike length (at 5%) but had no significant effect on other traits. location × line, was significant only for days to heading (at 5%) and spike length (at 1%) (Table 7). Fossati et al. report highly significant line × environment interactions for all investigated traits in winter triticale [2]. Kaltsikes also reported the occurrence of significant triticale cultivar × environment interactions in GY and found that the stability of yield performance was lower for a triticale cultivar than for hexaploid and tetraploid wheats [7]. Means comparisons showed that the highest days to maturity belong to ET-82-15, and in contrast, Juanillo-92 has the lowest days to heading and the minimum number of days to maturity between genotypes (Table 3). Days to heading and days to maturity are two important traits that have positive and significant correlation with grain yield in triticale [8]. Maximum spike length belongs to ET-82-15 and ET-85-17, with 12.48 and 12.43 cm, respectively. Also, minimum spike length belongs to ET-85-4 with 11.30 cm (Table 7). High ear fertility should be treated as an important trait in the breeding of small grain cereals, because of its positive influence over both yield potential and yield stability [11]. Notwithstanding not exist significant differences between genotypes, ET-83-18 with 6.29 tons/ha had a highest yield that had 6.04 % more than Juanillo-92 with 5.91 tons/ha. ET-85-15 was the lowest grain yield with 5.76 tons/ha (Table 7).

The results show that ET-83-18 was the highest yield with 6.29 tons/ha and 6.04 % more than control (Juanillo-92) with 5.91 tons/ha. The lowest of grain yield was 5.76 tons/ha belong to ET-85-15. So, we recommended ET-83-18 for planting in Birjand and similar areas and can be replaced by the Juanillo-92. According to result of this research we explain the effect of different environments on grain yield and some important agronomic traits of investigated triticale’s lines and also we show the better line of triticale for grain yield according to combined analysis of variance. Characters with high variances also highlighted high environmental variances which suggested that selection on the basis of phenotypic characters may not produce desirable result for which progeny selection may constitute desirable component for effective selection. These result can used in more precise analysis of genotype × environment such as AMMI, GGE bipolt and also yield stability analyses.

I would like to gratefully and sincerely thank Dr. Mohamadpour for his guidance and financial protection.