Conclusion: The bases of animal and human intestinal contaminations should be control to decrease the menace of E. coli in drinking water of Shahrekord.

In a day, milliards of people use from drinking water. The safety and health of drinking water are major concerns throughout the world. Health risks may arise from consumption of water contaminated with infectious agents, radiological hazards and toxic chemicals. It has been estimated that water-borne diseases were the causative agents of more than two million deaths and four billion cases of diarrhea annually [1]. In keeping with this, there are several reports concerning the contamination of drinking water with dangerous pathogens such as Escherichia coli [2].

Based on the uncertain epidemiological and microbiological aspects of the drinking water in the Shahrekord, Iran, the current examination was performed to study the incidence of STEC strains and their virulence factors in the eating water samples of Shahrekord, Iran.

Typical E. coli colonies were sub-cultured on nutrient agar broth (Merck, Germany) and then incubated 24 h at 37ºC. Then, Genomic DNA was extracted from the bacterial colonies using the DNA extraction and purification kit (Fermentas, Germany) according to the manufacture’s instruction. Concentration of extracted DNA samples have been determined by determining absorbance of DNA at 260 nm using spectrophotometer (SQ 2800, Unico, USA) [7]. Genomic DNA samples of each colony were further approved using 16S rRNA gene-based PCR amplification according to the method described by Woo et al. [8].

Set of primers and programs of PCR reactions applied for determination of virulence factors are shown in Table 1 [2-6]. Totally, 10 μl of PCR products were committed on a 2% agarose gel consisting of 0.5 mg/ml of CYBR Green (Fermentas, Germany) at 90 V for 20-30 min. Products were interpreted using ultraviolet illumination. E. coli ATCC 8739 and sterile distilled water were applied as positive and negative controls of PCR reactions.

Data recovered from all tests were subjected to SPSS/19.0 software and P<0.05 was determined a significance level. 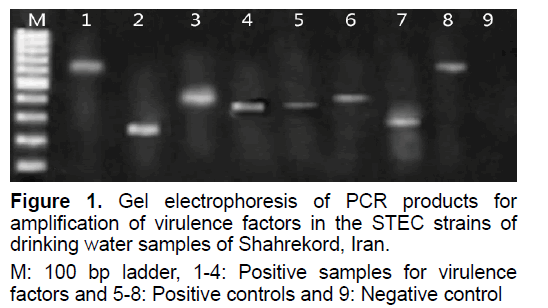 Figure 1. Gel electrophoresis of PCR products for amplification of virulence factors in the STEC strains of drinking water samples of Shahrekord, Iran.

Additional significant result of our examination is the considerable incidence of stx1, stx2, eaeA and ehly virulence markers in the E. coli strains of drinking water samples of Shahrekord. The most frequent virulence markers were stx1 and eaeA. In a study which was conducted on Egypt, the stx1 and eaeA genes were detected in the numerous samples of drinking water [18]. Ram et al. [19] reported the occurrence of different types of virulence markers of E. coli from water samples. Total prevalence of stx genes in the E. coli isolates of Dhaka city of Bangladesh was 60% [20]. In a study which was conducted on South Africa, the prevalence of eaeA and stx genes in the Plankenburg and Berg River systems were 15% and 0% and 8% and 15%, respectively [21]. Our results showed that all of the EHEC strains and majority of the AEEC strains harbored the stx1 and eae genes. Considerable incidence of these factors in the water samples of Shahrekord city exposed an imperative community health matter.

Our discoveries are in contract with a beforehand recorded results of expressively advanced occurrence of the eaeA gene (96%) in surface water [22,23]. EHEC strains causes HC and HUS in humans, and main virulence marker consist of eaeA and Shiga toxins genes. The moderately considerable incidence of the stx1 gene compared to stx2 in the E. coli isolates of drinking water recommends that E. coli strains which harbored mixture of the stx1 and eaeA genes is more routine than the mixture of eaeA and stx2 genes. Such of our E. coli isolates had all stx1, stx2 and eaeA genes which increased the importance of matter. The standing of these information lies on the point that eae-positive STEC strains are recognized more virulent for humans than eae-negative one [24]. It has been documented that combination of several virulence markers in such strains of E. coli may cause more sever diseases in humans [25,26].

In conclusion, we recognized a large proportion of E. coli bacteria with distinct pathotypes which derived mostly from bases of animal and human in drinking water samples of Shahrekord. We also recognized numerous E. coli strains positive for stx1 and eaeA genes. Concurrent attendance of stx1 and eaeA and stx2 and eaeA virulence markers in such E. coli strains specified the imperative community health concern regarding consumption of water. Application of bacteriological examination can diminish the bacterial load of drinking water. Monitoring of the bases of human and animal intestinal contamination, including management of municipal, industrial and agricultural wastewater is additional method to decrease the occurrence of E. coli in drinking water. It is essential to study the role of biofilms in survival of pathogenic bacteria in water pipes of Shahrekord.

This work was supported by the Islamic Azad University of Shahrekord (2015ef744).