Potential Food Waste and By-products of Coffee in Animal Feed

2. Preparation of silage and processing of coffee waste and by-products

The pulp from dry processing is fibrous and rather poor roughage: that from wet processing has a much higher feed value [2] but is high in moisture and does not store well. Ensiling with other feed resources appears to be the best method of preservation and improvement of the nutritive value of pulp.

Otherwise,two experiments were conducted with yearling rams to evaluate the nutritive value of coffee pulp ensiled on its own and ensiled in combination with either sugarcane stem,sugarcane top or elephant grass (Pennisetum purpureum) [3;4]. Good quality silage was produced from coffee pulp alone and in combination with the forages. Percentage composition of lignin,lignified protein and caffeine were highest in pure pulp silage and decreased,as a result of dilution by forages,in the others [2;3]. Silage process improved overall feed utilization comparing to fresh coffee pulp. However,better knowledge on modification occurring during silage process could allow finding the way to significantly improve nutritive value of coffee pulp by-products [5]. According to Bressani [6],fresh coffee pulp can be ensiled with 4-6% sugar cane molasses. Although it can be directly ensiled,better quality is obtained if moisture content is around 75%. A well-packed trench silo holds an average of 325 kg of coffee pulp per cubic meter. Other treatments include mixing with urea (10%),sodium metabisulphite (0.3-0.5%),calcium hydroxide (2%),and mixtures of inorganic acids (10% HCl + H2SO4). A different and attractive ensiling process is to mix grasses,sorghum or corn,with coffee pulp in layers of about 30 cm with or without sugar cane molasses (4-6%). The silage,whether of coffee pulp alone,or mixed with grasses,is ready to be used in about 3 weeks and if well packed,it can be preserved for up to 18 months. The silage from coffee pulp alone or mixed with other forages can be used as such,or it can be dehydrated (but this operation is not necessary) [6].

Moreau et al. [5] observed that silage process seemed to decrease parts of the anti nutritional effect observed with fresh coffee pulp. Coffee pulp ensilage is also a valid alternative to handling and storing the huge amounts of coffee pulp produced in the factories around the world which process coffee fruits. The inclusion of coffee pulp silage in the diets of some farm animals could contribute to lowering the meat and milk production costs,especially in developing countries [7].

Chemical compositions of coffee hulls,coffee pulp (dehydrated),coffee oil meal,and by product of essential oil extraction are showed in Tables 1,2,3 and 4. 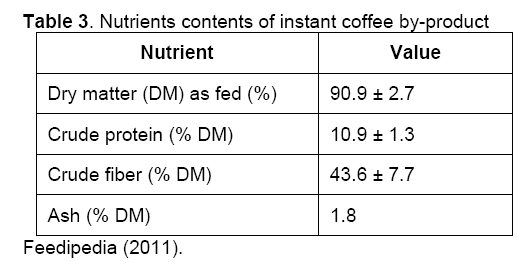 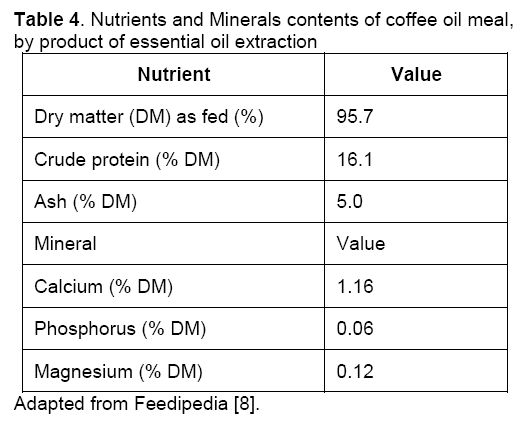 The nutritional value of waste and by-products of coffee has been studied by several researchers.In 1974,Catie has already said that coffee pulp has a promising role in livestock feeding if it can be efficiently and economically dehydrated. Three years later,Cabezas et al. [9],cited by Cabezas et al. [10],incorporated 20%,40% or 60% of sun-dried coffee pulp in rations as (15% and protein) partial replacement of cottonseed meal and cottonseed hulls,enriched with a mixture of sugar cane molasses and minerals,and observed the intake and digestibility in calves. Protein was kept at 15%. Although the digestibility of the organic matter increased from 51.2% (0% coffee pulp) to 54% (60% coffee pulp) and the gross energy had not changed,the digestibility of protein decreased from 47% (0% coffee pulp) to 36.2% (60% coffee pulp). The authors suggested that the observed increase was a consequence of the reduction of the daily intake,since it dropped from 3.5 kg 100 kg-1 live weight to 2.1,as the coffee pulp increased from 0 to 60% in the diet. Ingestion of coffee pulp was estimated to be 1.3 kg 100 kg-1 live weight at the 60% coffee pulp level.

4.1 In ruminants: sheep and cattle

The first studies with ruminants showed that cattle accepts coffee pulp as food only when supplemented with highly palatable feeds,forage,and protein concentrate [10]. In the same year,some studies have been carried out on the use of coffee pulp as food for animal husbandry [10;11]. These studies were conducted in countries where coffee is processed mainly by the wet,method what explains the lack of information on coffee husk.

Ranging from 15% to 20% Coffee hulls have been reported to replace several feeds in sheep diets. It is suggested to supply it with a high energy fodder [11]. Recommended inclusion rates 5% dietary level when replacing respectively concentrate and berseem hay,or ground maize [13;14]. Coffee pulp is a waste material from the coffee industry. Rathinavelu and Graziosi [7] showed that it can replace up to 20% of commercial concentrates in dairy cattle feeding,with no adverse effects and a 30% cost savings.

Dried coffee pulp is accepted by pigs from 8 to 16% in the ration [15-16]. At certain growth stages,lower weight gain was attributed to phenolics in the coffee pulp,since a study with decaffeinated coffee pulp showed that its addition to the ration did not improve the performance of pigs in comparison to normal coffee pulp [17]. Cunningham [18] fed pigs with caffeine at the levels of 1.5 g kg-1 and observed that nitrogen retention increased 7.9%,although a lower ration intake was detected. Therefore,considering the levels of coffee pulp used by Jarquín et al. [15-16],it is probable that caffeine was not responsible for the diminished weight gain and feed conversion.

In 1985,a total of 40 Large White growing pigs were fed on diets containing either 0.5,10,15 or 20% dried coffee pulp [19]. After a 12-week feeding trial,during which both feed and water were available ad libitum,half of the pigs (males) on each treatment were slaughtered. Average daily feed intake and weight gain,feed conversion efficiency and the various carcass traits measured were not significantly influenced by the inclusion of up to 20% dried coffee pulp. In another study,Okai and Dabo [20] fed four groups of five pigs with rations containing 0,10,20,or 30% of dried coffee pulp over a period of 10 weeks. They conclude that the inclusion of these rations had no significant influence on the feed intake,growth rate and feed conversion efficiency.

Overall results from feeding studies with pigs indicated that corn can be substituted by dehydrated coffee pulp for up to 16% of the total ration,with no detrimental effect on weight gain or feed conversion. This means that at the end of the finishing period,each reared pig has left nearly 50 kg of corn available for human consumption or alternative uses (Rathinavelu and Graziosi,2005). The feeding trials included the determination of daily body weight gain,daily dry matter intake,and feed conversion efficiency. Pigs fed with rations containing up to 15% of coffee pulp ensiled with 5% molasses had equal or better total weight gain than those fed commercial concentrates [7]. In addition,Oliveira et al. [21] argue that feeding pigs with coffee by-products may be of interest as indicated in Table 5 summarizes the recommended levels of inclusion. 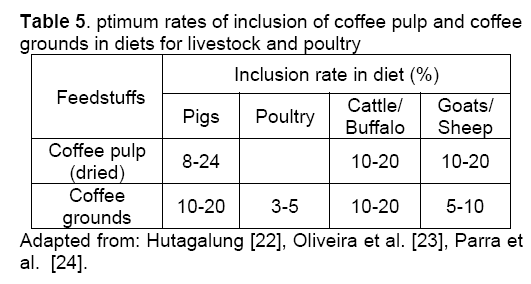 Besides pigs,coffee pulp feeding trials were carried out with fish and chicks.

Coffee pulp also did not affect the growth of the fish Tilapia aurea [25]. Compared to chicken manure,there was higher weight gain with a diet consisted of pellets containing 30% of coffee pulp plus wheat bran,ground corn,molasses,cottonseed oil meal,urea,and bone meal. Chicken manure was similar to a control diet that did not receive any additional supplementation.

The use of coffee pulp has been studied in tilapia (Oreochromis aureus). Its use is limited by the levels of tannins,caffeine and fiber. A dietary inclusion level of 13% coffee pulp in the diet did not affect growth and feed efficiency when compared with the control diet. Caffeine dietary levels between 2.4 g/kg to 4.6 g/kg tended to reduce fish growth,feed intake and nutrient digestibility in tilapia fingerlings. Bacterial inoculation was found to be a promising way to increase the nutritive value of coffee pulp for tilapias [26]. Dietary protein and energy utilization of diets containing fresh and ensiled coffee pulp were studied on 3.2 ± 0.2 g Nile tilapia for 28 days [5]. Fresh or ensiled coffee pulp should not be considered as suitable feedstuffs for Nile tilapia. Results showed that fresh or ensiled coffee pulp was not a suitable feedstuff for Nile tilapia [5].

In broilers,dried coffee pulp has a low nutritive value and the maximum recommended level is 2.5% [27].

5. Risks associated with the use of waste and by-products of coffee

Coffee pulp (dried or not),coffee hulls (sticky or dried) and coffee grounds (a by-product of instant coffee manufacture) have an overall deleterious effect on pigs [15;22;28;29;30]. The cherry and the leaves of coffee contain caffeine,an alkaloid that is a psychoactive stimulant drug,as well as tannins,polyphenols and high amounts of potassium [31]. The presence of these factors contributes to the antinutritional and antiphysiological activity of coffee by-products as observed in both monogastrics and ruminants,such as low palatability,feed intake,protein digestibility and nitrogen retention [1;32;34;34]. So limitations for the use coffee pulp in animal feeding are connected to its high contents on tannins and caffeine [35;36]. Pandey and Soccol [38] followed by Ramirez-Martinez [39] reported (dry matter basis) respectively 4.5% and 2 to 4% tannins in coffee pulp. Tannins are known to confer astringency to foodstuffs and complex proteins,affecting food digestibility and decreasing nitrogen utilization animals. Similarly,they are reported to damage protein digestibility as well as assimilation either through interaction of tannin with dietary protein or through inhibition of digestive proteases [39;40].

Although caffeine presents a somewhat bitter taste,thereby affecting palatability,the main limitations of this alkaloid for animal feeding are related to its physiological effects on the central nervous system [35]. Mazzafera [1] also believes that the presence of tannins and caffeine diminish acceptability and palatability of husk by animals [1]. According to Aregheore [41] supported by Rathinavelu and Graziosi [10] [7],the use of coffee pulp in animal feeding makes the food less palatable and interferes with nutrient availability and absorption in the gastrointestinal tract. Nitrogen availability is certainly affected by formation of protein complex by tannins.

On the one hand,caffeine causes embryonic mortality in hens at levels of 0.05 and 0.1%. Those fed with the highest level produced a 38.2% mortality rate [42]. On the other hand,dietary,coffee pulp severely decreased weight gain and caused 100% mortality in chicks [43],which received diets containing 50% coffee pulp for 6 weeks.

It should be noted that the ingestion of coffee pulp has no effect on blood biochemical parameters (glucose,protein,P,Ca,cholesterol) in pigs. However they had less back fat and higher liver weights [20].

6. Reduce levels of caffeine and tannin waste and by-products of coffee

It is possible to reduce the levels of caffeine and tannin waste and by-products of coffee to increase their use in animal feed. Physical (percolation),chemical (alcohol extraction) or microbiological (fermentation) methods may help reducing caffeine content and enhance animal performances [32;34;33]. Drying followed by several months of storage may reduce the amount of antinutritional factors [43]. Coffee pulp fermented with Aspergillus niger was used successfully at 10% dietary level [33].

Caffeine can be significantly reduced by microorganisms [1]. Several studies have shown that coffee fruits are a rich source of microorganisms. Boccas et al. [44] isolated 248 fungal cultures from coffee plants and soil collected from plantation areas. Roussos et al. [45] isolated 272 strains of filamentous fungi from soil,fruits and leaves using a culture media containing coffee extract,coffee extract plus sucrose,and coffee pulp extract. The fungi strains with the highest ability to degrade caffeine were identified as Aspergillus and Penicillium. Yamaoka-Yano and Mazzafera [46] isolated more than 20 bacteria strains from soil collected under coffee plants,observing predominance of Pseudomonas sp.,which was also the most efficient caffeine degrader. Yamaoka-Yano and Mazzafera [47] used the same P. putida strain,used by Yamaoka-Yano and Mazzafera [46],to study coffee husk decaffeination. Different proportions of inoculum and husk were incubated during 30 days,resulting in a reduction of up to 80% of caffeine. At shorter incubation periods (9 days) a 40% reduction was observed.

Following this review,it appears that much research has focused on the use of waste and by-products of coffee to feed the animals. 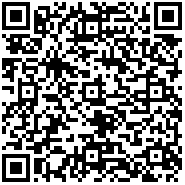