Mutagenesis via Exposure to Gamma-rays in Tuberose (Polianthes Tuberosa)

Tuberose (Polianthes tuberosa) is a plant with low genetic diversity and cannot be used for cross breeding because of its double nature. Therefore, the use of modern breeding techniques such as mutation and gene transfer are usually considered. In this study, in order to create diversity in tuberose, gamma-ray irradiation treatment was used on mature bulbs of tuberose with gamma ray doses of 10, 50, 100, 200 and 400 Gy. Some characteristics of control and treated plants such as survival and sprouting rate, flowering time, leaf number and size, size and weight of the florets, number of petals, internode distance, plant height and stem diameter is measured in this study. The experiment was performed in a template design of completely randomization in a research greenhouse at University of Tehran, Iran. Experimental results showed that at the dose treatment of 10 Gy, all plants sprouted with a time delay, and at doses of 50 and 100 Gy, 57% and 29% of plants were sprouted and grew, respectively. Though, at dosages of 200 and 400 Gy, none of the plants survived. In this experiment, changes in plant morphology were observed according to the different treatments, but no changes were observed in flower color.

Tuberose, Polianthes tuberosa L. (Agavaceae) is an herbaceous perennial, commercially grown for its fragrant cut flowers and for the perfume industry (Edwards, 2006). Tuberose is native to Mexico and grown in tropical and semi-tropical regions. It is cultivated commercially by bulbs. Leaves are tubular and waxy-white in color and spikes have up to 45 cm long that produce clusters of fragrant waxy white flowers [1,2].

The long spike of flowers is excellent for cut flowers and people like their sweet fragrance [3]. It has waxy, bright and white flowers and is a perennial plant. The flower fragrance of tuberose is intoxicating and can be useful for improving human inspire emotional integrity. It also aids in concentrating the mind’s activity. It affects the right side of the brain through neural stimulation and brings a state of peace to an individual’s body and behavior [4]. An indirect reason for the very low diversity of this plant and also as much low diversity for the single, dwarf and the double varieties is due to the lack of sex organs. Seed production cannot be relied upon in hybridization programs. On the other hand, the importance of diversity in horticultural crops especially ornamental plants is essential for a sustainable market in the long time run.

Therefore, the use of modified breeding methods such as mutation, polyploidy, tissue culture and gene transfer can be beneficial. More specifically, mutation is a method can be very effective and valuable in this case. However, the occurrence of natural mutations is extremely low. Mutation techniques are useful methods to increase the diversity of biological organisms. Due to the presence of carotenoid pigments in leaf bases of tuberose, especially crownleafy, it can be expected that mutations may change color in the florets.

Mutagenesis is a common phenomenon whereby the genetic improvement of crops is partially achieved. Its prevalent purpose is to add genetic variation to an existing gene pool or give rise to new varieties of crops. Furthermore, it is not restricted by the regulations that are imposed on genetically modified organisms [5-7]. By 2007, mutagenesis had caused the development of about 2300 new varieties (in many species of plants) worldwide. These cultivars were documented, released and formally recognized in the database of mutant varieties of the Food and Agriculture Organization and International Atomic Energy Agency (FAO-IAEA) [8]. These mutant plants include 566 ornamentals [9]. As a result of mutation breeding, new varieties of Alstroemeria, Dahlia, Bouguainvilla, Rose, Begonia, Streptocarpus, Carnation, Azalea, etc. have been introduced. Mutants are widely used in plant research, such as plant physiology, genetics, and plant breeding [10]. The main advantage of mutation breeding is the possibility of improving one or more characteristics of plants without changing the rest of the genotype traits [11].

All species of plants and animals can be undergone of mutation using physical and chemical mutagens. Physical mutagens usually include non-ionizing radiation (UV) or ionizing radiation (X ray, gamma, alpha, beta and fast and slow neutrons). The most prevalent chemical mutagens in plants mutagenesis are ethyl methane sulfonate (EMS), methyl methane sulfonate (MMS), hydrogen fluoride (HF), sodium azide, N-methyl-N-nitroso urea (MNU) and hydroxyl amine [7]. Among the physical mutagens, radiation is effectively used for the induction of mutation. Gamma rays irradiation is the most successful method for mutation in crops which are propagated via seed [9].

Ornamental plants possess ideal potentials with regards to the induction of mutations for many economically important traits. Floral traits or growth habits can be seen easily after treatment with mutagens [12]. The aim of this experiment was to increase the genetic diversity of tuberose species. Mutation breeding supplements conventional plant breeding as a source of increasing variability and could confer specific improvement without significantly altering its phenotype. The successful utilization of gamma rays to generate genetic variability in plant breeding has been reported in many crops [11].

To perform the experiment, mature bulbs of the vigorous double type of tuberose were used. The bulbs were grown from the bulblets of the previous year. Bulbs were harvested and the roots and aerial parts were detached. Bulbs were kept in stock for a few months at 4-6°C. The bulbs were subsequently washed in water for 24 hours. The water was replaced every 8 hours. The fungicide Benomyl (5%) was used for the last 8 hour duration and finally, they were rinsed. In order to induce mutations, the bulbs were treated with gamma-ray via source of cobalt (Co60) with doses of 10, 50, 100, 200 and 400 Gy in Karaj Nuclear Research Center for Agriculture and Medicine (Tehran, Iran). The bulbs were immediately planted in plastic pots in a greenhouse.

After planting, the sprouting and plant growth were recorded every day to obtain the survival percentage and sprouting rate. At the beginning, all bulbs sprouted and reached a height of 2-3 cm above soil surface. However, those bulbs that had been under higher doses of irradiation were grown with a few days delay and were wilted. In this experiment, we perceived sprouting to occur when bulbs managed to produce leaves and initiate a flowering stem. However, the flowering stem was the only criterion used for the measurement. The sprouting time was measured using equation below [13]:

According to the experimental results, significant variances were recorded in the survival and sprouting time at different doses. Tables 1and 2 represent analysis of variance and mean comparison of morphological traits for control and treated plants, respectively. Higher doses reduced survival and growth rate. All the bulbs sprouted and grew with a short time delay at the dose of 10 Gy. However, at doses of 50 and 100 Gy, a small amount of the bulbs sprouted and the rest were destroyed. No plant grew at doses of 200 and 400 Gy. The onset of flowering time was significantly different for the control with the treatmed plants. Results showed that higher doses brought further delays in flowering (Table 2). According to various reports, mutagenic agents reduce viability and sprouting speed [14,15]. The application of gamma irradiation on the tuberose resulted in reducing growth and increasing mortality at high doses [16]. The reason of the reduced survival could be due to the severe damage to genetic material, cell damage and cellular components. Rupture of cellular organelles is another rationale behind mortality.

Table 1: Analysis of variance of morphological traits for control and treated plants.

The alteration of height from control plants was the least for the dose of 10 Gy. Higher doses caused more significant reduction in plant height: doses of 50 Gy and 100 Gy caused significant differences in terms of statistical analysis (p ≤ 0.01) (Table 1). Abraham and Desai [16] reported that when the intensity of the applied dose increases, the height of tuberose and lily shorten, in a manner that is evident through the reduction in internode distance. However, no significant changes were obsereved with regard to the number of leaves.

Grossman and Craig [17] examined the progeny of the second generation of geraniums. In their study, the first generation had been irradiated with 10, 20, and 30 Gy of gamma rays. The second generation was cultivated by seed. They recorded length of stems and branches and the number of branches and leaves. Their results showed that the plants which had been irradiated with a dose of 30 Gy displayed a 21% reduction in stem length and a 30% decrease in branch height in regard of control plants. Futhermore, similar results were observed in the first generation of their research.

In this study, length and width of plant’s leaf were measured and analyzed. Difference of these traits for control and treatment plants were significant at p ≤ 1% and p ≤ 5% level, respectively. Treated plants had smaller and weaker leaves compared to the control. This weakness was more evident at higher doses. With regard to the stem diameter, a comparison between the control and treated bulbs with dose of 10 Gy showed no significant difference. Furthermore, no significant difference was observed when comparing the dose of 10 Gy with 50 Gy, and 50 with 100 Gy. The peduncle length of the control Gy, but higher doses exerted negative influence (Figure 1). However, reduction of the number of florets was greater at higher doses. We considered the number of floret petals as a marker to evaluate the effect of radiation. No significant difference was observed between the control and the treated plants with the doses of 10 and 50 Gy, but the dose of 100 Gy caused a significant reduction in the number of floret petals, as compared to other doses and the control (Figures 1 and 2). 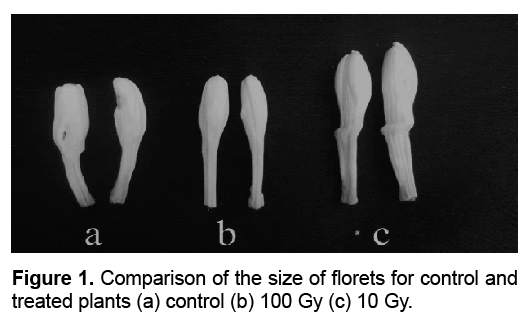 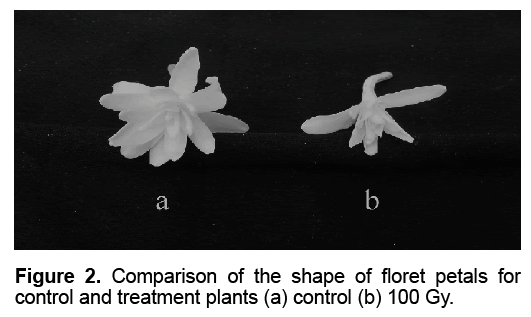 Figure 2: Comparison of the shape of floret petals for control and treatment plants (a) control (b) 100 Gy.

An interesting result was achieved when a plant, treated with the dose of 10 Gy, discovered with quadruple florets, while the normal floral arrangement is binary. Another characteristic of this mutated plant was that the florets situated at the center of the florescence began to open, and then this anthesis proceeded bilaterally to the two ends (upstream and downstream) of the florescence (Figure 3). This is in contrast to the normal state of florescence when a thesis begins from the bottom and progresses upward. The length of florescence decreased exponentially as the doses of irradiation group did not possess any significant difference compared to all treatment groups (Tables 1-3). 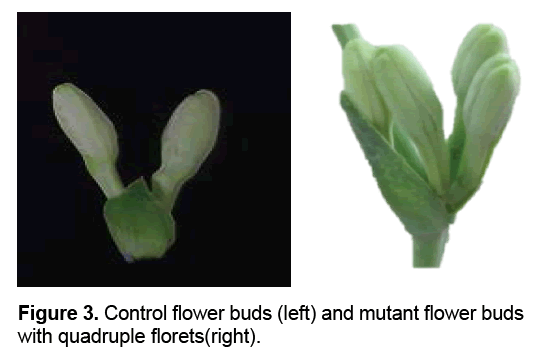 Table 3: Mean comparison of traits for control and treated plants.

Results also showed that both floret length and weight increased when exposed to the dose of 10 increased; the highest dose led to the shortest length of the flowering inflorescence. In this study, gammaray irradiation treatment was used on mature bulbs of tuberose with gamma ray doses of 10, 50, 100, 200 and 400 Gy to create diversity in this plant. Results showed that the dose of 10 Gy was the most suitable dosage for inducing mutation in tuberose. It is advised that future attempts to manipulate tuberose characteristics should be based on a larger population under irradiated treatment. If so, the prospect to achieve mutants with diversely colored petals can be envisioned in the horizon of breeding this plant (Figure 3). 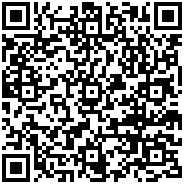