Carob (Ceratonia siliqua L.), which has been widely grown in the Mediterranean region, belongs to the Caesalpinaceae subfamily of the family Leguminoseae [1,2]. Carob tree is used in reforestation of arid and degraded areas and also as for ornamental purposes [3-5]. However, in recent years, it has been used in the food industry as bioresource and biomass substrate and thus has attracted the attention of producers because of increasing market value. The pulp and the seeds have some interesting properties and are often used in food and pharmacological industry [1,6]. The pulp content in the pod ranges from 73-95 % [7]. The pod of the carob has a high energy value 17.5 kJ/g D.M. [5,8] and has long been used as a feed for livestock and human consumption, including sweets, biscuits, and traditional carob concentrate called “pekmez” [9,10]. When the fruits are ripe enough, they have 91-92% total dry matter and 62-67% total soluble solids, which consist of 34-42% sucrose, 10-12% fructose, and 7-10% glucose [9]. Carob pods are also characterized by high sugar content 500 g/kg [1,6,11]. Moreover, carob pods contain appreciable amount of fiber (4.2-39.8%), depending on the type of the extracted fiber [7,12]. The carob is rich in calcium, antioxidants and polysaccharides. Carob also contains phenolic compounds from 2-20% D.M. [6,13]. These phenolic compounds present opportunities chemo-preventive interesting against certain cancers, especially those of the gastrointestinal tract. These phenolic compounds are mainly composed of gallic acid, syringic, p-coumaric, m-coumaric, benzoic acid and hydroxytyrosol [14]. Carob pulp is a good source of polyphenols (mainly tannins 16-20%) [5,13], and protein (2.7-7.6 %) but it is poor in lipid (0.4-0.8%). The pod fiber content plays a role in hypocholesterolemic and hypoglycemic regulation, whereas phenolic compounds can be used as antioxidant additive [15]. Moreover, the locust bean gum (additive E 410) extracted from the endosperm of seeds is used as stabilizer and thickening agents in food industry [16]. The locust bean gum is also applied in pharmaceutical industry as drug delivery [17]. Chemical composition of carob had been studied extensively for different countries of the Mediterranean area. It had been observed that this composition is depending not only on technological factors such as the extraction and analytical methodologies, but also on the genotype of the plant, the geographical origin, the climate conditions and the harvesting and storage procedures [1,5,13,18-20]. However, in spite of the great interest to carob and their use in different applications, few studies are available on Algerian carob. The obtained carob extract has been utilized for production of value added products, especially by fermentation as suggested [21,22]. Lactic acid can be one of these value added products due to its current and future potentials.

In Algeria, the production of dates is estimated to 473 000 tons which 60 000 to 75 000 tons is minus appreciated on the market, constituted of common of dates and offal’s of Deglet-Nour [23]. Dates are the subject of an important marketing activity, in particular the famous Deglet-Nour variety. This one holds the monopoly in national and international markets. It profits even from certain marketing (presentation, packing). In parallel the other varieties known as common are less appreciated, less marketed and less competitive; they represent approximately 30% of the national production [24,25]. Subsequently, they provide a very high energy and nutriments: sugars, vitamins and minerals. The waste and un-wanted materials usually issued from fermentation one being used to produce, protein and carbohydrate. The valorization of common dates by the biotechnical processes represents a solution of choice insofar as it allows producing some substances to high added value [26]. The dates have already been the subject of many tests in other countries. They are exploited as fermentation substrate for various metabolites production such as citric acid, ethanol and even biomass production (yeast bread) [27]. The objective of our study was to use of Lactobacillus bulgaricus and Streptococcus thermophilus for kinetics study of lactic acid production from Carob pods syrup and Date syrup.

The carob (Ceratonia siliqua L.) used in current experiments was harvested in the region of ELBORDJ (Mascara, Algeria) and the date (Phoenix dactylifera L.) was a variety half soft, known as Hmira badly exploited, cultivated in the area of Adrar (South-East of Algeria). The choice of these varieties is justified by its availability and important nutritive value, especially the one of reducing fermentable sugars such as glucose and fructose. Its morphological characteristics are given in Table 1 and Figure 1.

The biologic material used is cultures of Streptococcus thermophilus and Lactobacillus bulgaricus, derived from Orolait of Mascara (Algeria). The mixed culture is homofermentative (homolactic) which means that more than 90% of metabolites are produced by the lactic fermentation.

Five 10-fold dilutions of the mixed culture (Streptococcus thermophilus and Lactobacillus bulgaricus) were then prepared and these were inoculated on plates of MRS agar acidified with glacial acetic acid to pH 5.4, MRS to pH 6.5, M17 medium to pH 7.1 and incubated anaerobically at 45°C during 24-48 hours. Colonies with typical characteristics were randomly selected from plates and tested for Gram stain, cell morphology, catalase and oxidase reaction before further sugar fermentation and characterization tests [28,29]. The short term conservation of the pure isolates was done on solid media [30]. After growth at optimal temperature, the culture was maintained at 4°C and cultures were renewed every month. The long-term conservation of the purified isolates was carried out in MRS broth containing glycerol (Merck, Darmstadt, Germany) (v/v 70/30) and were maintained as frozen stocks at -80°C [31]. Strains were characterized according to the methods and criteria of Buchanan et al. [32] and Klein [33] as follow: They were checked for gas production from glucose in MRS broth containing Durham tubes [34]. Growth at different temperatures was observed in MRS and M17 broth after incubation for 5 days at 15, 37, 45°C then 12 days at 5 and 10°C [30]. The ability to grow at pH 3.9 and 9.6 (for MRS broth) and at pH 9.6 (for M17 broth) were tested [35]. The tolerance to NaCl was studied by growth in MRS and M17 broth containing NaCl at concentrations 2%, 4% and 6.5% as described by Stiles and Holzapfel [36]. Arginine dihydrolase was determined in MRS broth supplemented with 0.3% arginine, which was incubated for 3 days, followed by NH3 detection by addition of Nessler’s reagent. Hydrolysis of esculin and the effect of bile salts were observed on bile esculin agar. Heat resistance was determinated in MRS and M17 broths at 60 and 65°C for 30 min [37]. Citrate utilization was studied on the media of Kempler and Mc Kay [38]. Production of dextran was recorded on MSE agar [39] and the production of acetoine from glucose was determined by using the Voges-Proskauer test [40].

All experiments were carried out in a 2 L jar fermenter (Applikon Biocontroller ADI1030) with an initial volume of 1.5 L at 45°C. The agitation speed was set at 300 rpm to insure complete mixing of the fermentation medium. The inocula were incubated at 45°C for 12 h at 300 rpm before their transfer to the fermenter in a 10%. The culture pH was maintained at 6.5 by automatic addition of 25% (w/w) NH4OH solution using a computer coupled peristaltic pump during the 24 hours of fermentation. The samples were withdrawn at desired intervals and frozen for further analysis. Three cultures of Lactobacillus bulgaricus were used: in MRS broth, in date syrup at concentration 20% and in carob pods syrup medium at concentration 20%. The MRS medium used in growth and inoculum preparations contained the following components (in g/L): 10 Soya peptone, 10 beef extract, 5 yeast extract, 2K2HPO4, 5NaCH3CO2, 3H2O, 2 triammonium citrate, 0.2 MgSO4, 7H2O, 0.05 MnSO4, H2O, 20 glucose and 1 mL Tween 80. The same cultures are made by Streptococcus thermophilus in Naylor and Sharpe medium, date syrup and carob pods syrup. The Nylor and Sharp medium (Yeast Glucose Lemco Broth) used in growth contained the following components (in g/L): 10 peptone, 10 beef extract, 3 yeast extract, 5 sodium chloral and 5 glucose. The evolution of the biomass, the residual sugars amount and the lactic acid production are followed in regular time intervals. The various analyses carried out allow the following time evolution of the component concentrations present in the culture medium. From these raw data it is possible to calculate the fermentation kinetic parameters in the batch culture by the calculation of the specific rate of growth μ in h-1, of sugars consumption Qs in g.g-1.h-1 and of lactic acids production Ql.a in g.g-1.h-1.

The maximal specific growth rate (μmax) was determined from the slopes of the plotted linear curve: Ln X/X0=f (t).

3.1 Isolation and identification of Streptococcus thermophilus and Lactobacillus bulgaricus

Colonies on MRS medium are whitish, smooth and small. These strains are Gram+ (purple) and bacillary form. The development on M17 gives white colonies, round, opaque, with smooth boundary. These strains are present in the form of cocci in pairs or chains Gram +. Results are shown in the Figure 2 and Table 2. 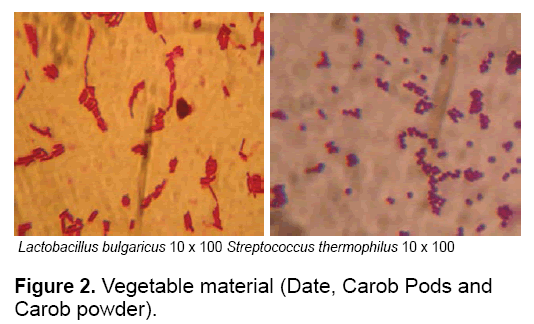 The carob pods syrup has a 94.44% of moisture and the date syrup which has been the subject of our work has similar water content 92.4%, we agree that a product with high water content facilitates lactic acid bacteria proliferation and helps for a better substrate-enzyme contact since free water is the nutriments carrier. Results are shown in the Table 3.

Date syrup will be very rich of reducing sugars 27.3 g/L and 30.69 g/L for carob syrup. Reducing sugars are a carbon source that can satisfy the lactic acid bacteria requirements. The protein fraction and amino acids are considerable; therefore it can serve as a nitrogen source. An ash content of 0.8% for date and 0.2% for carob indicates its richness of minerals including potassium, sodium, phosphor, zinc, Magnesium, Manganese and calcium. The date syrup has an acidic pH 4.62, acidities 26 and carob syrup has pH 5.25 which indicates its good nutritional quality (no bacterium contamination) suitable for the proper development of lactic acid bacteria. The different physicochemical and biochemical analyzes show the richness of date and carob pods syrups in nutritional elements that makes them favorable to the lactic acid fermentation.

This study was designed to evaluate the potential of date and carob pods syrups for lactic acid production by Lactobacillus bulgaricus and Streptococcus thermophilus. Results are shown in the Table 4.

Figure 3: Evolution of acidities for batch fermentations by Lactobacillus bulgaricus and Streptococcus thermophilus.

According to the obtained results, it is observed that the Lactobacillus bulgaricus and Streptococcus thermophilus growth’s for the fermentations are characterized by a short duration of the latency phase which indicates that the inoculated cells were in full exponential phase and the perfect adaptation of strains to the different medium used. Results are shown in the Figure 4.

The biomass evolution of Streptococcus thermophilus in the Naylor and Sharpe broth, Date syrup and Carob pods syrup begins respectively with an initial optical density of 0.092, 0.077 and 0.098 and evolves gradually to achieve respectively after 40h of fermentation to a maximum value respectively OD=1.75, 1.16 and 0.7.

However, decreasing of sugar rates is very faster in the MRS broth, Date syrup and Carob pods syrup.

Figure 5: Evolution of residual sugars in g/L for batch fermentations.

Figure 6: Evolution of specific rate of growth (μ in h-1) during batch fermentations.

For the Carob pods syrup fermentation, the yield of sugar conversion into biomass is 1.47 g/g and 6.24 g/g into lactic acid. It seems that the majority of the sugar is used for the cellular maintenance and reproduction and the remainder for the lactic acid production.

The bioconversion of agricultural by- products mainly the ones rich in fermentable sugars has an economic and strategic interest. The main aim of this study was to use of Lactobacillus bulgaricus and Streptococcus thermophilus for kinetics fermentation of the Carob pods syrup and the Date syrup. By its biochemical composition, the Carob syrup and Date syrup are very rich in carbohydrates and nutritional elements. Which make it a substrate of choice for the development of high value added products? Kinetics study of growth of Lactobacillus bulgaricus and Streptococcus thermophilus in Carob syrup and Date syrup showed that these medium are favourable to the lactic acid fermentations.

Authors have declared that no competing interests exist.