Curcumin (diferuloylmethane) is the most active component of Curcuma longa L. Several clinical trials have found curcumin to be a notable anti- inflammatory and antioxidant compound. The present study evaluates the effects of curcumin and indomethacin treatment on the inflammatory responses and on plasma phosphatase and transaminase activities, employing an adjuvant–induced arthritis model in rat. Arthritis was induced by the subcutaneous injection of a Freund’s complete adjuvant into the plantar surface of right hind paw of rats. Development of the inflammatory response was assessed over a 21-days period. In this study a sample of 32 male Wistar albino rats (180-220 gr) were used which randomly divided into four groups with eight rats per group. Group I served as normal control rats (untreated), group II arthritic rats which received vehicle, group III arthritic rats treated with curcumin (30 mg/Kg orally) and another group, arthritic rats treated with indomethacin (3 mg/Kg reference drug orally). Treatment was started from 7th day of adjuvant injection and was terminated on day 21. At the end of the experimental period, the animals were anesthetized and killed; blood samples were collected and prepared for measurement of alkaline phosphatase (ALP), aspartate (AST) and alanine aminotransferase (ALT) activities.

In conclusion, the present data suggest that aminotransferases and alkaline phosphatase were significantly reduced in arthritic rats after the administration of curcumin. This reducing effect may be related to their anti-inflammatory activity.

Rheumatoid arthritis (RA) is a chronic autoimmune disease characterized by joint swelling, synovial inflammation and cartilage destruction and commonly leads to significant disability and a consequent reduction in quality of life [1-4]. Epidemiology of the arthritis in female: male is 3:1 and afflicts generally 0.5-1.0% of the population around the world [5]. RA caused by number of pro-inflammatory molecules released by macrophages [6]. These include reactive oxygen species and eicosanoids such as, prostaglandins, leukotrienes and cytokines [7,8]. The regulation of these mediators secreted by macrophages and other immune cells therefore may control the chronic inflammatory conditions [9,10]. Many studies have demonstrated the involvement of aberrant Arachidonic acid metabolism in the inflammatory response by generating potent chemical messengers known as eicosanoids. Membrane phospholipids, the major source of arachidonic acid are hydrolyzed by phospholipase A2 (pLA2); the released arachidonic acid is further metabolized by three different types of oxygenases: cyclooxygenase (COX), liopxygenase (LOX) and cytochrome P450. Modulation of arachidonic acid metabolism by inhibiting these enzymes has been considered as an effective mechanism for chemoprevention [11]. For the treatment of RA, although non-steroidal anti-inflammatory drugs (NSAIDs), steroidal agents and immunosuppressants usually used, their side effects and toxicity call for new and more effective natural drugs.

Curcumin (diferuloylmethane) is a major constituent found in the spice turmeric, which is a dried powder from the rhizomes of Curcuma longa L. This spice has been used as a traditional medicine for treatment of inflammation, gastrointestinal disorders, hepatic disorders, diabetic wounds, skin wounds, rheumatism, sinusitis and other disorders [12] Curcumin is also a food coloring and flavoring agent approved by the Food and Drug Administration [11]. It is believed that curcumin is a potent antioxidant and anti-inflammatory agent [13] (Figure 1).

Curcumin affects arachidonic acid metabolism by blocking the phosphorylation of cPLA2, decreasing the expression of COX-2 and inhibiting the catalytic activities of 5-LOX. These activities may contribute to the anti-inflammatory actions of curcumin and its analogs [11]. Evidence suggests that in some experimental conditions, curcumin can have similar anti-inflammatory activity as some of the common NSAIDs like indomethacin, Vioxx, Celebrex, and ibuprofen, but without many of the side effects, such as gastrointestinal distress and cardiovascular complications [14,15].

Adjuvant induced arthritis (AIA) is experimental rats, a chronic inflammatory disease characterized by infiltration of the synovial membrane and associated with destruction of the joints resembles closely to the human rheumatoid arthritis [16-18]. Tissue damage was assessed by measuring the activities of enzyme in the serum and in the respective organ, since liver impairment is also a feature of adjuvant arthritis [19]. The increase in aminotransferases is due to their release from the cells of the damaged organ [20]. Hyperphosphatasamia has been observed occasionally in the patients with rheumatoid arthritis, and it has been suggested that the serum alkaline phosphatase level is related to the activity of the disease [21]. The present study is designed to investigate the effects of curcumin and indomethacin on inflammation and the relationship between serum alkaline phosphatase (ALP), aspartate aminotransferase (AST) and alanine aminotransferase (ALT) activities and rheumatoid arthritis in AIA rats.

Animals: As sample of 32 male Wistar albino rats (180-220g; departmental animal house; Faculty of Science; Urmia University) were used. They were maintained under controlled temperature (22±2ºC) and relative humidity (40-60%) with standard environmental conditions of 12h light/dark cycle in the departmental animal house. Food and water were provided ad libitum throughout the experiments. Rats were acclimated to their surroundings over 1 week to eliminate the effect of stress prior to initiation of the experiments.

2.2 The induction of arthritis

The method described by Newbould in 1963 was employed with some modifications [22]. Arthritis was induced by a single subcutaneous injection of 0.1 ml Freund’s complete adjuvant (FCA), suspension of heat-killed Mycobacterium tuberculosis in mineral oil, into a footpad of the right hind of male rats. A glass syringe (1 ml) with a 21 GA needle was used for injection, while, the vehicle control rats were injected with 0.1 ml normal saline. The rats were anesthetized with Ketamin (70mg/kg intraperitoneally [I.P]) and Xylazin (5 mg/kg I.P) prior to and during adjuvant injection.

Animals were divided into four groups of eight animals in each group as follows:

The hind paw thicknesses (mm) were measured using a vernier caliper on days 0, 7, 14, 21 after FCA injection. At the end of the experimental period (on day 22nd), rats were fasted overnight and killed after general anesthesia by inhalation of ether. Blood samples were collected from the abdominal aorta and serum immediately separated.

Figure 2 depicts the anti-inflammatory effect of curcumin and indomethacin on the changes in paw edema of control and experimental animals. Swelling and redness developed over a 24 h period in the foot injected with adjuvant. This inflammation reaction increased over time when disseminated arthritis appeared and remains constant by the end of 1 week. After curcumin and indomethacin treatment the increase in swelling of the injected hind paw that occurred with the appearance of poly arthritis was suppressed .Upon curcumin administration similar to indomethacin after seven days of adjuvant injection, the inflammation were started to decrease significantly when compared to AIA rats. 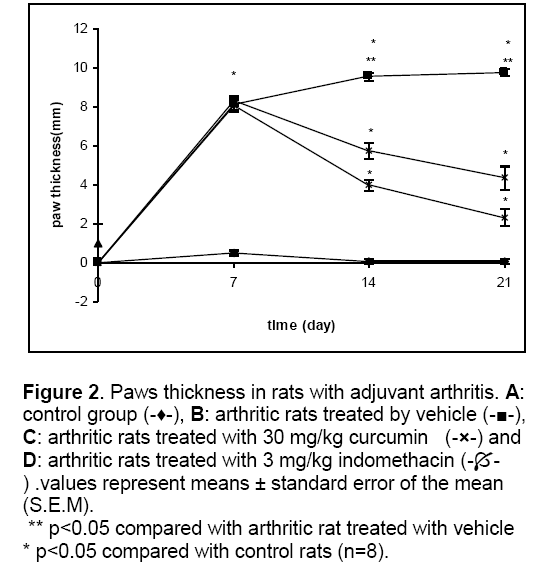 Figures 3, 4 and 5 show the changes in the activities of serum aminotransferases and ALP in control and experimental animals. As a result of inflammation induced by adjuvant, the levels of AST, ALT and ALP were increased (p<0.05) in all arthritis rats when compared to control rats. After curcumin treatment, the levels of these enzymes were significantly decreased (p<0.05) in group III rats when compared to AIA rats. arthritic rats treated with 3 mg/kg indomethacin .values represent means ± the S.E.M. same words aren't significant in p<0.05 in TUKEY MRT (n=8). 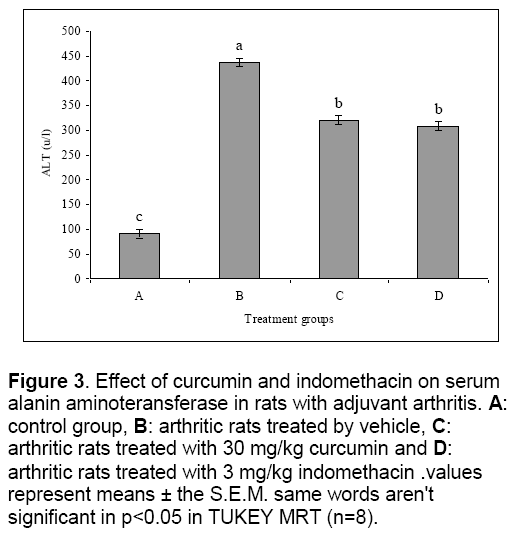 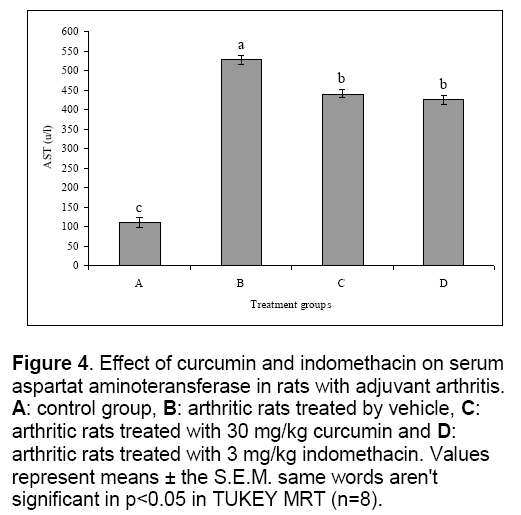 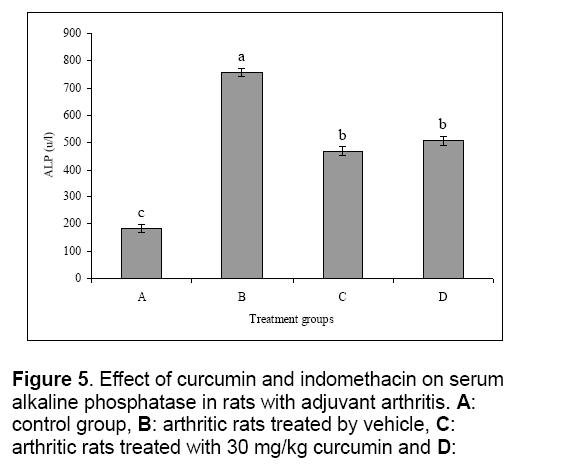 In this study, was investigated effects of curcumin and indomethacin of paw swelling and activity of hepatic enzymes in adjuvant arthritis rats. Freund’s complete adjuvant is generally used induce arthritis in animal models [25]. Adjuvant arthritis in rat shows several clinical and histological similarities to human RA [26]. In this study, interplanetary injection of adjuvant into right hind paw rapidly induced paw swelling and redness.

Spice principle like curcumin was shown to inhibit the synthesis of proinflammatory prostaglandins and leukotrienes [27]. Curcumin has been shown to possess beneficial effects in alleviating arthritic symptoms in both animal and human models [12,28]. Bina Joe et al, have show that curcumin inhibits the uptake of arachidonic acid by macrophages, thereby limiting the availability of the substrate for eicosanoid production [29]. Shimizu et al, have demonstrated that curcumin also reduces the conversion of linoleic acid to arachidonic acid [16]. Like curcumin, other NSAIDs such as indomethacin lower the production of potent proinflammatory agents such as prostaglandins [29]. The results of the present study indicated that the curcumin exhibits anti-inflammatory properties in rats with Freund’s adjuvant-induced arthritis.

Assessment of the levels of AST, ALT and ALP provides an excellent and simple tool to measure the anti-arthritic activity of the target drug [30]. The activities of aminotransferases and ALP were significantly increased in arthritic rats, since these are good indices of liver and kidney impairment which is also considered a feature of adjuvant arthritis [31]. Serum AST and ALT has been reported to play a vital role in the formation of biologically active chemical mediators such as bradykinins in inflammatory process [32]. Also, Niino-Nanka et al confirmed a positive correlation between the increased activity of serum alkaline phosphatase and the disease activity in RA [33]. Elevated levels of serum ALP in AIA rats can be due to increase in the liver and bone fraction or to an increase of both isoenzymes. This in turn implicates a localized bone loss in the form of bone erosion and peri articular osteopenia, as the enzyme is released into circulation in the course of bone formation and resorption [21].

This study has shown that an immunological adjuvant administered to rats alters hepatic biochemistry. Most reports suggested an increase of the baseline serum ALP level in RA, although of underlying mechanism remains uncertain [34]. Recently, observation of serum sample from patients with RA suggested that ALP activity was detectable at a high prevalence of about 30 %[35] Also, Hung et al reported that adjuvant–treated rat showed significantly higher serum biochemistry markers (AST, ALT and ALP) than normal rats [26]. Reddy and Lokesh found that oral administration of curcumin (30 mg/kg body weight) for 10 days lowered the liver and serum lipid peroxide levels, serum ALT, AST enhanced by I.P. injection of iron in rats [36]. Also Arafa reported Curcumin also decreased the enzyme activities of serum AST and ALT [37]. The results this study indicated that inflammatory and plasma ALP, AST and ALT activities were very elevated in the arthritic rats which curcumin treatment to similar that indomethacin were significantly reduced the swelling of paws and plasma ALP, AST and ALT activities in arthritic rats.

In conclusion, in this study, the development of inflammation during induced arthritis may be related to the biochemical changes of hepatic enzymes and the present data suggest that aminotransferases and alkaline phosphatase were significantly reduced in arthritic rats after the administration of curcumin. This reducing effect may be related to their anti-inflammatory activity.

This study was supported by a grant from the research council of Urmia University, Urmia, Iran.