Among the tools of modern biotechnologies tissue culture is being increasingly applied to complement other in-situ or ex-situ conservation methods. Within the Institute of Biology from Bucharest, several in vitro techniques have been developed, with recent establishment of endangered plant tissue culture collections. Hormonal regulation of the regeneration process was histologically monitored in order to develop for the first time, a protocol for efficient multiplication and establishment of an in vitro collection of Alyssum borzaeanum germplasm. The most efficient hormonal combination for shoot regeneration was 4.43 μM BAP and 0.57 μM IAA. The described correlations between morphogenetic pattern and growth regulators type and content enable the control upon the development processes being useful for further investigation and use of Alyssum species.

Alyssum borzaeanum is an endangered endemic plant with a limited distribution along the coast of Black Sea. It was first mentioned in Romania by E.I.Nyárády [1]. It was also cited in Ukraine [2],Turkey,Northern Greece [3],and Bulgaria,where it is classified as A.tortuosum Willd. subsp.borzaeanum (Nyár.) Stoj. & Stef. [4]. In Romania it is found only in the Constanta district,between Tuzla and the seaside. In the Red List of Higher Plants from Romania [5],A.borzaeanum is classified in the endangered sozologic category,and since 1998 it has been included in Annex I of the Bern Convention. Apart of the conservation interest,Alyssum species are investigated mainly because of their phytoremediation potential by nickel hyperaccumulation [6-9]. According to Kramer et al. [10] there are more than 400 hyperaccumulating species among which 48 belong to Alyssum genus. Furthermore a number of Alyssum species are used as a traditional herbal medicine,especially seeds that are known to contain a large amount of bioactive substances recommended by herbalists for coughs,asthma,lung infections,demulcent and kidney stone [11,12]. Previous methods of ex-situ culture of Alyssum species were developed to investigate their nickel hyperaccumulation capacity [6,8]. There is a single report upon A. borzaeanum somatic embryogenesis and the use of in vitro regeneration potential for conservation purposes [13]. Hormonal regulation of the explant morphogenetic response (embryogenesis or organogenesis) is very complex and varies widely between species of the same genus and sometimes between the varieties of the same species. In this context the studies targeted to specific taxa are of peculiar importance. In the present work hormonal effect upon plant regeneration was histologically monitored in order to select the most efficient in vitro tissue culture protocol. The described methods offer a valuable alternative for ex situ conservation of this endangered endemic plant and could be also applied to other Alyssum species for conservative,phytoremediation,bioactive substances extracts or other purposes.

Mature seeds collected from Agigea Natural Reservation were surface disinfected in 70% ethanol for 1minute,followed by 8 minutes in 0.5% (w/v) Sodium dichloroisocyanurate and washed three times in double distilled sterile water. Seed were sterile inoculated on basal Murashige and Skoog (MS) medium [14],without growth regulators and were incubated at 200C in dark condition. Four days old seedlings were used as explant source. Explants (fragments of cotyledons and hypocotyls about 3-5 mm long) were placed on MS medium supplemented with growth regulators as shown in Table 1. Each variant consisted of 10 explants and three repetitions per variant were used. MS medium without growth regulators was used as control. 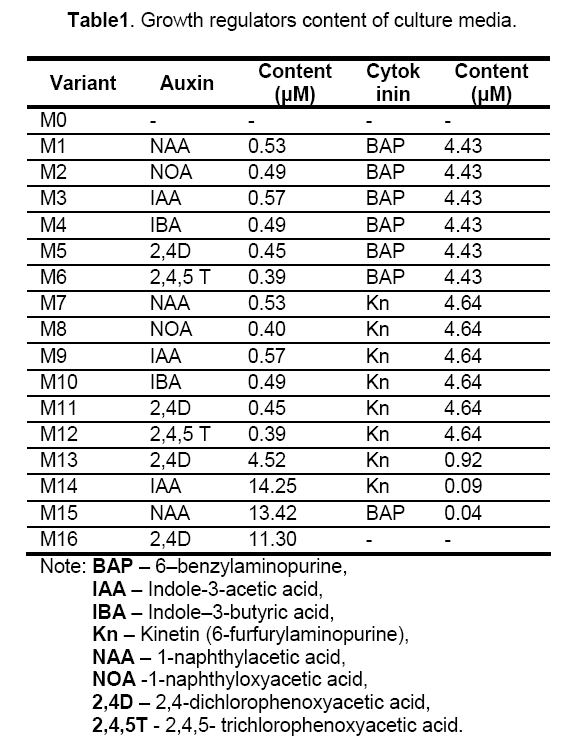 Established cultures were maintained at 200C with a 16 h photoperiod.

After 8 weeks of culture well developed shoots were transferred for root regeneration to MS medium without growth regulators. After 4 weeks the plantlets with well-established roots were transplanted to autoclaved soil in pots and watered for 10 days with a half-strength MS solution containing 2% sucrose. Micropropagated plantlets were successfully established in soil with 85% survival rate after hardening.

Fresh tissue samples in different developmental stages were fixed for 2 weeks in a formalin buffered solution (15% (v/v) formalin,2% (w/v) sodium bicarbonate). Dehydration was conducted at room temperature in graded ethanol series (5 to 100%),followed by clearing with xylene and embedding in paraffin according to usual procedures [15]. Serial sections (7-10μm thick) were cut using a rotary microtome and transfer onto glass slides. Paraffin was removed and the sections were stained with 0.12% (w/v) toluidine blue,in a water solution containing 5% (w/v) sodium tetraborate decahydrate and 0.1% (w/v) basic fuchsin [16] and finally mounted in synthetic resin (Entallan). Histological observations were made using bright-field light microscopy under a Nikon Eclipse E200 microscope and micrographs were recorded using a Nikon Coolpix 5400 digital camera.

The use of combinations of growth regulators (auxins and cytokinins) induced a range of developmental responses. Within 30 days of culture explants shows 6 distinct types of responses,as follows:

1 – NM (Nonmorphogenetic) – Explants were swelling progressively without any modification of epidermal cells. Cultures on fresh media did not result in any morphological events. After more than 40 days of cultures the swollen explants become necrotic and degenerate.

2 – C (Callogenesis) – Explants were disorganised by intense divisions of mesophyll cells resulting in a white smooth callus without morphogenetic potential. In cultures for longer than 30 days calli turned brown and gradually degenerated and died.

3 – ISE – Explants were disorganised by intense divisions of both external and internal tissues resulting in a rough callus with a number of mitotic active structures. After 45 days of culture,the proembryonic structures developed somatic embryos and finally shoots and plantlets (Figure 1). This regeneration pathway corresponds to indirect somatic embryogenesis process. 4 – DSE – Some cells from epidermis and subepidermis were active dividing result in embryogenic precursor structures which dedifferentiated into somatic embryos (Figure 2 ). Within 40 days of culture the embryos were maturated and germinated generating plantlets. This pathway characterize direct somatic embryogenesis process 5 – R (Rhizogenesis) – Explants are disorganised progressively by intense cell proliferation resulting in a compact callus from which,after 35 days of culture were differentiated radicular primordium (Figure 3 ). Culture more than 40 days did not show any other morphogenic response. 6 – DO – Explants are slightly swelling and after 25-30 days of culture,adventitious buds and shoots were developed from meristematic structures (caulinar meristem-like structures) as the result of the mitotic activity of competent epidermal and parenchymatous cells (Figure 4 ). This morphogenic response corresponds to direct organogenesis. 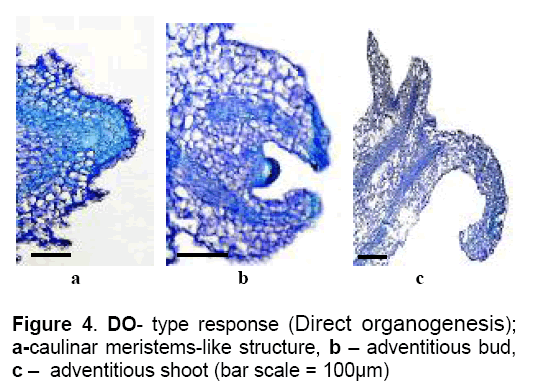 Based on the present results the main factors conditioning somatic morphogenesis in A. borzaeanum are the composition of the culture media,especially the growth regulators and the morphogenic competence of some of the explant cells. The explant response type to culture media hormonal content was summarized in Table 2. 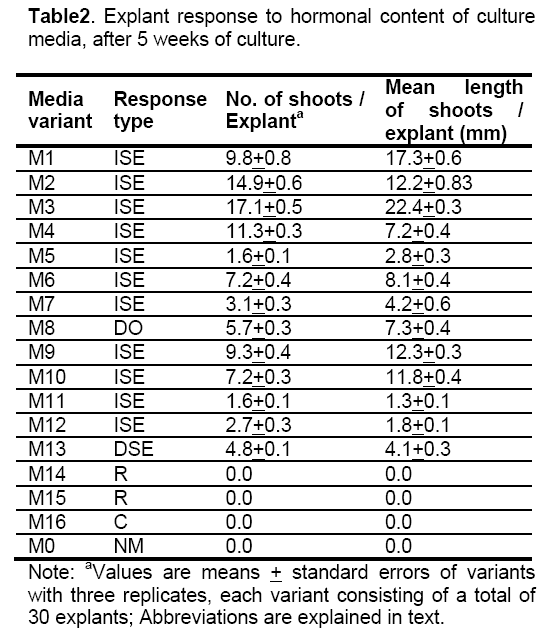 The combined content in both auxins and cytokinins of culture media influenced the morphogenetic competence of the explant cells,the most frequent response being indirect somatic embryogenesis (ISE). Although concentrations of cytokinins less than 5 μM combined with low concentrations of auxins (< 0.5 μM) favoured embryogenic callus development and shoot regeneration,not all the combinations were efficient in high rate shoot production. Low concentrations of some auxins like 2,4D and 2,4,5T,caused inhibition of embryo development and favoured callus formation,showed by the lower shoot regeneration on M5,M6,M11 and M12 media. This results confirm the inhibitory role of 2,4 D upon somatic embryo development previously reported in other brassicas [17]. The most efficient combination with best results in terms of number of shoots per explant (17.1) was 4,43 μM BAP and 0.57 IAA on M3 media. Despite previous findings to other genus of Brassicaceae [18,19,20] BAP was more efficient than Kin and IAA than NAA,respectively,in A. borzaeanum shoot regeneration.

Direct organogenesis was induced on M8 media only,meaning that auxin NOA combined with Kin were simulative to dedifferentiation process of some competent cells of the explant.

Regeneration under single auxin effect (2,4 D) failed,the only response being callus formation (C type response). This type of the explants response confirms the callusogenic effect of 2,4D reported in a number of plant species including brassicas [17,18].

Cultivation on media with dominant auxin and low cytokinin content (M14 and M15) lead to regeneration of roots,rhizogenesis being the only morphogenetic response. Auxins (IAA and NAA) were promoting callogenesis and cytokinins (Kin and BAP) rhizogenesis.

It was also found that basal media without growth regulators (M0) failed to induce any developmental response of the explants,as well as previous reported on Eruca sativa [17] and Camelina sativa [19].

Histological monitoring of the explant response to In vitro culture conditions reveals the morphogenetic pathway and allows an optimal establishment of culture protocol according to a specific purpose. If A. borzaeanum vitroculture system is established for germplasm conservation or for phytoremediation potential investigation,is recommended media formulation which induces shoot regeneration through direct (M8) or indirect pathway (M3,M2 and M4). If the purpose is callogenesis or rhizogenesis for bioactive substances extracts or other purposes,the culture on M14,M15 or M16 media is the most suitable.