Gene therapy is a novel molecular therapeutic strategy to overcome these problems by genetically modifying the graft organ (Figure 1). Lung transplantation provides a unique opportunity for local gene delivery through the airway with limited toxicity to other organs of the recipient. Previous works of us and others have demonstrated that gene therapy is a reliable strategy to prevent primary graft dysfunction in experimental setting,which would encourage surgeons to extend the donor-lung criteria by reducing the risk of this life threatening early complication. Especially,it has been shown that an anti-inflammatory and immunoregulatory cytokine,interleukin-10 (IL-10),is an attractive option. IL-10 gene therapy may also realize local immunosuppression and tolerance induction that might help to prevent chronic graft dysfunction. 2. Gene delivery to the pulmonary graft

Pulmonary grafts are exposed to a series of injuries before,during and after lung transplantation,including donor-associated injuries (for example,trauma,aspiration,infection,prolonged mechanical ventilation),ischemia and reperfusion. Introduction of molecules that reduce pro-inflammatory process or protect cells and organs from injuries may be preventive and/or therapeutic. In order to introduce proteins as a molecular therapy,two options are generally available: recombinant proteins and gene delivery. Recombinant proteins usually have extremely short half-lives (e.g. 1.1-2.6 h for IL-10 in serum [3]). In contrast,therapeutic genes delivered may continuously produce proteins of interest by the protein synthesis machinery in cells,maintaining desired therapeutic level for a prolonged time. The use of recombinant proteins is usually more expensive than gene therapy,and delivery proteins to the targeted cells faces its own technical challenge.

Lung transplantation is an ideal situation for success of gene therapy. Firstly,ischemia-reperfusion injury,a major cause of primary graft failure,is an insult to the transplanted lung that occurs at a predictable time point (i.e. reperfusion). This lends itself to the application of preventive strategies that can be applied before the insult occurs. To prevent ischemia-reperfusion induced injury,only transient expression of the desired protein is required for relatively short but significant period of injury after transplantation. Secondly,steroid treatment for donors and immunosuppression for recipients,which are routinely used in organ transplantation,may help to increase and prolong transgene expression after transfection with adenoviral vectors [4],reduce inflammatory response caused by viral vectors [5] and possibly help to overcome the pre-existing immunity against adenovirus by naturally acquired viral infections [6]. This strategy also permitted effective re-transfection with adenoviral vectors [4,7].

As for administration routes of gene vectors,in vivo normothermic trans-airway administration before organ retrieval has been demonstrated to be superior to in vivo systemic or ex vivo local administration in achieving locally high levels of transgene expression and avoiding unnecessary transfection of other donor organs such as the heart,liver or kidneys [8,9]. As a preclinical study,we successfully delivered human IL-10 adenoviral vectors to pig donor lungs,utilizing the unique anatomical advantage provided by bronchoscopic access [10].

Among several potential vectors,adenovirus vector has been the most effective and appears to be a feasible gene vector in lung transplantation today [11]. Adenoviral vector fulfills the requirement with an ability to achieve high levels of transgene expression for a limited time period [12]. Current state of the art of gene therapy in lung transplantation targeting primary graft dysfunction is summarized in Box 1. However,the early generation of adenoviral vector can be recognized by the immune system,resulting in inflammation and rapid loss of the vector. For other purposes of less side effects and local long-term immunosuppression,gene vectors that can achieve prolonged expression (e.g. lentivirus vector) are highly desirable. 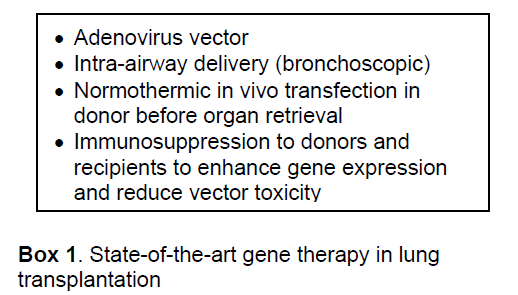 Based on the mechanistic understanding of ischemia-reperfusion injury and primary graft dysfunction in lung transplantation [13],a number of target genes have been tested in lung and other solid organ transplant models,which is discussed in our previous review [11]. Among them,IL-10 is the best tested and most reliable therapeutic gene in lung transplantation (Figure 2 ). IL-10 is a pleiotropic cytokine identified as a cytokine synthesis inhibitory factor and its main function is to limit the inflammatory and immune response [14-16]. IL-10 exerts its anti-inflammatory properties by various mechanisms such as inhibiting nuclear factor κB-mediated gene transcription and production of cytoprotective protein,heme-oxygenase-1 [16]. We have demonstrated the important protective role of IL-10 in ischemia-reperfusion injury after lung transplantation using rat [17] and pig models of lung transplantation [10]

Adenovirus-mediated intra-airway delivery of IL-10 gene to donor lungs 24 hours before harvest significantly improved post-reperfusion lung function and decreased inflammatory cytokines such as tumor necrosis factor-α and interferon-γ. IL-10 gene therapy might attenuate ischemia-reperfusion injury not only by suppressing inflammation but also by changing the mode of cell death from necrosis to apoptosis [18].

Allograft transplantation incites an immune
response to reject the foreign organ. Thus, all transplant recipients need to be placed on long term immunosuppressive therapies. Chronic immuno-suppression subject patient to the complications of the medications and it also leaves them vulnerable to infectious and malignant diseases [20].

Long-term success of lung transplantation is also limited by chronic graft dysfunction manifested by fibrous obliteration of small airways (obliterative bronchiolitis, OB) and its clinical correlate, bronchiolitis obliterans syndrome (BOS) [21]. OB/BOS is the leading cause of morbidity and late mortality after lung transplantation, limiting the 5-year survival to about 50%. By 5 years after transplantation, approximately 50% of recipients develop OB/BOS [20]. Although the etiology of OB/BOS is partly explained by chronic rejection, augmentation of the immunosuppression regimen is generally ineffective and intense immuno-suppression increases the risk of severe infection.

The role of IL-10 is not only suppression of excessive inflammation but also regulation of adaptive immune response (Figure 2). IL-10 downregulates the expression of class II MHC and co-stimulatory molecules on professional antigen presenting cells such as dendritic cells and macrophages [16]. It has been recognized that the regulatory role of dendritic cells over T cells in the absence of inflammatory stimuli in the lung is exerted partially by IL-10, which induces regulatory type T cells such as IL-10 secreting type-1 regulatory T cells (Tr1) [22]. Induction of this immunoregulatory loop of IL-10 by gene therapy in lung transplantation might be a way to realize local immunosuppression or antigen-specific tolerance, which theoretically relieves transplant recipients from life-long immunosuppression and attenuates the chronic rejection in OB/BOS. Indeed, IL-10 gene therapy has been demonstrated to prevent animal models of OB (subcutaneous tracheal transplant models) [23, 24]. This is definitely a promising field requiring future study.

Primary graft dysfunction is a syndrome that
typically occurs within the first 72 hours after lung transplant. Early graft failure after lung transplantation is a life threatening complication and gene modification is a promising strategy to attenuate the problem. Who is most likely to benefit from gene therapy? Currently we are developing diagnostic strategies to select donor lungs based on gene expression analysis [25], which would help us select donor lungs that could be implanted in recipients immediately. Lungs that fall below acceptable criteria of physiological and biological assessment would be the potential candidates for gene therapeutic repair. Theoretically, after procurement, such lungs could be re-evaluated in an ex-vivo circulation apparatus and if required, be repaired by gene therapeutic strategies ex vivo. This has been done to repair kidney grafts [26], and normothermic ex vivo gene therapy in the lung is currently under investigation.

Although adenovirus-mediated gene transfection currently appears to be the most reliable strategy in lung transplantation, innate and adaptive immune responses hinder the efficacy of gene therapy. Hence, we cannot overemphasize the importance of improving vectors to ultimately realize safe and effective gene therapy in lung transplantation. In addition to the improvement of current vectors, novel attractive vector systems are emerging such as sleeping beauty transposon [27] and cell based gene therapy in the lung [28]. Further investigation will be required to examine the safety and efficacy of such novel candidate vector systems in the setting of lung transplantation.

Long-term problems of life long
munosuppression and chronic graft dysfunction might also be solved by gene therapeutic strategy. Studies of this area have been hindered by the lack of reproducible reliable animal models. Although heterotopic subcutaneous tracheal transplantation has been extensively utilized to study the pathophysiology of chronic rejection and OB/BOS, a recognized limitation of the subcutaneous model is the heterotopic localization of the grafts remote from the influences present in the pulmonary environment. The lung is a dynamic organ vulnerable to inflammation and tissue remodeling - as seen in disease states such as asthma, pulmonary fibrosis and emphysema, partly because of its consistent exposure to the external environment (microorganisms and allergens) and its well-developed innate immune system. Hence, it is important to study the pathological remodeling of transplanted airway allografts in the milieu of the lung. A rat intrapulmonary tracheal transplantation model of OB that we have previously described [29] allows for such an approach. Modulation of the local and systemic alloimmune response by local IL-10 gene expression in the lung is currently under investigation.