There are many similarities between Acidthiobacillus ferrooxidans (At.f) and magnetotactic bacteria on physiological properties and growing environment except their trophic types. Magnetosomes can be extracted from At.f by using an improved extracting method of magnetosomes. The membrane of At.f was crushed by ultrasonic wave and the magnetosomes in At.f which mainly contains Fe through chemical detection were attracted by using magnetite. After purified with sucrose density gradient centrifugation and washing by PBS and ethanol, 0.8mg/l magnetosomes were obtained. The magnetosomes were clearly observed under a transmission electron microscope (TEM). The results indicate there are a small amount of intracellular magnetosomess which made At.f weak magnetotactic under the applied magnetic field. At.f can be isolated by using the magnetotactic property for biohydrometallurgy and the high effective At.f strain can be

Since magnetotactic bacteria (MTB) were found by American scientist Blakemore in 1975 for the first time [1],it has been isolated from freshwater pools,the surface of marine sediment and wet grassland soil all over the world with various shapes [2-5]. MTB is several micrometer long,aerobic and with flagellum. The cell wall of MTB is gram negative. The most remarkable characteristic of MTB is that it contains intracellularly synthesized magnetosomes,which are usually made of magnetite (Fe3O4) or greigite (Fe3S4). These so-called magnetosomes are nanometer sized (25-100nm in size),membrane-bound magnetosomes. Under normal temperature,pressure and anaerobic environment,MTB can greatly reproduce in culture medium with Fe3+ in it. This is because that MTB cells are able to respond and orient along the lines of terrestrial or artificial magnetic fields [6-10]. So if we exchange the two-pole of the magnetic field in lab,it will change its’ movement direction [11-13].

MTB can absorb the element of Fe from outer environment to synthesize intracellular nano-sized magnetosomes [14]. The growth environment of Acidthiobacillus ferrooxidans (At.f) contains abundant of the element of Fe and S that is the energy source of it. There are also many similarities between MTB and At.f (Table.1). Therefore,we suppose the growth environment of At.f is benefit to synthesize magnetosomes and At.f may contain some magnetotactic strain. We observed the magnetotactic of At.f and extracted magnetosomes from At.f. The results show that the At.f do contain magnetosomes. It is weak magnetotactic just because the existence of magnetosomes. We isolated the At.f with different magnetic field and research the effect of magnetic field act on At.f. 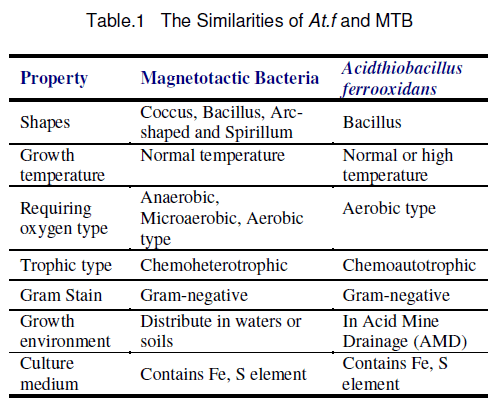 Strain: Isolated from AMD of Yunnan Dongchuan Mine.

2.2.1 Observation of the At.f’s magnetotactic property

The culture of At.f was collected by centrifugation and the iron ion was removed with H2SO4 of pH value 2.0. Then movement of the At.f was observed by using microscope under a magnetic field to determine whether At.f is magnetotactic.

Being suspended in the 10ml PBS buffer liquid,At.f was crashed (600 W/cm2,2.5 mins,30 pluses) by Ultrasonic crasher surrounded with ice. The specimen was alternated freeing and thawing for three times before crushing. Then we used magnetic iron close the bottom of beaker bottom to attract the magnetosomes When the cell wall had been broken up by ultrasonic crasher [15,16],the magnetosomes were cleaned by PBS buffer again and again until no ion of iron inside. It is important that the magnetic iron can't leave the bottom of beaker when pour the liquid. Then 0.5ml PBS buffer was added to suspend the magnetosomes (the raw specimen) in the beaker.

2.2.4 Detection of Fe ion in magnetosomes

We added a few 1mol/l HCl in PBS buffer which suspend the magnetosomes and shaked the beaker lightly to make the compound of iron dissolved. Then added two drops of 0.2% 0.5 ml KSCN in the beaker after the compound of iron dissolved completely with adding two drop of. If the solution’s color turned red,we concluded that the solution contained the ion of iron and At.f contained magnetosomes.

The flowchart of magnetosomes’ extraction from At.f is shown in Figure 1. 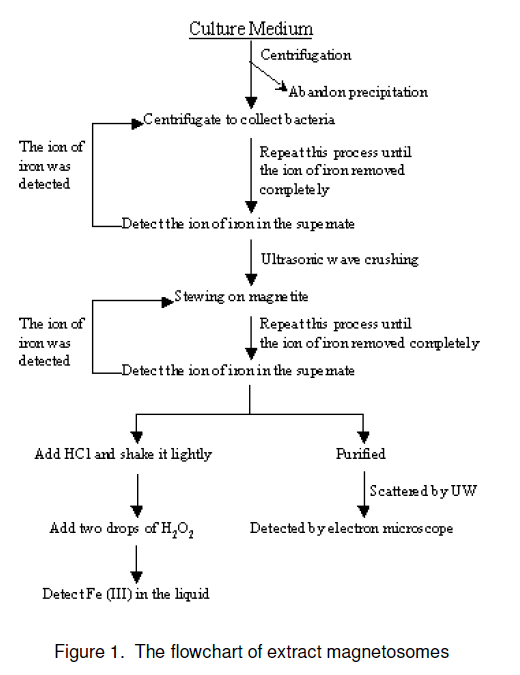 Figure 1. The flowchart of extract magnetosomes

According to the present study,most of the MTB are heterotrophic bacteria and are difficult to culture because it needs anaerobic environment. But At.f are autotrophic,aerobic bacteria and are easy to culture. It is the first time we observe At.f is weak magnetotactic,extracted and detected the intracellular magnetosomes. The experiment results show us the followings:

a. The bacteria which extracellular iron ion was not removed were observed under the magnetic field function by using the microscope,we found the magnetotactic of At.f isn’t very obvious and majority’s movement is irregular. It probablely because that the substance contains Fe which blocks off the movement of At.f or that the material of the weak magnetism synthesized by cell weaken the external magnetic field to influence the cells’ movement. Most of the At.f cleaned by pH2.0 H2SO4 shows magnetotactic obviously. But there still has a few bacteria’s movement is irregular,it may because the number of intracellular magnetosomes is different.

b. The magnetosomes can be extracted from At.f. Just because it contains magnetosomes so that At.f is weak magnetotactic. We can use this magnetotactic to isolate At.f,we can also investigate the growth of At.f under the influence of mineral magnetism.

c. The magnetosome mainly contains Fe element. From Figure 2 we can see the magnetosomes can be aparted to monomer by sucrose density gradient centrifugation and ultrosonic scattering. The results show us that At.f do contain magnetosomes. 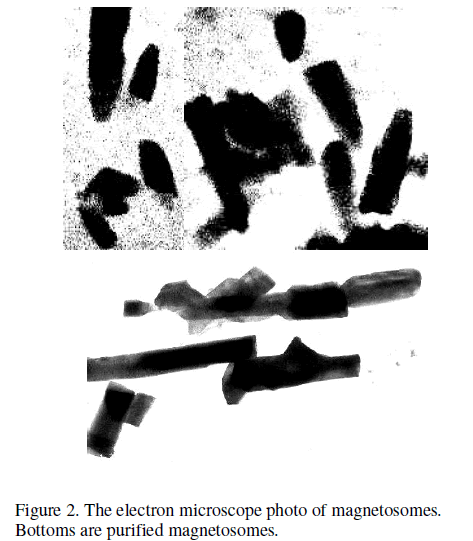