Burn wounds are very common in both developed and developing countries,however,in developing countries burns constitute a major health problem because the incidence of severe complications is high,and financial resources are limited. Burn wound healing is a complex process that does not require much help,but still causes discomfort,and wounds are prone to infection and other complications. Infection is a major complication of burn injury and is responsible for 50-75% of hospital deaths [11]. Many of the synthetic drugs pose problems such as allergy,drug resistance,etc.,forcing scientists to seek alternative drugs [15]. More than 80% of the world’s population depends upon traditional medicines for various skin diseases [2]. Recently,the traditional use of plants for wound healing has received attention by the scientific community [2,8]. Approximately one-third of all traditional medicines in use are for the treatment of wounds and skin disorders,compared to only 1-3% of modern drugs [10].

Several plants used as traditional healing remedies have been reported to treat skin disorders,including burn and cut wounds. In Iran,a survey of the ethnobotanical studies indicated the use of several of plant species by the inhabitants of the area,especially by those habiting the rural areas for wounds healing purpose [6,7,22]. For example,nomadic tribal (Bakhtyari) in southwest Iran,the roots of Arnebia euchroma with goat lipid used as a remedy for burn wounds [6].

Malva sylvestris Linn. (Malvaceae),known locally as “Panirak”,is an important medicinal plants in Iran whose flowers are used as a remedy for cut wound,eczema,dermal infected wounds,bronchitis,digestive problems and inflammatory in Unani medicinal (Iranian Traditional Medicine) literatures [7,22]. A new anthocyanin,malvidin 3-(6″-malonylglucoside)-5-glucoside has been characterized in both wild and cultivated forms of Malva sylvestris [20]. The malvone A (2-methyl-3-methoxy-5,6-dihydroxy-1,4-naphthoquinone) is reported [4,21].

No systematic studies have yet been carried out on the clinical evaluation of the burn wound healing potency of Malva sylvestris and Arnebia euchroma,so these effects were investigated using excision,histopathological characteristics and dead space wound repair models in rats.

The flowers of Malva sylvestris were collected on the slopes of the Zagross Mountains (1700–1800 m),District of Chaharmahal and Bakhtiari,Iran,during May 2007. The roots of Arnebia euchroma collected from the Jahanbin Mountain,Shahrekord,Iran in August 2007. Dr Valiollah Mozaffarian,Researches Institute of Forests and Rangeland,Tehran,Iran,authenticated the plants.

Preparation of the extract

About 100 g of powdered roots of Arnebia euchroma and flowers of Malva sylvestris were extracted with absolute 75% diethyl ether (Merck®) using Soxhlet apparatus for 12 h. The extracts filtered on Whatman paper and lyophilized a residue (yield: 10% w/w).

Male Wistar rats (200-250 g) of 2-3 months were used. The animals were housed in standard environmental conditions of temperature (22 ±3ºC),humidity (60 ±5%) and a 12 h light/dark cycle. During experimental time rats were given standard pellet diet (Pastor Institute,Iran) and water ad libitum. The relative burn wound area was statistically analyzed as mean + S.D and statistically significance between treated and control groups were analyzed by means of Student’s t-test. Data are significant; P-values ≤ 0.05 compared with control by the program “SAS ver 6.12 full”. 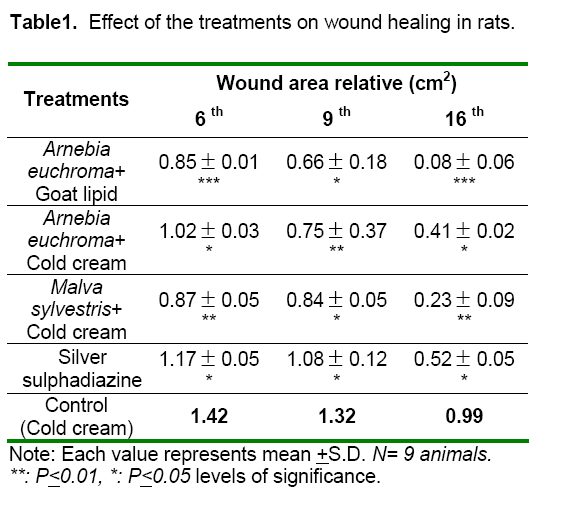 The best results of histhopatologial evaluation were obtained with goat lipid containing of Arnebia euchroma extract and following Malva sylvestris extract,when compared to the other groups as well as to the control and the standard drug (Table 2 & Figure 2 ). These results offer pharmacological evidence on the folkloric use of Arnebia euchroma and Malva sylvestris for burn healing. The study of the histological structure showed the tissue regeneration was grater in the skin wound treated with goat lipid containing of Arnebia euchroma extract (Table 2 & Figure 2 ). The animal treated with cold cream (control) presented edema,monocyte cells and area with cellular necrosis that were not observed in the treated with herbal ointments and standard drug (Table 2 & Figure 2 ). Figure 2: Histological evaluation after 16 days of burn creation in four groups (a, b, c & d).

Burn and wound healing is a process by which damaged tissue is restored as closely as possible to its normal state and wound contraction is the process of shrinkage of the area of the wound. It is mainly dependent upon the type and extent of damage,the general state of health and the ability of the tissue to repair [3]. The wound contraction was significantly faster and higher in percentage in animals treated with goat lipid containing extracts of Arnebia euchroma roots and cold cream containing extracts of Malva sylvestris (Table 1). Finally,the epithelialization time was also found to be shorter in animals treated with goat lipid containing Arnebia euchroma (Table 1). In our study extracts significantly increased the rate of wound contraction and collagen turnover. Collagen,the major component which strengthens and supports extracellular tissue [17].

The roots of some genera of the Boraginaceae family such as Arnebia,Alkanna,Onosma,Lithospermum and Echium species are rich in naphthoquinones. alkannin,shikonin and their derivatives. Alkannin esters showed excellent healing properties in a clinical study conducted on 72 patients suffering from indolent ulcer on the lower part of the leg,due to varicose veins [14]. Accelerative effect of an ether extract of two Boraginaceae species Lithospermum erythrorhizon roots and Macrotomia euchroma roots on the proliferation of granuloma tissue in rats has been demonstrated [12,13]. They suggested that the accelerative effect of the roots on the proliferation of granuloma tissue depended mostly on the total content of naphthoquinone derivatives and the accelerative effect induced by ether extract might be an additive effect of these naphthoquinone derivatives. According previous studied [19] related that naphthoquinone derivative,arnebin-1 (b,b-dimethylacrylalkannin),significantly accelerated wound healing with or without hydrocortisone treatment [19]. Akkol et al. (2009) showed that,the treatment with arnebin-1 showed reduction in the wound width and gap length compared with controls,moreover,promoted cell proliferation,migration and vessel formation to form a thick granulation tissue and re-epithelization of the wounds. Shikonin derivatives isolated from the roots of Arnebia euchroma have been reported by Kim et al. (2001) reduced to shikonin semiquinone radical by O2 and these scavenging activities may play an important role in the wound healing enhancement of the plant extract [16].

Any one of the phytochemical constituents (malvone A: 2-methyl-3-methoxy-5,6-dihydroxy-1,4-naphthoquinone) present in Malva sylvestris may be responsible for antimicrobial activity [5]. It may be either due to the individual or additive effect of the phyto-constituents that hastens the process of wound healing.

This work was supported by IAUSHK (Researches Affairs). The authors are thankful to Mr. F. Fadi Fard,Ph.D and Mr. M. Farid,Ph.D (Surgical) for their technical support.