Kermanian thyme (Thymus caramanicus Jalas.) belongs to Lamiaceae family and widely used in pharmacy, cosmetics and Food industries of developed countries; it is a strong disinfectant with antioxidant. In order to determine the effects of phenological stages on herbage yield and quality/quantity of oil in Kermanian thyme, this study was conducted in research farm of Khorasgan (Isfahan) branch of Islamic Azad University in 2009-2010 years using a randomized complete blocks design with three replications. Plants were harvested in five phenological stages, i.e. in the vegetative stage, beginning of blooming, 50% blooming, full blooming and fruit set stages. Oils were extracted by hydrodistillation for 3 h, of the aerial parts using Clevenger-type apparatus. Thymol percentage was determined by GC/MS. Results showed the significant effects of phenological stages on fresh and dry herbage yield, essence and thymol yield and percentage. Mean comparison showed that 50% blooming has the highest essence percentage (1.45%). According to GC/MS analysis, thymol was the main compound of oil in all-phenological stages. The highest essence and thymol yields were obtained from fruit set stage. Therefore, it is recommended to harvest this plant in fruit set stage to gain the highest essence and thymol yield as well as fresh and dry herbage

Kermanian thyme (Thymus caramanicus Jalas.) is belonged to mint family (Lamiaceae). The origin of this plant is Kerman and Zagross mountain region,center of Iran (Kerman province). Kermanian thyme has a wooden plant,perennial and Grey colored with C3 metabolism system,that will be 25-50 cm tall depending the climate of growth region and soil quality [1]. At present time,this plant is cultivated in medium scale in Iran,showing antibacterial,antimycotic,antioxidative,natural food preservative,and mammalian age delaying properties [2,3] The biosynthesis of secondary metabolites,although controlled genetically,is affected strongly by environmental influences. Agricultural factors have a critical effect on quantitative and qualitative characteristics of thyme,which finally result in plant growth and yield increment. The phenological stages can be very effective factor in this area [4,5].

In Sefidkon F et al [6] study about effects of harvest stages and various methods of hydrodistillation on essence efficiency of garden thyme,phenological stages had significant effect on essence efficiency. Mean comparison results showed that the highest efficiency belonged to beginning of blooming (1.18%) and vegetative phase had the lowest (0.86 %). Also some studies showed that the highest herbage yield and essence of garden thyme were obtained in lower elevations and in full blooming stage [7]. Khorshidi J et al [8] investigated four various stages in two region to assess the effect of climate and phenological stages on essence percentage of Denaian thyme (Thymus daenensis Celak.). Results showed higher essence percentage in full blooming and fruit set stages under both circumstances.

Therefore,this study was achieved to assess the effect of phenological stages on herbage yield and quality/quantity of oil as well as to determine the best harvesting time in Kermanian thyme (Thymus caramanicus Jalas.)

The study was conducted in research farm of Khorasgan (Isfahan) branch,Islamic Azad University in 2009-2010 years using a randomized complete blocks design with three replications. Phenological stages (harvesting times) i.e. (1) the vegetative stage,(2) beginning of blooming,(3) 50% blooming,(4) full blooming and (5) fruit set stages were considered as treatments. Seeds of Kermanian thyme (Thymus caramanicus Jalas.) were sown in green house at 2010 January. Small seeds were mixed with gravel to facility and uniformity in sowing (one part seeds plus two part gravel). Seeds were sown in 0.5 cm depth. The amount of used seeds was 0.8 to 1 gram per square meter. There was no disease during growth in green house. Seedlings transplanting was done at March 2010.

The research farm is located in east of Isfahan (32° 38'N 51°47'E) with 1550 m elevation. Region climate was dry or cold dry according to Demartin and ambergay methods,respectively. Mean annual precipitation is 114.5 mm and mean temperature of region is 15.1°c. Maximum temperature in July was 42.6 °c and minimum in Jan uary was 17.2°c5. Rooted cuttings were planted in experimental units consist of four rows of 3m length. Distances about 0.5 m and 0.2 m were considered between rows and within rows,respectively. Irrigation was done every 4-6 days using furrow method.

Oils were extracted by hydrodistillation for 3 h,of the aerial parts using Clevenger-type apparatus. The oils were dried over anhydrous sodium sulphate and kept at − 4 ° C until it was analyzed [9]. Qualitative and quantitative analyses of oils were performed by Shimadzu gas chromatography model 15A,equipped with a FID detector and fused silica capillary column (OV-101,25m × 0.2 mm). GC analytical conditions were: injector temperature: 230 ° C,oven temperature: 175 ° C (isothermal),and detector temperature: 230 ° C. The percentage of the thymol and carvacrol were computed from GC (FID) peak areas with using the area normalization method [10].

Analysis of variance of data was done based on randomized complete blocks design model. Means of phenological stages were compared using Duncan's new multiple range test (DNMRT) at 5% probability level. SPSS16 program was used to statistical analysis. The graphs were drawn by Excel2007.

Analysis of variance (Table 1) showed the significant effect of phenological stages (treatments) on all the measured traits. Naghdibadi H et al [11] found that various stages of growth had significant effect on wet weight. In this study,mean comparison results showed the highest wet weight (17.70 ton/ha) was obtained in flowering initiation whereas full flowering had the lowest (15.56 ton/ha). Khorshidi J et al [8] showed that various phenological stages have significant effect on dry biomass weight and the highest dry matter was obtained in fruit set stage,which is agreement with the results of present study.

Studying the ascending trend of fresh herbage (Figure 1) and dry herbage (Figure 2 ) changes showed that fresh herbage had an obvious increasing from vegetative phase to fruit set stage that plus the length of plant growth it could be because of shiny days with high temperatures,specifically in July and August because days are longer in this period and then radiation is more [5,6,12]. 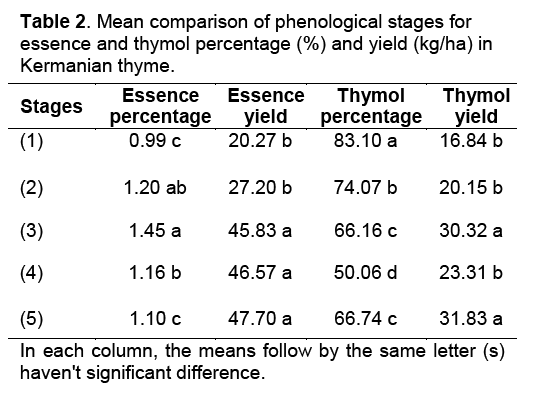 Naghdibadi H et al [11] showed that different phenological stages didn't affect essence yield but significantly affected essence percentage in Garden thyme. Results of mean comparison designated that in Garden thyme the highest (115 kg/ha) and lowest (101.8 kg/ha) essence yield were resulted in beginning of blooming and fruit set stages,respectively. The highest essence percentage (20.8%) belonged to beginning of blooming whereas full blooming stage had the lowest (1.8%). Mirahmadi F et al [13] compared the essence quality of Thymus fedtschenkoi in various phenological stages and showed that the highest amount of linalool was obtained from full blooming stage (83.14%). Nejad-Ebrahimi et al [1] in study of Kermanian thyme (Thymus caramanicus Jalas.) observed that the lowest essence was obtained in vegetative phase. Evaluation of the variations happened in essence percentage revealed that this plant has less essence in vegetative phase (Table 2) but after transition to fruit set stage will have obvious increase in essence amount that can be because of different external/internal factors. This phenomenon is not only important for essence amount but also is interesting from other aspects like changes in amount of some of its components. Environmental factors like temperature,humidity,light,location,soil and … are important but this is essential to know that clearing up effects of environment will not reduce the role of genetic factors which may be themselves affected by environment [7,14].

Changes regime of thymol percentage designated that this plant had the highest thymol in vegetative phase but with passing vegetative phase and entrance to full blooming stage,an obvious reduction in thymol percentage occurred. Then in fruit set stage,thymol percentage increased (Table 2) that its reason could be various environmental and genetic factors. Jordan M J et al [15] in research of various phenological stages effects on essence quality and quantity of Himalayan thyme (Thymus hyemalis Lange.) observed that the highest density of gamma-terpinene (starter of p-cymene synthesis) was related to full flowering but the highest densities of thymol and carvacrol were obtained from full flowering and start of fruit ripening. The highest densities of alcohols,Ketons and steres were obtained in vegetative phase. Sefidkon F et al [6] observed that thymol amount was increased gradually in Garden thyme from the first of vegetative phase to full flowering,which is in agreement with findings of present study. Essence quantitative results studying (efficiency relative to dry matter) showed that to reach the highest amount of essence in Kermanian thyme it is better to harvest in 50% blooming phase,but for obtaining the highest essence and thymol yield (Table 2) as well as fresh (Figure 1) and dry herbage (Figure 2 ),harvesting in fruit set stage is better than other phenological stages.

In conclusion,research about aromatic and medicinal plants which are native of Iran,especially frequently used plants like Kermanian thyme and evaluating qualitative and quantitative yield of essence and chemical compounds of these species on farm situation is necessary. Planting a medicinal plant will be economical if its secondary metabolites production were in a favorable amount. Considering the daily increasing in thyme use for Pharmacia industries and high request for scientific production,it is recommended to harvest this plant in fruit set stage to obtain the highest amount of essence and thymol yield as well as fresh and dry herbage.