Two field experiments were conducted during growing season of 2011-2012 at two locations, 1. Seed and Plant Certification and Registration Research Institute (SPCRI), Karaj-Iran 2. Agricultural and Natural Resources Research Center, Yazd-Iran, to study dry matter accumulation and remobilization in grain wheat (Triticum aestivum L.) cultivars under drought stress and potassium foliar application treatments. The experiment was carried out using a split plot factorial based on a randomized complete blocks design with three replications. The experimental treatments included three irrigation regimes; normal, mild stress (water withhold at the seed filling phase) and severe stress (water withhold at the ear emergence phase); potassium foliar treatments included, 0, 1.5% and 3.0% K2O applications and three wheat cultivars (Marvdasht, Pishtaz and WS-82-9). The amount of remobilized dry matter (ARDM), remobilization efficiency (REE), remobilization percentage (REP) and grain yield were measured. The results showed that water stress significantly increased amounts of remobilized dry matter, remobilization efficiency and remobilization percentage compared with normal condition in both locations. However it significantly decreased grain yield. Foliar application of potassium at the rate of 3.0% K2O gave the highest values of all studied wheat characters followed by 1.5% K2O as compared with control treatment in both locations. Marvdasht cultivar had the lowest values of the above mentioned characters as compared with the two other cultivars.

Wheat is one of the main cereal crops,cultivated to meet great demands of the population for human feeding. It is the most important staple for bread flour in Iran [22]. The greatest fear of global climatic change is drought and among the environmental stresses,drought is one of the most severe stresses for plant growth and productivity [12]. Although,drought can affect all growth stages of wheat plant,seed filling is considered to be one of the most sensitive growth stages to water deficit stress [9]. Current photosynthesis as an important carbon source for grain filling is dependent on the effective light absorption by the green area of the plant after pollination stage. At the same time,demands for photosynthesis material for grain filling and for keeping respiration for live plant biomass increase [7]. In most studies on the small grain cereals,it was determined that stems and leaf sheaths contained most of the stored assimilates [13,28,31,33]. Papakosta and Gagianas [24] reported that stem reserves are important source of carbon for grain filling during terminal drought and remobilization percentage was 6 to %73 in bread wheat. During grain filling,occurrence of different biotic and abiotic stress factors such as water deficit decreases current photosynthesis [5]. Under this condition demand rate for utilization of the stem accumulation increases and remobilization of stem reserves is an important supporting process that can largely compensate grain yield decrease [23]. With increased drought stress greater remobilized dry matter,remobilization efficiency and remobilization percentage were determined in sorghum and wheat [6,17]. The response of a plant to environmental stress is determined by its nutritional status. One of the mechanisms for improving plant tolerance to drought is to apply K which seems to have a beneficial effect in overcoming soil moisture stress [20,27]. Increased application of K has been shown to enhance photosynthetic rate,plant growth and yield in different crops under water stress conditions [14,30]. Spraying wheat plants with K before subjecting the plants to drought treatment diminished the negative effects of drought on growth and in turn increases yield per plant [15].

The objective of this study was to find out the effects of drought stress and potassium foliar application on some physiological parameters such as amount of remobilized dry matter,remobilization efficiency and remobilization percentage and grain yield of three wheat cultivars.

Two field experiments were conducted in 2011- 2012 at two locations: 1- Seed and Plant Certification and Registration Research Institute (SPCRI),Karaj-Iran,2- Agricultural and Natural Resources Research Center,Yazd-Iran. Chemical and physical traits of experimental soil at both regions is representing in Table 1.

The experiment was carried out using a split plot factorial based on a randomized complete blocks design with three replications. Three irrigation regimes,control (normal irrigation),mild stress (water withhold at the seed filling phase) and severe stress (water withhold at the ear emergence phase),potassium foliar application,without foliar application (K0),1.5% K2O (K1) and 3.0% K2O (K2) and three wheat cultivars (Marvdasht,Pishtaz and WS-82-9) comprised the experimental factors. The amount of remobilized dry matter (ARDM),remobilization efficiency (REE),remobilization percentage (REP) and grain yield were measured. Seeds were sown on 15 and 19 November at Yazd and Karaj,respectively. Sowing density was 400 seeds m-2 by planting 500 seeds on each row. Plots were 5 m long and 2 m wide,with eight rows 0.25 m apart. All plants received irrigation until the imposition of treatments. Drought treatments imposed by withholding irrigation after ear emergence and seed filling phases. Plastic cover was used to prevent of effective rainfall on plots under drought water stress. Urea,potassium sulphate and super phosphate were applied according to results of soil analysis. All plots received one-third of urea and all super-phosphate at sowing. Other two-third of urea was applied at the start of stem elongation,and before flowering,respectively. Plots for potassium foliar application treatments were assigned to three levels of treatments i.e. control treatment (without spraying),1.5 and 3.0% K2O in the form of potassium sulphate (48% K2O). The foliar solution was prepared at both rates and applied using hand sprayer at steam elongation stage. In order to study the rate of remobilization of assimilates the dry weight of 20 randomly selected plants from each plot at the stages of anthesis and physiological maturity was obtained. Then the amount of remobilized dry matter (ARDM),remobilization efficiency (REE) and remobilization percentage (REP) were determined using the following equations [4,10,24].

REP is remobilization percentage (%); and GY is grain yield (g/plant).

The final harvest was done in a plot area of 3 m2 from the center of each plot for measuring grain yield.

Analysis of variance was carried out using SAS software. Treatment means were compared using Duncan's test at the 5% and 1% levels of significance and graph drawing was performed by means of Excel 2003 software. Bartlett test was used to test homogeneity of variances.

The results obtained from combined analysis of variance across two locations revealed significant difference (P<0.01) among different levels of drought stress,potassium foliar application,cultivars and their interactions (Table 2). Results indicated that drought stress significantly affected on amount of remobilized dry matter (Table 2). Remobilized dry matter was 0.63 and 1.30 g/plant in normal and severe water stress treatments,respectively (Figure 1). Mir taheri et al.,[21] in similar study on wheat reported that remobilized dry matter of drought stress treatment was %25 greater than control. These results are in line with those stated by Farhangi and Ghodsi [17],Davidson and Chevalier [11] and Yang et al. [31]. 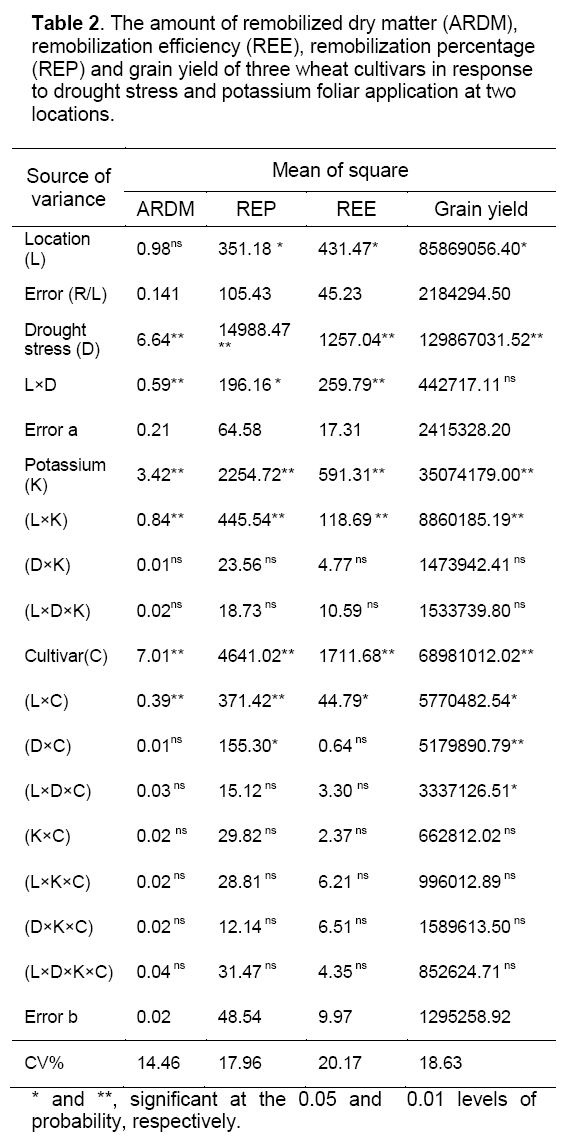 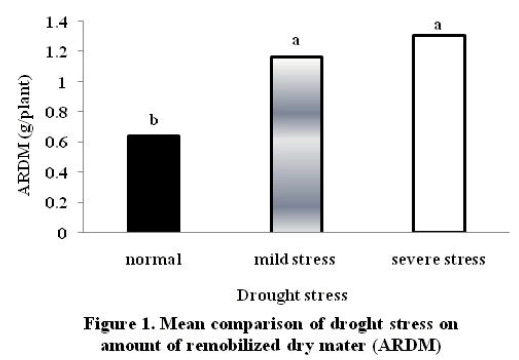 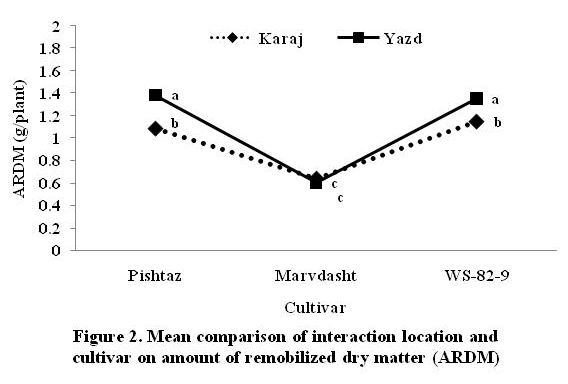 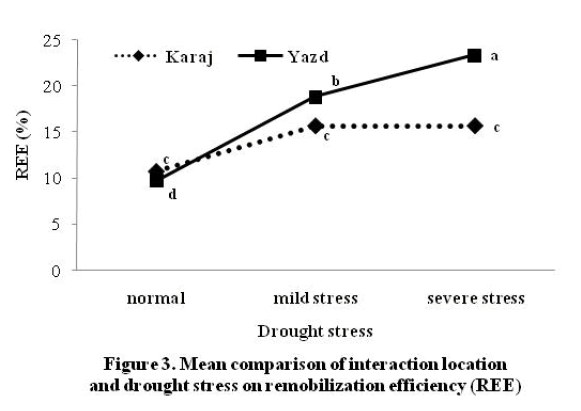 Potassium foliar application significantly increased remobilized dry matter and remobilization percentage at both locations. Results showed that the efficiency of potassium fertilizer at Yazd was much more than Karaj. For example,differences between remobilized dry matter in highest level and no potassium application at Yazd was 0.22 g/plant more than Karaj. Also,high and low values of remobilization percentage were attained with spraying 3.0% K2O (%46.3) and no potassium application (%30.57) at Yazd,respectively (Figure 4 ,5). These increases may be ascribed to the role of potassium on increasing photosynthetic activity which accounts much for high translocation of photoassimilates from leaves to the grains. Numerous studies have shown that the application of potassium fertilizer mitigates the adverse effects of drought on plant growth in barley,sunflower,faba beans,sugar cane and rice that confirmed result of this study [1,3,19,27,29]. 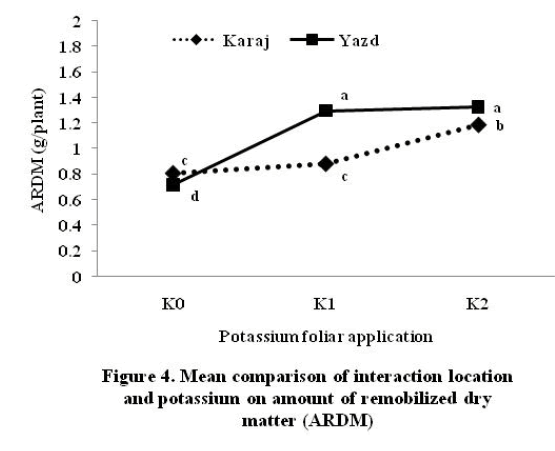 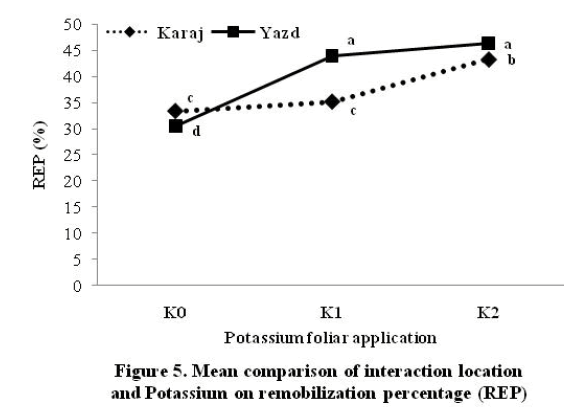 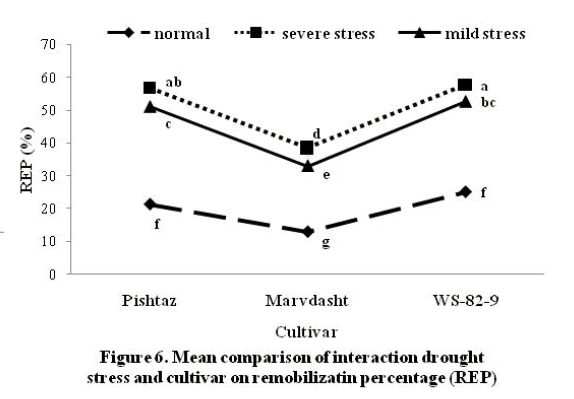 Interaction effects of location and drought stress and cultivar was significant on grain yield (Table 2). Results showed that reaction of cultivars under drought stress conditions at both locations was different. By increasing drought stress the reduction of grain yield was approximately similar in three wheat cultivars at Karaj,while under severe stress at Yazd,yield decrease with WS-82-9 than Marvdasht was least that can be associated to its physiological characteristics. The highest value of grain yield was produced with WS-82-9 under normal water use at Karaj (9310 kg ha-1),while the lowest value of grain yield was observed in Marvdasht cultivar under severe drought stress at Yazd (2220 kg ha-1) (Figure 7 ). This effect of water stress during grain filling on grain yield may be due to the reduction in rate and duration of filling processes and causing small grain size consequently reducing yield components (number of spikes per m2,number of grains per spike and 1000-grain weight). Similar results were detected by Pierre et al.,[25]. 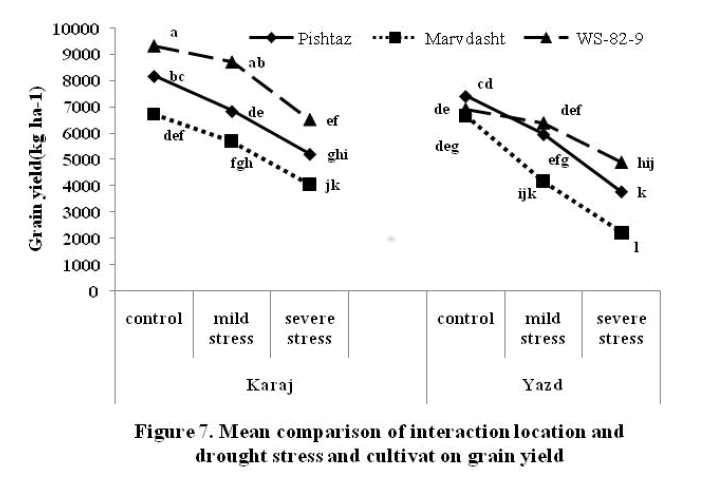 Potassium foliar application significantly increased grain yield at both locations. Results showed that the efficiency of potassium fertilizer at Yazd was much more than Karaj. For example,differences between grain yield in highest level and no potassium application at Yazd was 1616 kg ha-1 more than Karaj (Figure 8 ). Improvement in grain yield due to potassium foliar application may be ascribed to the role of potassium in improving many physiological growth processes and delay plant leaves senescence as well as increasing photosynthetic activity. These results are in line with those stated by Abou El-Defan et al. [2] and El-Sabbagh et al. [16]. 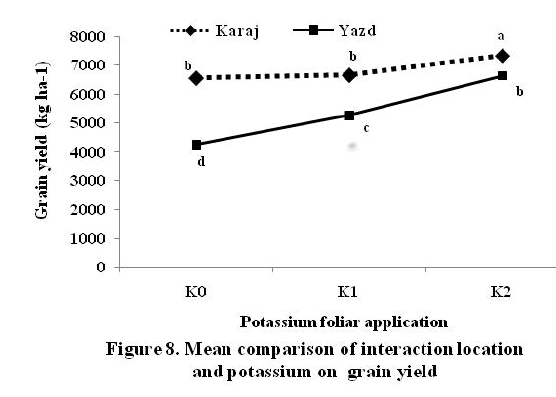 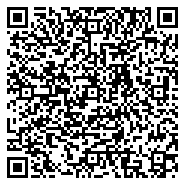