Smoking is predisposed by social, environmental and genetic factors including variation in CYP2A6, CYP2D and CYP2B6, which encode nicotine and codeine metabolizing enzymes. In early adolescence, CYP2A6-induced slow nicotine metabolism was related with higher dependence and reduced cigarette consumption. Our commentary has fully extended prior work illustrating that slow nicotine metabolism mediated by CYP2A6, CYP2D and possibly CYP2B6, risk for tobacco addiction during adolescence. Inherited differences in the rate of nicotine and codeine elimination may induce neural responses. Thus smoking signals during early selfdiscipline can provide an understanding of possible mechanism involved for differences in smoking behaviors and response to cessation treatment. The levels and tissue distribution of codeine, codeine-6- glucuronide (C6G), norcodeine, morphine and the morphine metabolites like morphine-3-glucuronide (M3G) and morphine-6-glucuronide (M6G) are present in blood, liver and brain. CYP2D6 and CYP2D genotypes in brain have not just laid a passive target role with receptor for drugs, pollutants, pesticides but also acted as active metabolizers.

Tobacco leaf contains various alkaloids and the most abundant one is codeine. Other alkaloids present in tobacco are nicotine, anabaseine, myosmine, β-nicotyrine, cotinine, 2,3-bipyridyl, anatabine, anabasine, nor-nicotine, heavy metals, N-methylanabasine, and nicotine N-oxide. According to data of IARC [1] and Counts et al. [2] that the nicotine concentration in the commercial available tobacco products ranges from 6 to 18 mg/g. This is too high concentration of nicotine in tobacco. In the tobacco, nicotine is found in three forms; non-protonated (free base), mono-protonated and diprotonated form.

It has been reported previously that almost, 90% of the chain-smokers start smoking in the teenage [3]. A significant ratio of 40-75% of smoking activities is affected by genetic transfer and social interaction [4,5]. Genetic alteration alters the metabolism leading to a subsequent clearance of nicotine. In addition, individuals with less smoking routine have slower rate of metabolism of blood and tissues as compared to chronic smokers. The primary metabolism of nicotine occur in the liver by CYP2A6 and converted into cotinine and then to 3-hydroxycotinine (3- HC) by the same enzyme. The formation of 3-HC and cotinine ratio provides a reliable and constant quantity for nicotine metabolism. As the normal nicotine metabolite ratio is 7-10 [6,7].

Traditionally, tobacco has been consumed as part of culture in some countries of the world. Betel quid, areca nuts, and slaked lime used in smokeless products and electronic smoking cigarette are the prominent products of nicotine and codeine source. Approximately, 10% of the nicotine to cotinine conversion occurs via a cytochrome P450 (CYP) enzyme [8]. In the adolescent chain smokers, CYP2B6*6 allele form was linked to minor selfdiscipline rates in the placebo arm of a bupropion smoking termination clinical trial; 15% of persons with one or two copies CYP2B6*6 accomplished self-discipline [9]. In another study, the CYP2B6*6 allele was additional common in nicotine dependent individuals associated with those that are not dependent [10]. Furthermore, CYP2B6*6 also affect the risk of inquisitive nicotine in teenagers, which increase codeine analgesia. The main aim of the present commentary is to highlight that cigarette smoking may lead to codeine addiction in brain, which also centrally activates codeine to morphine.

The studies of near past identified that codeine is only metabolized in the liver by enzyme CYP2B, but new research investigated that it also takes place within the brain itself. The chronic chain smokers or codeine users triggered the quantity of an enzyme CYP2D that converts 0-15% of codeine to morphine in the brain helping in pain subsiding/ analgesia [11] (Figure 1). The daily smoker’s habits make people more prone to addiction as faster the drug administered in high amount; these make researchers to learn the behavior and addiction to particular substance. More precisely, this is the pharmacokinetics communication due to inhibition of the hepatic O-demethylation of codeine to morphine because of takeover of the CYP2D6 system due to use of fluoxetine. Codeine has slight affinity for the μ-receptor and is considered as prodrug that must be metabolized into morphine for its analgesic properties. Approximately, 90% of the codeine undergoes either glucuronidation to form C6G or N-demethylation to yield norcodeine. The end products are then eliminated [12]. The latter pathway is mediated by CYP2D6 and is thought to be responsible for analgesic effects of codeine. Through, glucoronidated morphine produces 5-10% M6G, 60% M3G and 30-35% nor-morphine by N-demethylation to yield norcodeine-6-glucuronide shown in Figure 1 [12]. 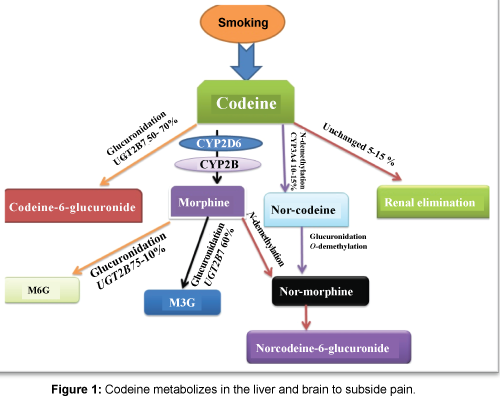 Figure 1: Codeine metabolizes in the liver and brain to subside pain.

Brain play important role in the metabolism of different toxins and drugs. Previous studies investigated that brain plays passive target role with receptor slowly waiting for drug. In the new study, Tyndale and his coauthors revealed that the brain actually plays much more active role towards target receptors. The specific enzymes CYP2D in the brain are actively involved in ramping up or breaking down of drugs, toxins and other substances. So understanding of enzymes like CYP2D and other genetic makeup disturbs the brain breakdown [11]. This also elucidated why individuals respond differently to drugs, toxins and even some individuals are extra vulnerable to complex disease like schizophrenia, multiple sclerosis and Parkinson’s disease.

The findings of aforementioned work also elucidated a lot of ambiguities that why individuals react differently to drugs, toxins, pesticides and other substances even when their blood parameters appear to be related. So, the understanding of the smoking effect on the brain metabolizing enzymes like CYP2D might be a great influence on the clinical and medical practice. The researchers and clinicians confused how drug react in different ways in individuals. For example, certain individuals do not have metabolizing enzyme to change codeine to morphine. So for this scenario people are abusing such medicines and when it’s not working then go for more to get pain relief, pleasure and relief anxiety. The drugs, toxins and other harmful compounds are metabolized in the brain. Studies suggest that chain smokers have lower risk of developing Parkinson’s disease as compared to non-smokers. Researchers also investigated that CYP2D is responsible for conversion of codeine to morphine that is liable to breakdown toxins and causes symptoms of Parkinson disease. In actual the exact mechanism needs more study.

The genetic variation of CYP2D that secured nicotine addiction did not change nicotine level in blood. The variation in the action inside the brain due to another enzyme like CYP2B certainly leads to alteration in brain nicotine levels of animal models [13]. As understood in humans, low level of CYP2D enzyme in the brain having additional active nicotine and are at high risk to nicotine addiction. As this enzyme also play important role to change common pesticide and herbicide used in agriculture into their corresponding toxicants. This is the new area for the researchers to investigate the possible distinction in their response to drugs, toxins acting on the brain and source of variation. Researchers also initiate to investigate the patterns and association of codeine and nicotine linkage. This new attempt will also open the door in drug advancement when stimulated and reached to destination of brain. So this variation in the levels of morphine and pain relief in the brain, the level continued the same in the blood of different groups. This showed that there was variation in the action of CYP2D within the brain and not in the liver and firm the effect of codeine on pain relief [11]. In addition, smoking, nicotine use, environment and genetic makeup could be getting more analgesic and having more enzymes in the brain to convert codeine to morphine. But these individuals might be at great risk of codeine dependency. Beside aforementioned cigarette dependency, plant-derived medicines such as psoralidin from Psoralea corylifolia modulate the hypothalamic-pituitary-adrenal axis. The total glycosides illustrate inhibitory effects on both subtype of monoamine oxidase and cytoprotective role in neural cells which are used in depression and analgesia [14].

So it is concluded that brain not just laid a passive target role with receptor for drugs, toxins, herbicides but also as an active metabolizers. The smokers are at high risk to nicotine, codeine and morphine addiction. So instead of tobacco smoking, oxycodone is an important alternative, as per previously available studies, limited data related to codeine and other opioids exists, which present specific type of treatment for analgesia by targeting enzymatic degradation in brain. This area needs more research with special reference to variation in human brain enzymatic activities using a variety of humanized experimental models, quantitative system psychopharmacology and clinical trials.

The authors declare that they have no conflict of interest.

This paper is the outcome of an in-house financially non-supported study. All authors have read and approved final version of the manuscript. Authors wish to thank Iran National Science Foundation.