The in vitro measurement of glucose is of great importance in clinical diagnosis of diabetes mellitus. Purification and Immobilization carried out for the localization of biosynthesized enzyme with retention of its activity, stabilization, improvement of enzyme performance and continuous use of enzyme in several reactions. Glucose oxidase was produced from corn steep liquor as substrate and Aspergillus niger as organism, afterwards purification was conceded by ammonium sulphate precipitation, ion exchange chromatography and gel filtration chromatographic techniques. The specific activity of crude and desalted enzyme was found 3.45 U.mg-1 and 16.52 U.mg-1 respectively. For further purification, sample subjected to ion exchange chromatography and gel filtration chromatography to achieve 37.04 U.mg-1 and 58.45 U mg-1 specific activities. Purified glucose oxidase had been used to immobilize on a solid support for the determination of glucose levels and compared with the commercially available kit. The glucose level detected from the AMP kit showed 98.09 mg/dL while the result obtained from the self-fabricated biosensor was 85.50 mg/dL. In comparison, the fabricated kit provided close results to the commercially available kit that urged us for clinical trials.

The most regular commercialized biosensors resting on enzyme activated support are engaged for detection of blood sugar; they support diabetes mellitus patients to screen their day-to-day sugar levels [1-3]. The distinctive proposal for a biosensor comprises a permutation of transducers (electrodes) along with biological components [4] employed to categorize the target molecules in the existence of assorted chemicals. Glucose oxidase (GOD) is the mainly regular enzyme utilized as the biological entity within glucose biosensors [5]. Conversely, it has one obstacle: enzymatic reaction depends robustly on the concentration of dissolved oxygen like an electron acceptor. In disparity, the enzymatic reaction of glucose dehydrogenase (GDH) is independent of the dissolved oxygen [6-8].

Worldwide diabetes is a prevalent vigor issue also one of the prime explanation of death in addition to disability among developing countries specially. The uncovering along with supervision of diabetes mellitus needs a solid scrutiny of blood glucose levels [9]. The examination of such dense and also constant glycemic control indication subject of extent amounts of investigations [10]. There are various tests to be had for the identification of diabetes, though for the supervision of diabetes selfmonitoring of blood glucose (SMBG) has been an indomitable tool [11]. The idea of SMBG is to relieve the patient in accomplishing along with adaptable normal blood glucose concentrations in revere to holdup or even prevent the amelioration of microvascular (retinopathy, nephropathy and neuropathy), furthermore macro-vascular inhibitions consisting stroke with coronary artery disease [12]. Standard results of blood glucose may perhaps exhibit facts for optimizing and varying patient handling methodologies along with biosensors pro glucose that reveal foremost function in this method [13].

Electrochemical sensors can be categorized into potentiometric, amperometric, or else conductometric kinds. The majority pervasive devices commercially accessible are enzymatic amperometric glucose biosensors moreover have been largely probed over the preceding few decades [14].

Generally, glucose results are calculated on synergy among one of three enzymes i.e., hexokinase, glucose oxidase (GOx) or else glucose-1- dehydrogenase (GDH). Glucose biosensors are frequently premeditated on GOx or GDH exploited for SMBG as well as they diverge in redox potentials, cofactors, turnover rate with selectivity pro glucose [15,16].

The wide-ranging utilization for glucose sensing is of divergent category which exploit immobilized glucose oxidase enzyme [17]. The aim of the proposed research project is an effort to prepare enzyme activated solid support for glucose level estimation along that developments of glucose biosensor.

The structure of an enzyme activated support for the determination of glucose via the technique of immobilization exploiting the fermentation biotechnology; glucose oxidase was generated, utilizing corn steep liquor as a substrate [18]. The pure culture of A. niger and Vogel sporulation media was acquired from Enzyme Biotechnology Laboratory at the Department of Biochemistry, University of Agriculture, Faisalabad. Briefly, A. niger spores were cultivated in 100 mL of Vogel media adjusted at 5.50 pH. Subsequent to progression up to 36 hours for A. niger, the mycelia were perturbed in a homogenizer for 10 min as well as substantial suspension were subjected to centrifugation at 10,000 rpm for 15 min and 4ºC in an array to dislocate the cell membranes. Intracellular glucose oxidase along with peroxidase activity was ascertained via enzyme assay [19,20] as well as protein estimation through the Biuret scheme [21] (Figure 1). 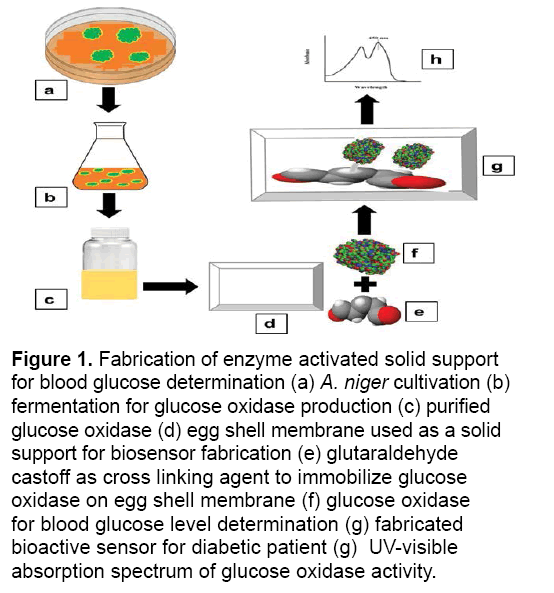 Glucose oxidase production via fermentation process exploiting A. niger as fermentative entity, moreover purification through ammonium sulfate precipitation, ion exchange and gel filtration chromatography was carried out by the previously developed methodology of Sukhacheva et al. [22]. Briefly, Crude enzyme was subjected to ammonium sulfate precipitation and afterwards dialysis to remove the salt components. The desalted enzyme was decanted on the plane of DEAE-(diethyl amino ethyl) cellulose column (2×14 cm). The elution of sample was conceded out along with 0.1 M phosphate buffer (pH 6.0). The enzyme activity and protein contents of collected enzyme were measured. Further purification of partially purified enzyme was carried out through gel filtration chromatography by using column of Sephadex G-100 (2×12 cm). A total 30 fractions of 2 mL each were collected and subjected to enzyme assay and protein contents determination using the formerly described methodology Zia et al. [18].

Enzyme activated solid support was fabricated by the developed methodology of Pundir et al. [23]. In brief, an egg-shell membrane was vigilantly obtained from an egg engrossed in 150 mL of 3 M HCl solution and it was unwrapped from fragmented egg-shell after the yolk and albumen removal present inside the shell. To immobilize the glucose oxidase enzyme, the obtained membrane was washed with water and placed on an antiseptic glass plate and cut into circular shape with 1.5 cm diameter. Glucose oxidase (100 μL) was distributed over the membrane and left for 90 min. Later on, for 30 min the apparent side of membrane was covered with 10 μL of glutaraldehyde (cross linking agent), followed by the membrane placement into phosphate buffer (pH 7) for 10 min. The immobilized enzyme containing membrane was removed from buffer and stored at 4ºC for future use. The glucose concentration was evaluated by exploiting the colorimetric method [24]. The obtained results were calculated and compared with commercially available kits by using the following equation. 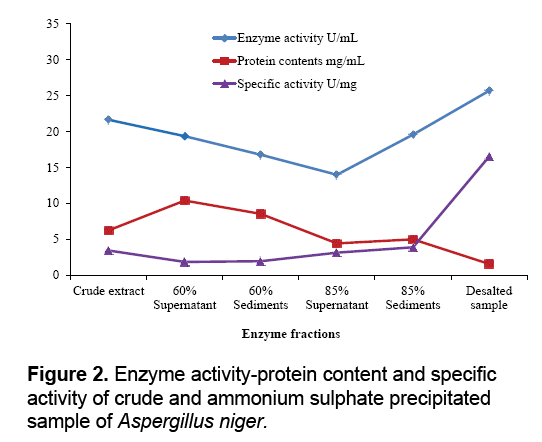 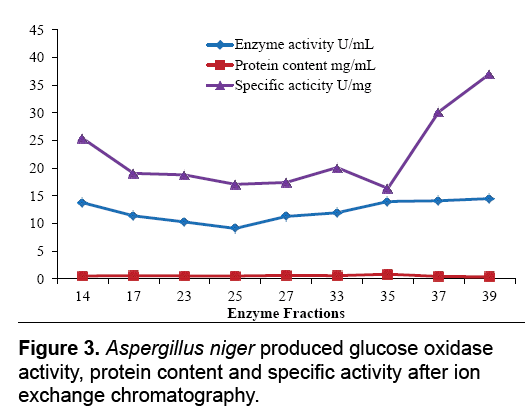 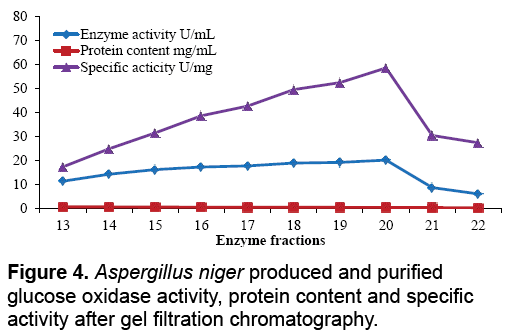 Following immobilization, the enzyme activity was calculated at various wavelengths as well as subjected to glucose identification within the serum. Like the enzyme has been immobilized therefore it can be reutilized, after a week over again the Enzyme activity was checked and the subsequent results presumed demonstrating that enzyme has maintained its activity. The investigation was acknowledged by Luong and Glennon, [28] to ensure the constancy of immobilized enzyme after 22 days. The glucose detected from the immobilized membrane was judged against commercially available kit (AMP). The glucose level detected from the AMP kit obtained 98.09 mg/dL though the results acquired from the immobilized membrane were 85.5 mg/dL. Leary et al. [29] used glucose oxidase technique to measure the glucose quantity present in human blood. Relijic et al. [30] determined 27.8 mmol/L amount of glucose existent in human blood by using oxidase-peroxidase assay with low volume ration of sample. The self-fabricated bioactive solid support was found to be active for fifteen days without any reduction in the activity. The clinical trial was carried out at the Allied Hospital, Faisalabad with the permission of concerned authorities. The appraised glucose quantity was ranged 90-180 mg/ dl when measured with self-fabricated kit. Kuwa et al. [31] found 0.52 mmol/L range of glucose value in diabetic patient when exploited enzymatic method for estimation. Severe diabetic patients’ revealed glucose range of 80 and 110 mg/dl Dungan et al. [32] (Figure 5). 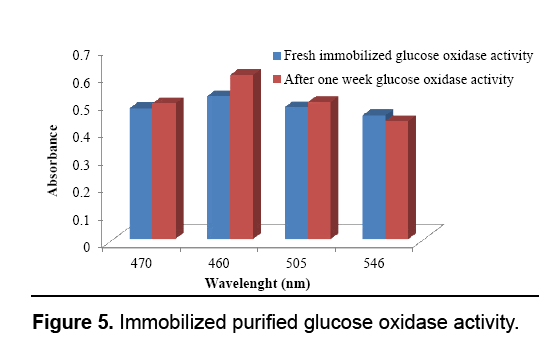 This research work was an effort to make an enzyme activated solid support for the determination of glucose for the development of biosensor. It also exhibits moderate stability with a shelf-life of at least 15 days. The glucose level detected from the AMP kit came out 98.09 mg/dL while the result obtained from the self-fabricated biosensor was 85.5 mg/ dL. The fabricated device provided close results to the commercially available kit. We are assured that the projected glucose biosensor can endow with a consistent, precise technique for the determination of glucose in real samples.

Authors are happy to declare that we do not have any conflict of interest in any capacity.